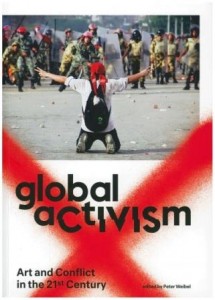 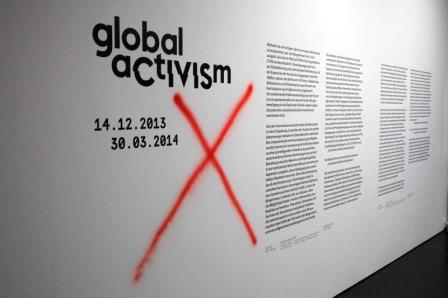 In Slavoj Zizek’s words, “They tell you we are dreamers. The true dreamers are those who think things can go on indefinitely the way they are. We are not dreamers. We are the awakening from a dream that is turning into a nightmare.”

Activism is the art form of the protest movement. It takes place outside of institutions and is socially motivated.

“The new activism is a war between individual and institution, subject and system. Public mass manifestations, from the Puerta del Sol in Madrid, the Tahrir Square in Cairo, the Tiananmen Square in Beijing to Taksim Square in Istanbul, all offer examples not only of the power of the masses, but of the power of otherwise powerless individuals.”

‘Global Activism’ was published on the occasion of the exhibition global aCtIVISm at the ZKM|Centre for Art and Media Karlsruhe December 14, 2013- March 30, 2014. Edited by Peter Weibel, it contains an arresting preface that thoroughly builds the reader’s understanding of the inventions of the government, the people, the state, the citizen, the Individual, the User, the Net Activist and finally the “Artivist.” The book contains a vast database on art and activism stretching back to include the 1970s, as well as contributions by leading thinkers, activists, and artists addressing the many facets of this new social phenomenon.

Peter Weibel talks about the ‘Internet of Things’, which is the outcome of Globalization and Digitization in the 21st century. Political structures which limit civilian rights create a backlash where protest groups such as ‘the indignados or the Occupy Movement become new cultures of repair, which search for ways out of these crisis and the partial inability of politics to act.

In this digital society, citizens have created new forms of organization, as seen in the Arab Spring, power structures can be upended(for a brief period) as the dynamics of control are slowly becoming permeable. For this change in structure, the rise of NGO’s was a preparatory step towards global activism.

“In the wake of the global city and global governance we are now witnessing a new form of social action centered around “global citizens.” They represent the survival interests of all humanity and of the Earth itself which are disregarded by individual states. Global activism thus arises on the bedrock of ‘global citizenship’.”

We are introduced to the idea of “whistle blowing”, recognizing a wrongdoing and taking any viable action to address it. Edward Snowden, Julian Assange, Bradley Manning are exemplarary cases of the new ethics that befits our era of digital control and communications. Slavoj Zizek talks about the threat to our freedom and how these acts termed as illegal by ‘hackers’ provides factual foundation to our premonitions of how much we are all monitered and controlled. “It is one thing to know it in general, and another to get concrete data.”
In his essay, “Distributed Citizenship and Social Media”, Graham Meikle states that, “The crisis is that we are obliged to belong to commercial data-mining networks, even as we may know that they do not operate in our best interests.”

Global Activism by artivists have shown how citizens can- and want to- play a tangible part in overcoming crisis situations. We have seen an interweaving of politics, economy, IT, science and finally culture, too. These new amalgams create a vacuum for new spaces and epochs for our future generations. “The modern state has actually become humankind’s enemy.” The state systems that have brewed for centuries for the security of civilians are now being criticised by activists for keeping them in the dark. Democratic agendas linked to capitalist regimes may no longer create fools out of the public, as the opposition is becoming stronger and ingenious.