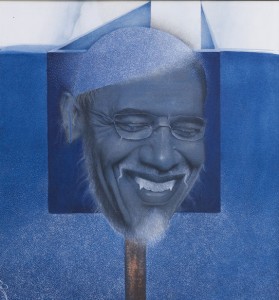 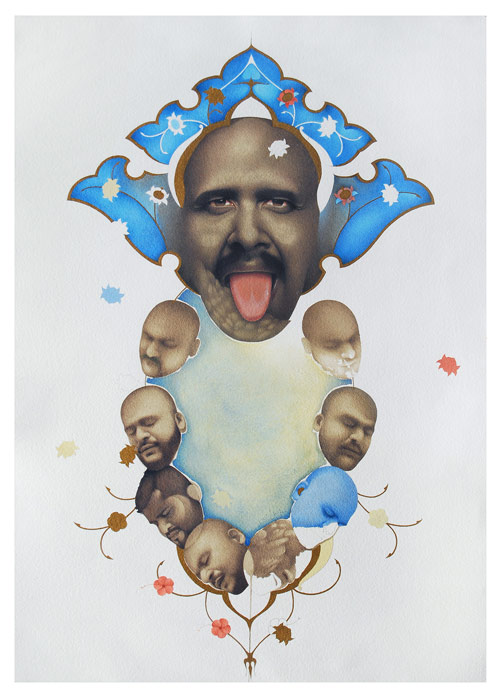 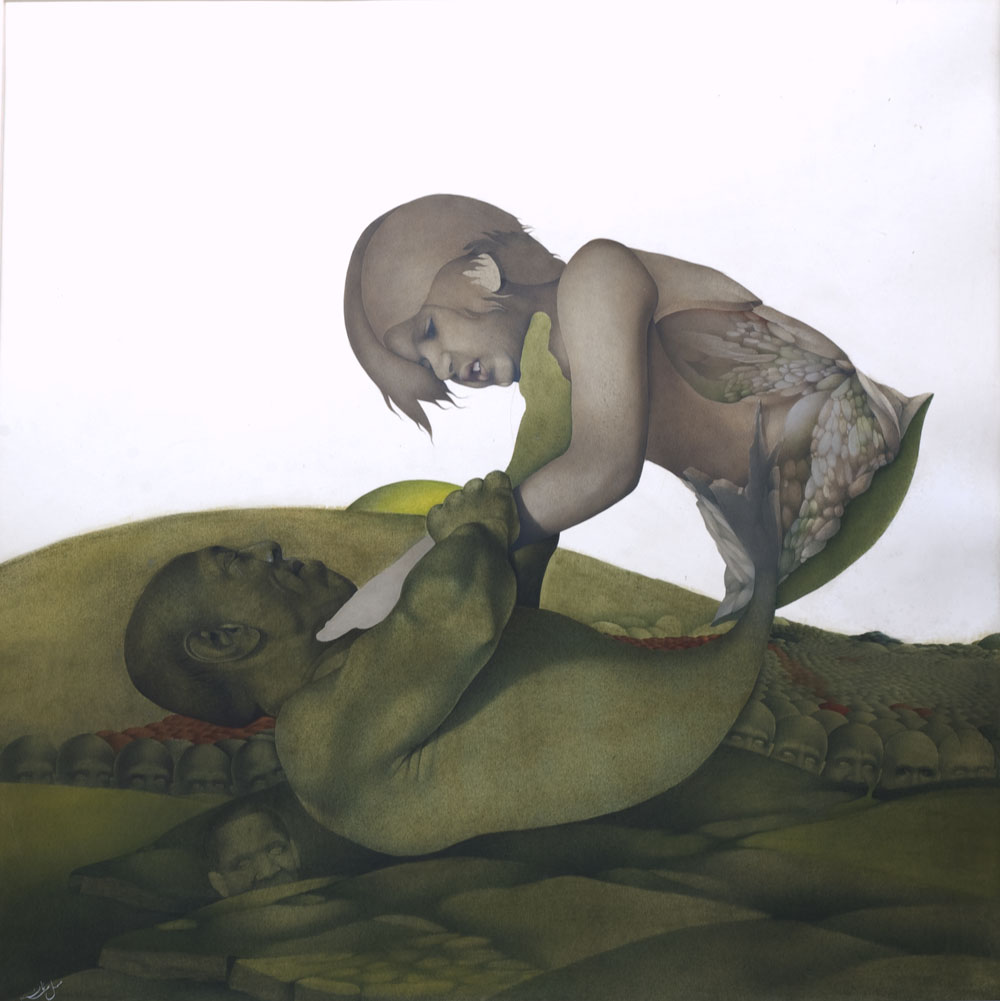 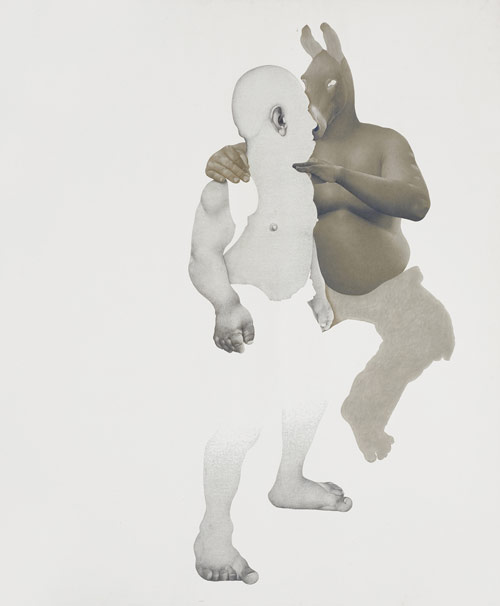 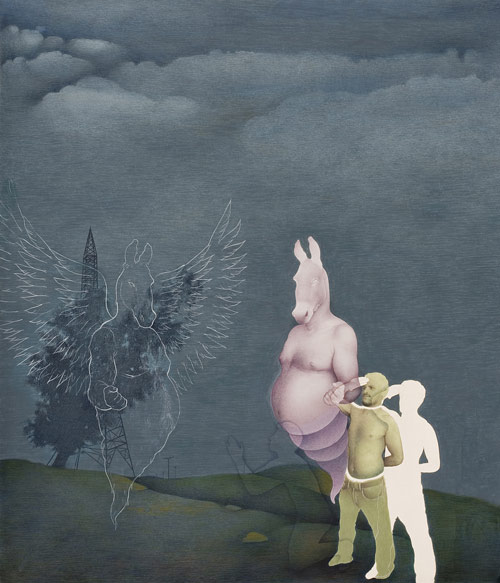 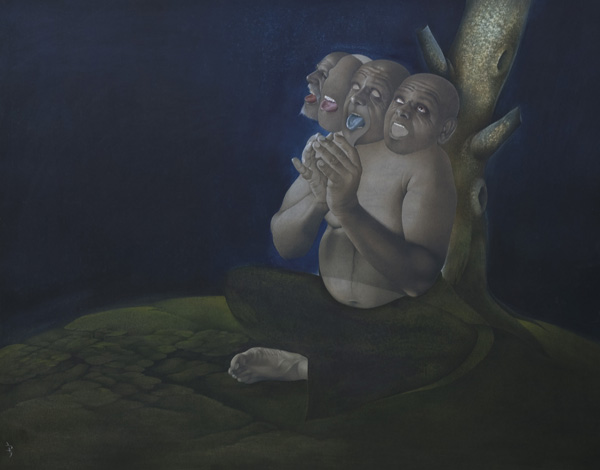 ArtNow: Why did you choose to become a miniature artist? Was it the tempting ‘bandwagon’?

Irfan Hasan: If you see the trajectory of my practice you’ll understand that I had very personal reasons for becoming a miniaturist. The human form and portraiture are the focus of my interest and the passion for figurative painting lures me like nothing else. The way flesh is molded, the way it clings to the skeleton is fascinating. A friend at one of the residencies was an African American and in the sheen and gloss of his skin, I could see an unimaginable array of hues. I have painted him in some of my pieces.

Coming back to the question. At NCA, I realized early on, that painting could not let me explore the deep significance of the human form. Oil painting went as far as teaching me skills used by the European realists. I found that miniature was perhaps the only way I could investigate the intricacies of figuration. That is what led me to miniature and since graduation, I have left the small format and used the instructional value of my years at NCA to develop large scale pieces, some as large as 4 or 5 feet. I was led to miniature by an internal restlessness to discover the human form without limits to where it would lead me.

AN: When artists are able to define the sources of their influence and inspiration, they are always more lucid in their articulation. Can you pinpoint your influences?

IH: Very much so. I know that I used to look at portraits by Gulgee and even works by Eqbal Mehdi and Aftab Zafar in the Urdu digests. Though I now understand the lack of significance in these two artists’ works, as a child, I couldn’t help but be thrilled by the realism of their paintings and the idea of likeness to a living person. Later, in art school I discovered the classicists, down to Courbet, whom I admire immensely and the works of Lucien Freud and Andrew Wyeth. Once I was introduced to miniature my explorations were focused towards the masters of this genre, like the Persian miniaturist Kamaluddin Behzad of the 15th to 16th century and of course, Chughtai and Haji Sharif, who I feel were unwittingly two of the first proponents of neo-miniature. However, my fascination for the macabre and the dark has led to me to investigate other artists like the famous Iranian miniaturist Reza Abbasi and the modern miniaturist Mahmoud Farshchian whose works incorporate political satire and personal angst. I saw works by Chuck Close in New York and his photorealist pieces were riveting. There are other smaller international practitioners who interest me like Alessandro Bavari who incorporates illustration, photography and even painting to create surrealistic scenes.

AN: There is a darkness in your work where the satire becomes biting. Are you pessimistic about life?

IH: No the darkness is not reflective of pessimism but I believe that most of us are conditioned to admire beautiful objects and people and in fact we gloss over things because of this frame of mind. The other side of life is ugly and hideous but it exists as a parallel force and we as artists have a responsibility to portray it with as much meaningfulness. I feel beautiful things are irrelevant and I don’t find it interesting to depict attractiveness. I make my subjects ugly and even evil. My newest work is a self-portrait in the guise of the rat-child of Shah Daulah and I’m quite sure it will repulse people as much as fascinate them. But the painting validates a reality in Pakistan’s culture. This paradox is vital to my work.

AN: What do the zoomorphic elements in your work represent?

IH: During Eid-ul-Azha, we are surrounded by sacrificial animals and most of my childhood I spent looking at these animals. We treat animals badly in our country and the donkey is perhaps the worst off. I have depicted the donkey in many forms in my work, with humour, with bravado and brashness, sometimes even giving it powerful qualities. I have also painted the zebra whose pelt I find fascinating, its stripes are like an optical illusion. The savagery of animals is debated in my paintings; there is no definitive viewpoint as to whether humans are more bestial or the animals.

IH: My residency in India was a soul- stirring experience. It was a very conscious decision on my part to go to the Government College of Arts Kolkata and follow in the footsteps of Abdur Rahman Chughtai. Dr Naqvi the art critic had told me about this historical fact but I don’t think I understood its significance until I arrived there. I stayed in the room where Rabindrnath had stayed and worked. I lived in the building where Abindrnath Tagore and E.B Havell laid the foundations of what we call the Bengal School of Art. It was here that Chughtai found his Muslim roots in miniature through the technique of wash painting. In fact, amongst some artists in Kolkata, Chughtai is revered more than Abindrnath and I feel so honoured to have been able to follow Chughtai’s footprints 96 years after he went to the Government College to study the same genre. Also, one of the artists whose work I venerate is Ganesh Pyne who also went to the same college.

In other ways too, the experience in India was serendipitous. Apparently, Kali the goddess of destruction is one of Bengal’s most revered idols and is seen most frequently in Kolkata. The idea of the overriding force of destruction fit well with my own idea of the malevolence of human nature and I made a portrait of an Obama look-alike with his tongue sticking out like Kali, represented as the overseer of destruction.

AN: You are not a prolific artist. Is it difficult for you to make work quickly? Do you amass your ideas over a long period of time?

IH: Yes, it takes very long for me to complete a piece. But it’s not the execution that’s the obstacle. It’s the conceptual process that lingers and the ideas that crowd my brain. Only when I am able to sift through the ideas and make sense of them, am I able to carry on. The painting called Sinner took me one and a half years to complete, but it was a satisfying experience because the end result was everything I wanted it to be. I have several unfinished pieces in my studio because I am trying to take the idea further and push the boundaries. Until the moment of epiphany comes, they will probably stay like that.

AN: What are your ambitions? Where would you like to be in 5 years?

IH: I think miniature will not serve me for too many more years. I feel my restlessness growing and I want to explore and investigate some ideas further. I think the next step for me is to perhaps study the digital universe with animation and special effects. I know in that field the possibilities to realize my ideas will open up significantly for me.