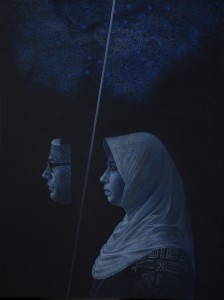 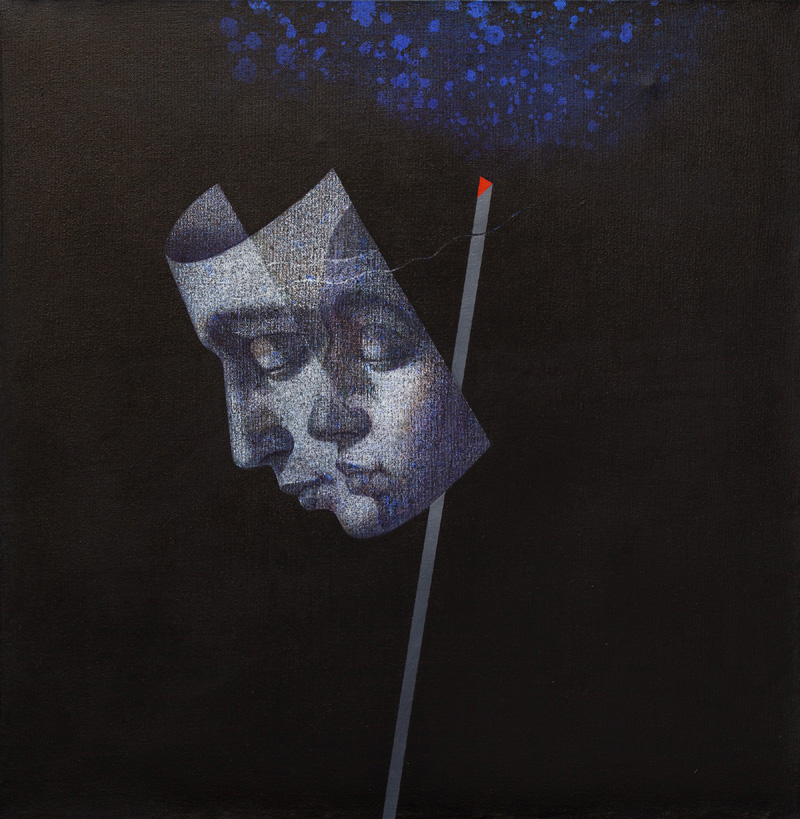 RM Naeem attained his BFA from National College of Arts, Lahore in 1993 and subsequently has held the position of Assistant Professor at his alma mater. Recipient of the National Award of Excellence in 2003, he has held to date, twelve solo shows in Pakistan. As an avid participant of eleven international art camps and residencies over the course of his career, he established the Studio RM International Residency Program in Lahore, in 2008. His work has been exhibited in recently held international group shows including Art Expo, Malaysia, 2010; Slick Art Fair, Paris, 2010; Affordable Art Fair, Singapore, 2011 and Art Melbourne, 2012.

Here, he speaks to Usman Saeed about the details of his education and practice.

Usman Saeed: Your practice has evolved through various places, vocabularies and media. Share with us the events, entities and role models that have shaped you as an artist.

RM Naeem: I value immensely the experience of learning from Sayyed Jameel Ahmad, working as a cinema-board painter in Mirpur Khaas in the early years, where a lifelong interest in painting was established. The intense training from this time included exercises mastering glass-painting techniques along with adorning  mosques with flower-motifs and temples with images from Hindu mythology. Yet, we were not allowed to leave school for the sake of learning to paint. Thus, the idea of the teacher in a parent’s role, as much reposnisble for the child was inculcated in these initial years.

Coming to National College of Arts (NCA) was nothing less than a miracle. A newspaper cutting with an advertisement of the college was delivered to my brother’s shop and the identity of its sender is still anonymous! In the beginning NCA was a cultural shock for me, a place seemingly miles apart from my rural background. However, I remained fortunate to have a collective viewpoint of the three distinguished teachers who were present at the time: Prof. Mohammad Asif, Prof. Saeed Akhtar and Prof. Salima Hashmi- who interestingly upheld completely different schools of thought. To be able to find a path for myself, it was a blessing to be able to partake of the  learning experiences of all these great teachers.

The idea of teaching at the college after finishing my degree was implanted by Prof. Mohammad Asif and Prof. Iqbal Hassan. It was a great honour to be introduced to my first class by Prof. Saeed Akhtar.  This fostering and encouragement by my teachers led me to pursue my duty as a educator very seriously. Gradually through exhibiting regularly, teaching both at NCA and at my studio, running an international residency program for some years and now more recently using the power of media to reach an increasingly wider audience- I humbly find myself to be an active participant in mainstream Pakistani art.

US: Your practice has consistently upheld a dedication towards the representation of the human figure. Could you elaborate on this conviction by decoding in detail, the metaphors embodying the protagonist in your work?

RM: Since the beginning, I set the pace of my work at a slow rate,  trying to avoid fads related to the business of art. The character of the human figure in my work has remained constant while the element of change has been depicted with the study of age. When I portray a child, the idea of toying with the future comes into focus, whereas an old man is meant to represent maturity and a timeless aura. My work is inhabited by a protagonist who is humble and submissive, like a sufi. I tend to refrain from making work charged with terror and harshness, thus there is a considerable effort not to hurt anyone on personal, political or religious grounds. The aim has been to induce a certain sense of calm in the viewer. A message of peace lies at the heart of my work enabling it to exist and in dialogue with everyone, irrespective of the prejudices of caste or class systems prevalent in our society.

However, sometimes my subject-matter is provocative with a blatant dose of graphic and disturbing imagery, which I liken to the act of vomiting; my anger and reaction towards negativity surfacing as catharsis. The abnormality in relation to the human form is similarly depicted to address wrongdoings around us.

My purpose in making art is to develop ‘relationships’ whereas notions of good or bad, positive or negative  is manipulated through interpretation. I dislike the fact that art today has been pigeonholed to cater to specific classes of people. When it comes to having ideals in reference to the reception of my work, I prefer not to make distinctions between the masses and the elite. I believe when one works only for the elite, there is a need to be like them. Then the goal becomes self-serving and not collective furthering.

Representing urban structures like poles bearing road-signs have been recurrent in my recent work and are meant to comment on notions of law and order. They stand for demarcations, barriers and limitations that we are aided by or confronted with, on a day-to-day basis. They allude to the spiritual connotations of these public symbols, devised to ensure our safety by keeping us on the right path.

US: Pinpoint for the reader if poetry, literature or music have inhabited your work and have played an important role in the development of your work over the years.

RM: Being primarily an image-maker, I adhere to the old mantra: a picture is worth a thousand words- but at the same time, I regard great poetry as the best tool to enhance an artist’s visual vocabulary.

In poetic terms then, music for me is just like ablution leading up to the act of prayer. Like practicing a ritual to enter a different state, I do tend to turn on harmonious sounds before I work- thus creating a doorway through which I must pass to get into a specific condition of mind.

US: Your willingness to mentor artists is commendable as Studio RM’s International Residency program in Lahore is now running in its 5th year. Promoting art education for the last nineteen years, Studio RM is a powerful source of inspiration for young enthusiasts, who dream of pursuing art as a full-fledged career. To arbitrate and channelize the energy of young adults, what constants do you instill in your own persona?

RM: In my opinion, a good teacher holds qualities of both a warrior and a sufi! He knows when to fight and when to stay silent, as time prescribes. A common misconception about me is that I am a ‘strict’ teacher. I always clarify that instead of being strict, I am disciplined.

One way or the other, each student keeps a check on the teacher while being taught. Teaching at any level requires a suitable rephrasing of sorts: from a distinct outlook of the teacher to encompassing a distance filled with a mutual respect. The matters of respect are chiefly attained through knowledge and in turn, through the right delivery of that knowledge