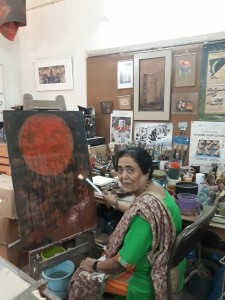 In Conversation with Riffat Alvi

Artnow’s Noor Ahmed in conversation with Riffat Alvi about the artist’s expanding and evolving journey.

Noor Ahmed: We are a month away from your seventieth birthday; how old were you when you first felt an affinity towards art?

Riffat Alvi: I loved using my hands to create something. I remember being eight years old and moulding clay into figurines. The physical act of sculpting and creating was very satisfying and I realised it was something that I was good at. I was apprehensive of what my family, in particular my religiously inclined mother would think, so I would make the small clay figurines and then hide them behind flower pots in our garden. My mother would sometimes find them and get very upset at me and tell me that angels would not come into the house if there were ‘idols’ inside our muslim home.

NA: In many ways art allowed for you to maintain a certain autonomy that women of your generation did not have.

RA: That is true but I didn’t foresee this. I was never good at math or history and by the time I finished school at the Convent of Jesus and Mary I was sure that I wanted to enroll at an Art School. At the time, Rabia Zuberi’s Karachi School of Art was the only art school in Karachi. My mother did not want me to study further but Rabia Apa was instrumental in convincing my parents to let me attend. Spending the next four years at KSA and learning from Rabia Apa, Hajra Mansoor and Mansoor Rahi was a dream come true. Upon gradating in 1973, my sisters were all married but I was confident about wanting to dedicate myself to art- that is what I chose to be married to. I’m from a military family but I enjoyed the luxury of being in a field that was free from military intervention. I got a job teaching art in schools but eventually found that limiting. In the 80’s I began working for the Sindh Small Industries as a Designer and would travel all across Sindh studying local artisans and their craft.

NA: I can certainly see the influence of your time at Sindh Small Industries in your work, particularly in the ‘Conference of the Birds’ series that are a kind of painting/sculpting hybrid. But for a long time you identified not as a sculptor but as a painter- why did you try to separate the two?

RA: Mansoor Rahi told me that I had a talent for painting but I really became a painter instead of a sculptor as a compromise to my mother. The sculptor in me never really went away though; even my early oil and watercolor paintings from the 80s were very layered. Then upon a visit to Zimbabwe in 1991 I came across Helen Leros who was working with earth pigments in emulation of the indigenous folk artists and I was inspired to substitute my chemical tube paints for this natural pigment. We are made of earth and to the earth we shall return so I thought it was very appropriate for earth to be the medium through which I explored the nuances of lived experiences. The first pigments that I collected in Zimbabwe were scraped off the side of a hill. It was very hands on in the same way that sculpting is.

NA: The physicality of the material is reflected in your pigment paintings but there is also a real engagement with history and your surroundings. Your 1993 show at VM Art Gallery, ‘Lost Civilisations’ was your first major show using this medium. The paintings, with their rich maroon, brown, ochre hues came across as archeological finds from the sites that had inspired you, as if their history was reincarnated through the lens of the artist. Did you mean to become the arbiter of an alternate, living history?

RA: That show was about Mohenjo-Daro and the Altamira cave paintings from Spain. Both civilizations were no longer in existence so I felt an obligation to bring them back to our reality. In fact the pigments I used were sourced from the Potowar plateau and Spain. The more I layered this mixture of ground earth, resins, and binders onto the wooden base, the deeper I felt I was going in to the layers of the earth. The physical act of painting felt like the act of tayammum (ablution to cleanse before our daily prayers), both physically and spiritually.

NA: Some of your work from the 90s like ‘The open Door’ features such thickly applied pigment that it looks like exposed earths crust. The lines between two dimensional and three dimensional work are also blurred during this period and the symbol of the bird, which seems to be something of a personal totem for you, is introduced during this time. What caused this progression?

RA: Karachi was rife with unrest in the 90s. A colleague likened the lawlessness and commotion in the city to Farid ud-Din Attar’s 12th century poem ‘Conference of the Birds’. The personification of animals to creatures with the same kinds of feelings and concerns as humans, caring for their young the same way and dealing with similar notions of self preservation was comforting to me. It provided some distance and thus some clarity to observe myself and my kind. This reflection resulted in a series called ‘Song of the Birds’.

NA: ‘Song of the Birds’ was a series of wood panels covered in earth pigments and sculptural details in the form of rickety ledges upon which sat hundreds of birds. Your time at the Sindh Small Industries is reflected here because I believe you worked with local potters to develop the bird. How did this affect the making of the series?

RA: I moulded one bird and then gave it to the potters to create lookalikes in bulk. Our local craftsmen are also artists but they rarely get appreciated. Their contribution allowed me to fulfill the vision I had and together we made something new.

NA: You chose to work with local potters but the black and white birds in your work steadfastly refuse to intermingle. They seldom even appear on the same panel. What significance does the color hold?

RA: Both birds are identical in size and shape, the only difference in their appearance is their colour. The more significant difference is that the black birds sing whereas the white ones are silent. There is a great number of both of them but they cannot talk to each other. What ensues is the chaos of the Conference of the Birds.

NA: Speaking of black and white, your smoke paintings which began in the early 90s, also follow a strict color code. The abstract figures made from black smoke are all the more haunting when paired with the brilliant white of the acrylic background. Why these colors and why this medium?

RA: 93-94 was a very sensitive time in Karachi. Body bags would fill the streets and sectarian violence was as jarring as it was becoming common. I happened upon this medium by accident when carrying a flame too close to a canvas during a power outage, but it seemed like the appropriate channel to talk about the violence. The black and white stand out just like the crime that they represent stood out. I also like that one can’t sense the structure of a pencil or a brush or a human hand with this method of drawing. The possibilities of interpretation are endless. The small touch of red acrylic amidst the smoke signifies the atrocities that are inflicted on man by man.

NA: So while you were investigating the loss of humanity and logic in the smoke paintings you were also charting a physical representation of loss in your nail and screw works in the 2000s like in‘Bhulay Raastay’ (Lost Ways)?

RA: In ‘Bhulay Raastay’ I was hammering nails and screws onto a wooden board. The act was physically demanding but it was also cathartic because it acknowledged the loss and suffering that was prompting the smoke paintings.

NA: You have been a working artist since before you became Director at the VM Art Gallery since its inauguration in 1987, but your work as an artist has largely been eclipsed by the role of Director. Few would brave the loneliness and scant rewards of such a commitment. Has it been a challenge maintaining both Director and Artist personas?

RA: I think an artist must learn to take criticism and this balance of both personalities has been critiqued. If one is fortunate enough to learn a skill you must distribute that skill to the next generation. I feel as if this gallery was made for me- i’ve spent 30 years here. I also feel that the art that God put inside me was supposed to become my future. It hasn’t been easy though. I’ve had to look at my work and also the gallery and also make sure that I am fostering a new generation of artists. Sometimes I feel very guilty as if I am neglecting my practice so when I come home from the gallery at 7 30pm, that is when I start my day in the studio. Sometimes i’m here till 2, 3 am. When I am in my studio I forget about my other commitments.

NA: What are you currently working on?

RA: I’ve really been enjoying working with terracotta and installation. I take plenty of inspiration from translations of the Quran and one such is the mention of khankhanatee mithee’ (Shimmering Soil). I made an installation piece called ‘khankhanatee Mithee’ that is made up of terracotta pieces suspended on fish wires. When the wind blows or if someone touches the piece it jingles. This idea is what i am currently investigating.

NA: ‘khankhanatee Mithee’ engages multiple senses. Do you like the possibilities that this manner of work affords?

RA: Yes I certainly do. Since making this piece I have noticed that I paint on canvas a lot less because I am at a point where I find my installation pieces are more engaging means of communication. The possibilities are endless.

NA: Ample possibility seems like a good note for us to end on. Thank you Riffat Apa.

One Response to In Conversation with Riffat Alvi