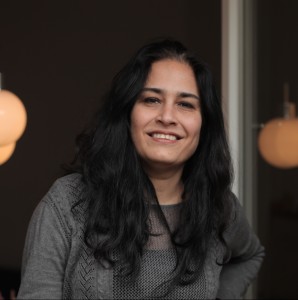 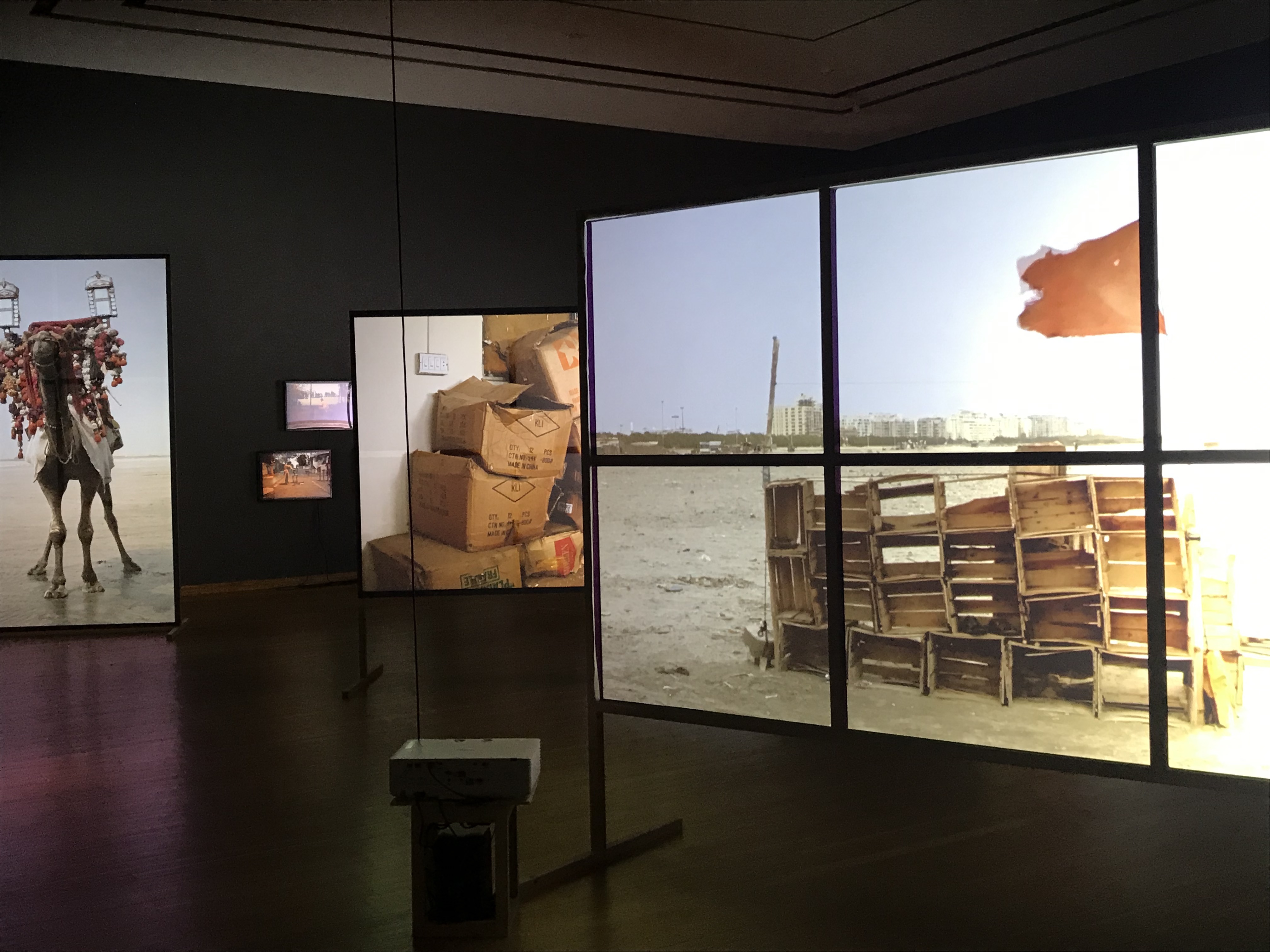 The Artist is awake; Bani Abidi

I was a regular passenger of the Lahore intercity Daewoo in my undergraduate days on my way back home. One day halfway through my journey, the door slid open upon a stop and a woman forced herself in against the wishes of the conductor. The conductor had a polite inquiry which became assertive and loud in a few seconds because she wasn’t giving him the correct answer. He asked on repeat “jana kahan hai?” “Where do you want to go?” and she replied on repeat “gher jaoun gi “I have to go home”. Her answer was right but the conductor’s expectations were different. ‘Us’ the lady passenger’s on the lady’s side of this comfortable air-conditioned bus ‘chaotic at times’ gazed intently at her but everyone turned heads when she began to sing “lambi judai” (‘a long separation’ – a famous Pakistani song) on a creakingly loud note in her coarse voice and proceeded to sit with us – she sat next to me in a horizontal line of eight to ten women. Her clothes were in tatters, her hair as if it had never been combed, in all honesty she was the definition of what we the people call ‘mad’ in our unnerving ‘normal’ world. She held my wrist with a force and asked me the time, in the same tone while singing, I wasn’t wearing a watch but I looked at my wrist; saw the time on the bus’s digital clock and quickly told her, she said thank you, stood up, and left us as soon as the door slid open on the next stop. The memory of that woman, her singing and her destination always comes back to me when the normalcies of our world begin to agonize. I interviewed artist Bani Abidi in 2013, it was my first Art Now assignment and I emailed a list of questions to the artist as she is based in Germany now. I remember thinking about this woman in the bus through the limitless surveillance of the artist’s work – for me Abidi always puts it–as it is. An art of security barriers – words in a vacuum of their own loss, erased notes of time, lines, yellow zones and distances which consume, exhaust and kill – for me this woman on the bus is the one who was left back when all of them ‘died laughing’ and she had no choice but to sing out loud and only wish to go home and search for time on wrists with no watches.

The life of the artist and her work are weaved in nuances. It had taken me a while to come up with ‘just fragments’ of worthy questions for Abidi (2013) and she replied to them in the tone of her own work. Her response to the emergence of individual characters in her works was: “…the more recent interest in individuals comes from a curiosity about human eccentricities as ultimate manifestations of agency and independence. I think a lot about how people cope and get by day to day in cities like Karachi. I think about disappointment and despair and ways out of it…” (Jalil, 2013)

Her works move beyond the initiation of tangled-unfiltered nuances to being independent – glorious – soundscapes. A retrospective exhibition titled ‘And they died laughing’ is currently on display in Berlin, Germany from 6.6. — 22.9.19. It encompasses a body of work from over two decades.

In ‘security barriers A-L’ (2008) A white noise is born with almost a biological dissection of a varied number of security barriers /basic-mechanical structures – types and forms are designated for different spaces and occasions and Abidi’s role of projecting them with labels in a white space is almost a surround-sound, echo experience – one can feel and believe in a sound of fear, a fragile environment which delves around a yearning and urgency to secure and safeguard but is this safety only the privilege of a fancy-few – who is important enough to ‘safe-keep’ in nations like ours?

If Edward Munch was alive and in our time he may have exchanged his painting ‘The Scream’ with Abidi’s laughter from ‘AND THEY DIED LAUGHING’ (2016). Again there’s a tug of war, agony and ecstasy push and pull each other, individuals laugh hysterically and the title’s suggestion of death by laughter (Shakespearean pun) flips the perspective. This laughter has a painful sound, it is an escape but at a grand-cost of having no alternative but laughter – or death. These protagonists are exhausted; circumstance has left them no choice but to die laughing.

I see Abidi’s water color series ‘The man who…’(2015) uncomfortably in synch with the traffic and culture of social-media blogs where the aim is a following of thousands . Andy Warhol is known to have said that everyone is going to be famous for 15 minutes, in the future. This recognition, plastic-fame (I may call it), squeezes out a space in an urgency to prove the one going with it…has some talent or prowess to be acclaimed and followed for. The title of Abidi’s work has been appropriated from the novel of Russian conceptual artist Ilya Kabakov’s ‘The Man who flew into space from his apartment’. These works, watercolor drawings of protagonists surpass all tests of idiosyncrasies to pave their name in history mainly via the Guinness book of world records, records range from ‘a man who could split a hair’ to ‘the man who gave up’ in Abidi’s creative constructs – yet the difference between the social media culture and these ‘repetitions and obsessions’ is of hardcore discipline and loyalty, Abidi pays them a genuine ode – probably there is nothing so ordinary about an ordinary man. ‘The man who…’ series, Shan Pipe Band learns The Star Spangled Banner (2004) where a band-legacy with tones and beats from an imperial past have superfluously evolved to desi-weddings and Abidi interjects by making them perform the American national anthem – The Karachi series (2009), Pakistanis who are from a range of minorities carry out their domestic acts on the streets of Karachi – the work makes their form appear statuesque , the roads are empty, it’s the holy month of Ramadan for the Muslim majority and all roads are empty during the opening of the fast. A sound of belonging, desire, ambition, confusion, pain and hope weaves through this image-making. Video, photography, drawing and sound walk along in curiosity of truths, never shared.

The dilemma and struggle of ‘being human’ is the apex of all dialogue here – VIP culture, waiting in visa offices with a thrashing heartrate, reactions, conditions, a line on the forehead, a tap of a finger, sweat, tremor, a belief and disbelief in going to promised lands, the unanswered question of what makes us different … religion, culture or a border? Abidi’s Section yellow (2010), The distance from here (2009) , Reserved (2006), Memorial of lost words (2016) and also the earlier works such as Mangoes (1999), News (2001) and Anthem (2000) present themselves as Contemporary Allegories or fables – the moral of the fable or metaphor of the allegory though – has been grinded under nationhood-adulteration and fluctuates between dystopia and utopia, victim and oppressor, developed and developing, then and now, them and us. Borders, boundaries, obsessions, possessions and reformations – everything merges. The fable becomes a crystal clear fact. When asked about the link or division between fact and fiction in her practice Abidi responded: “I basically made up my own stories about Pakistani society in the 80’s. I made up lies to critique the lies that were fed us” (Jalil, 2013)

Abidi has lived between Karachi and Berlin through these two decades of her practice. Her own life and experiences, social –political – ethnic – personal, are precursors for her observations and interventions. Abidi’s practice continually and forcefully reminds me of a consciousness. It reminds me that the artist is awake and that after all the lies and truths have been inhaled and exhaled: poetry survives.