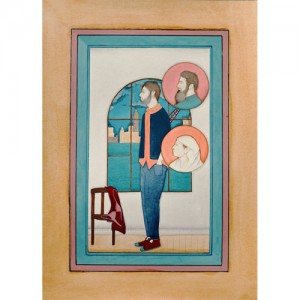 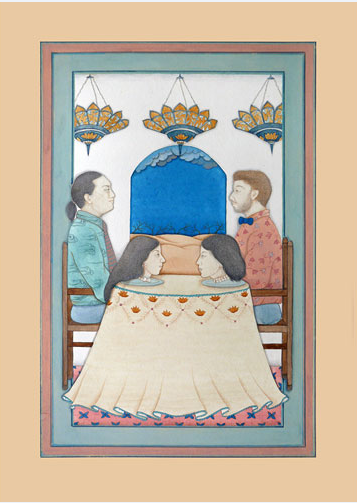 For a long time, Chinese contemporary art in New York art caught the eye of Western art-world professionals and collectors, but that is now changing. We have instead the phenomenon of a steady increase in interest in contemporary South Asian artists. The miniaturist painter Hiba Schahbaz belongs to a burgeoning group of Pakistani artists whose presence in New York more or less began with another Lahore-trained miniature artist, Shahzia Sikander. She stood in the spotlight alone in America for a few years, but recently others have been making their way through the maze of art activities here in New York, where the interest in cultural difference is strong, if a bit uninformed. Schahbaz, a former student of mine, has felt comfortable in New York—to the point where she was pursuing an increasingly complex and intriguing series of personal references. Daringly, for someone from a Muslim culture, she has even painted pictures of herself lying nude in visionary gardens; her visual candor so far has had no repercussions. Although she risks disapproval, acts of visual reticence eventually are discarded by artists like Schahbaz, whose miniatures exist as acts of independence—to the point where she thoroughly subverts the genre.

The small but exquisitely defined works include twelve portraits of real people—friends and family and the artist itself—and twelve traditional miniature paintings. Both groups of images are quite small: 7 by 6 inches for the portraits and 12.5 by 9 inches for most of the traditional miniatures—two are 12.5 by 18 inches in size. While Schahbaz has respected the smallish dimensional paradigms of her chosen art, it is also clear that she has deliberately flouted the rules in a number of works—for example, the nude self-portraits, or the picture Super Mik (2012), in which a young man with glasses gives us his profile, which reveals a Superman suit under his shirt and a tie that falls beyond the painted oval into the white frame of paper surrounding the image. Clearly, the artist is interested in contemporizing the genre, even if it undermines the tradition she belongs to. This may be the result from her stay in New York, where she was educated at Pratt Institute in Brooklyn. But it is more likely that the rebellious description of life now stems from Schahbaz herself, who slyly puts up work that pokes fun at tradition as much as it edifies or entertains. In any case, whatever the reason, a bit of disturbance is found in many of the images.

This does not mean that her work is politically oriented. It is not. Rather, the disruptions often suggest that the artist is struggling within herself, focusing on psychologically descriptive imagery. For example in the portrait series, there is a gouache and watercolor Self-Portrait (2011) that is dispassionately painted and would be seen as restrained—if it were not for the red band of cloth covering her mouth! The work’s impartial aura is achieved because Schahbaz has great skill, yet it suggests that there is some kind of tension going on. Why would the artist even want to make a work in which her speech is curtailed? Who is responsible for the restraint? Is this image referencing politics or personal feeling? Why is Schahbaz’s own face calm when she cannot speak? There are no answers to these questions, and part of the painting’s seductiveness has to do with its refusal to reply to the queries it generates. This work, like a number of the artist’s paintings, demonstrates a taste for idiosyncrasy that borders on the absurd. So, as a result, it turns out that Schahbaz is in fact communicating with her contemporary colleagues by inventing a vernacular that is mysterious and tends to stretch beyond the problems of nationality, ethnicity, religious preference, etc.

Schahbaz achieves this deftly through the art of the poetic incident, which holds onto lyric feeling as a defining feature. At the same time, she is perfectly capable of staying within the confines of her own culture—for example, one of the portraits shows a Muslim woman who is covered entirely except for her eyes. Called simply Lady in Black (2011), the image reminds Schahbaz’s Western audience that she belongs to a Muslim culture and relates to it without exoticizing that world, as so many Westerners might do. Bilal (2011) depicts a bearded man with a bird against a blue background. His dark blue, short-sleeved polo shirt contrast nicely with the cerulean ground, and as a surprise, Schahbaz adds a blue-green parrot who sits on the subject’s shoulder, but backwards so that the bird’s head looks the other way to the left, in contrast to Bilal’s right-facing profile. These images possess a nearly classical gravity, even when Schahbaz is depicting something unusual or whimsical, like the parrot in Bilal. It is important to recognize that like most postmodern artists, Schahbaz has the right, the inclination, and the ability to destabilize and transform the genre of painting she has learned so well. This does not mean that the artist deliberately destroys the medium, either technically or thematically; instead, it indicates, perhaps, some impatience with the narrow parameters of her particular tradition.

Certainly Schahbaz challenges her legacy when she portrays herself nude, in provocative poses that are transparently erotic. There are a pair of works, Blue Mountain I and II (2011), that show lying naked on her belly in what would be traditional scenarios, if it were not for the fact that in the first work horned devils look at the scene from the bottom left, while in the second scenario, coiled barbed wire separates the gorgeous girl from anyone reaching her. It is certain that the artist, having been trained traditionally in art school in Lahore, knows she is transgressing the genre, but then she is someone working in America, where almost nothing is over the top. Yet, even so, the eroticism is gently portrayed, with the figure of the artist staring steadfastly into space and the trees hanging over her beautifully described. In both these paintings, nature plays a protective role. In Day of Fire (2011), Schahbaz uses gouache, tea, and gold leaf to make a haunting painting of a portico, on which a rug and four pillows are placed. There is a golden jug and golden glasses on rug, a nod to alcohol. But at the top of the hills beyond the porch we see wavering flames, which are as beautiful as they are destructive. This is Schahbaz at her best, working poetically with a primal image.

Another work, clearly one of most accomplished, has the astonishing lucidity of a dream. Self-Portrait in Cage (2011) presents Schahbaz’s head in a birdcage, with many birds mobbing the cage. The birds fly under a canopy, beyond which are rolling brown hills and a slate-blue sky—It is a portrait of a quiet apocalypse, if such a thing were possible. Schahbaz’s work gains our attention because it is highly imaginative and is beautiful even when seemingly decorative. Her nudity is, I think, both a response to her stay in America and a young woman’s declaration of independence. The classicism of her art shows us that it may be possible to continue the legacy of her predecessors, even if it means stretching the genre with a certain degree of rebelliousness. We are the lucky recipients of her subversion.

Jonathan Goodman is a teacher and writer who specializes in writing about Asian, particularly Chinese, art. He writes for Art in America, Sculpture, and Yishu, a publication dedicated to articles on contemporary Chinese art. Currently, he teaches at Pratt Institute and the Parsons School of design, New York City.