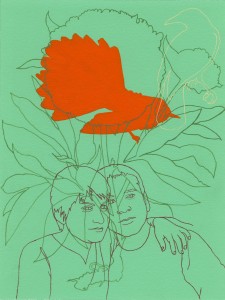 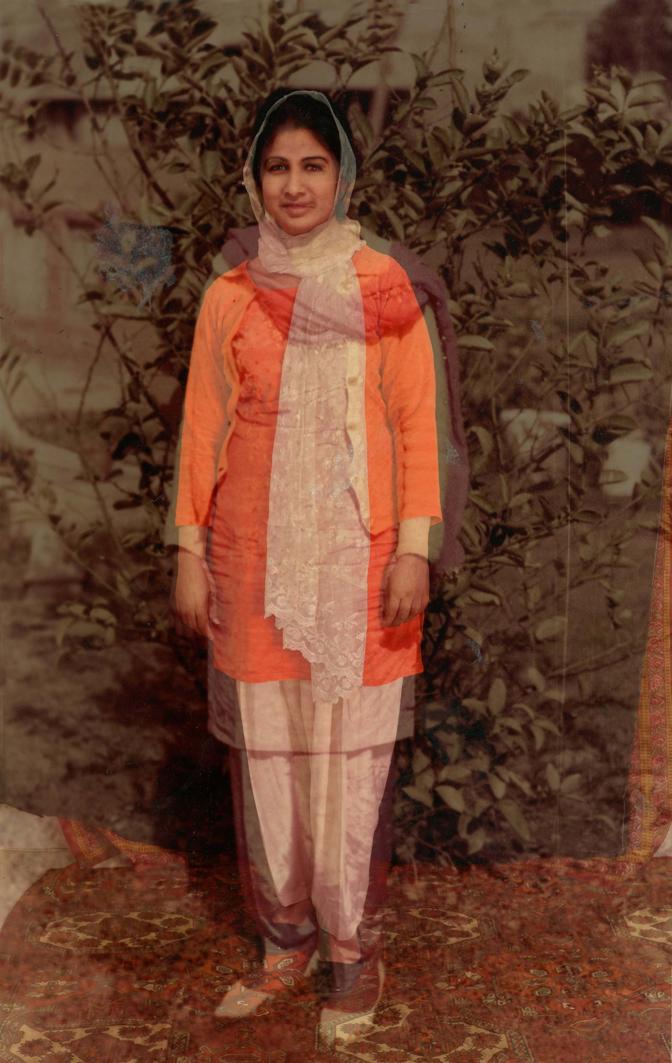 Fifty Shades of Emerald, “Desires of Memory”, and other tales of nostalgia

Not fifty; there were twelve. Twelve shades of emerald, serving as backgrounds for twelve paintings. Layered upon with a mélange of linear imagery in varying colors, the paintings in “Desires of Memory,” a solo show by Nusrat Latif Qureshi at Rohtas 2 Gallery were emblematic of her consistent practice in the tradition of contemporary miniature.
Each shade is more exquisitely beautiful than the other and causes one to wonder if these shades, devoid of the multiple and extensive layers of re-presentations of memorabilia, would not have been enough to evoke pertinent responses. Certainly, the discussion would have been different had it been depictions of shades of the color alone. It may then have elicited deliberations on the context of contemporary miniature and its relevance in the postmodern and contemporary art world.

The layering, however, makes the paintings resonate with echoes of the personal, and causes one to pause and ponder over the significance of each individual image. It facilitates a conversation about sounds and vestiges from the past. Interweaved images, from the artist’s personal family and other photographs and from colonial drawings and paintings of birds and plants, communicate a desire for visiting memories of places and times through mists of nostalgia.

Nusrat’s earlier work has been similar in execution, visual format and presentation. However, the iconography employed by her previously had resonances of collective histories of the colonizer and the colonized, presenting for discussion issues arising directly or indirectly from different cultures’ attempts at hegemony and the resultant resistance by the natives. These dialogues of dominance and bondage; of submission and sadism; and of a certain masochism borne out of ages of human civilizations, have hitherto been the mien of her artistic and intellectual preoccupations.

This is not the case in her recent work where she mines the personal for making meanings that strive to be apolitical. Of course, it may be argued that absolute apolitical-ism is a fallacy, as it may not be possible to escape the boundaries of the polis, and that even personal histories could hold similar aesthetics of relations.

Regardless of the denotations and connotations contained within and without, Nusrat’s works are visually beautiful. Beauty, in all the ways that it is defined or perceived, whether relevant to the relative aims of art or not, is. The extensive discourse about aesthetics through history proclaims this. The definition has varied and expanded over times to conflate the exotic, the grotesque, the seductive, and other alternatives. Beauty, being conscious of itself – of its power and limits – need no longer be naïve or a cause for ‘intellectual embarrassment’. And even though the asserted aims of art in contemporary times seem to render the visual, or the aesthetic of the visual, secondary, only the “Brillo Box [was] somehow the fulcrum” for Arthur Danto’s philosophy of art, and not other such similar works in Warhol’s oeuvre. As Danto himself says, “it had to have been because it was somehow visually outstanding”. It was both the aesthetic and the ideas invoked by this work that brought about such a ‘re’-defining of art and its purpose. The aesthetic of a visual is not a negligible factor, and serves as a means towards the end, whatever that end maybe – even if this end or “purposiveness [is] without a purpose”.

The distinct purposiveness that is pervasive in the works on display in Nusrat’s solo show is the idea of representing the real and the remembered on two-dimensional surfaces; a representation which is neither real nor beyond reality: as mirrors reflect and imitate the real world but also show us something that is not visible to us otherwise, namely, our selves.

The digitally manipulated and layered prints linger on similar refrains as her hand-painted works in gouache on paper, albeit through a changed instrument – tools and form more illustrative of this age of (post-)mechanical reproduction. While these works are the beginnings of the artist’s explorations of the processes of digital reproduction, her hand-painted works exhibit a technical proficiency verging on manual reproduction. The studied precision and calculated measure, whence the color does not fluctuate and the brush does not falter, is characteristic of much of her own earlier bodies of work, as well as of other traditional and contemporary miniature painters.

Nusrat’s work, though only symptomatic of a global phenomenon, makes one question the relevance of the critique of art as commodity and of the role of the art market in the production and consumption of artists’ works. One may continue this verbose discourse, but the fact remains that “the excess of reality, and the fact that the excess is writing, are only the strongest signs of a general uncertainty about what picturing now is.” Maybe this absence of certainty could yet beget new meanings and even newer forms of art.

Desires of Memory ran from 15-31 January at Rohtas Gallery 2, Lahore.