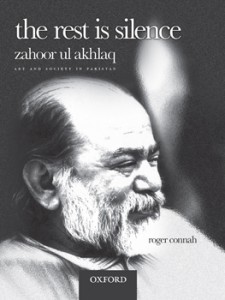 The Rest is Silence: Zahoor Ul Akhlaq: Art and Society in Pakistan
By Roger Connah. 350 pages. Oxford University Press.
By Zarmina Rafi
While Roger Connah’s The Rest is Silence does chart important events in the life and art career of eminent Pakistani artist Zahoor Ul Akhlaq it is hardly a conventional biography. Connah’s book makes note of milestones in the artist’s life beginning with his time as a student and later as a professor at Lahore’s National College of Arts. It takes us through Akhlaq’s travels and academic appointments to various other cities including New Haven, Toronto, Montreal, London and Ankara. Connah presents the artist to us in various stages of maturation, as Akhlaq moves from being calligrapher to painter to print maker and finally to sculptor of three dimensional forms. For the reader who may be mainly interested in reading about the artist, the style in which Connah structures his book can seem like an uphill climb at times. One can get caught in Connah’s narrative digressions before getting to the meat of the matter, and one attempt to sidestep them altogether in order to get to get directly to Akhlaq.
In his own words Connah says his book is “an invention” and “an experiment in biography”. Looking at the “art and society” label in the book’s title we can surmise the book is also a way of understanding Pakistani art and society through the persona of one of its most famous artists; as Connah puts it, “the artist (Akhlaq) was Pakistan in all its instability, identity and uncertainty.” The Rest is Silence is so much a non-conventional biography that a birth date for Akhlaq is not provided until halfway into the almost 400 page book. What then are we to make of such a literary experiment? Instead of an easy-to-unfold narrative why undertake an experiment in order to talk about one of the most accomplished modern artists of Pakistan?
It is important to note that Connah never met Akhlaq in person. However, after Akhlaq’s death, Connah was asked by the family to serve as indexer and archivist of the artist’s works. He was given the important task of opening up the locked Lahore studio and of putting together artworks spread over various studios in various locations. In this respect, The Rest is Silence mimics the act of collection from various sources and presents them in textual terms. Having been privy to notes, paintings, and fragments found in Akhlaq’s ateliers, Connah imparts to the narrative this essence of fragmentation in its recounting and its recollection. Further, Connah’s impressions of the artist all come from the accounts of others, include Akhlaq’s friends, students, colleagues and others invested in the art world. Connah interviews people from Akhlaq’s student days in England, includes recollections of Akhlaq cooking with friends in Montreal and notes the artist’s father-in-law’s impressions of him. In these accounts we get the meandering quality of the narrative and the many facets of Akhlaq: the genius, the generous, the irresponsible, the Sufi manqué and the enigmatic.
As a non-Muslim and a Westerner, Connah is also interested throughout in capturing his encounter with Pakistan, especially in the cities of Karachi and Lahore. He traces the history of Islam in the region, meditates on Sufism and offers thoughts post 9/11. In this sense Connah’s own notes are a travelogue of sorts weaving in and out of the narrative proper. Connah’s interest in other writers, philosophers and cultural commentators is evident as his entries on Akhlaq and on Pakistani society are often mediated through quotations by the likes of Rainer Maria Rilke, Roland Barthes, Jean Baudrillard, V. S. Naipaul, Sara Suleri, Susan Sontag and Theodor Adorno.
As a biography the book also covers Akhlaq’s untimely death in some detail and the aftermath of the murder on the artistic community in Pakistan. The book however sheds little light on Akhlaq’s relationships with wife Sheherezade Alam and his two daughters. Ultimately whichever route Connah has taken to get his message across, through others’ accounts of Akhlaq, observations, presentation of personal photos and of photos of the artist’s art works, reproductions of paintings and other research, he has been able to present to the reader the full range of Akhlaq’s impressive artistic oeuvre. Akhlaq may have been a conflicted individual, but we are also able to see him as a sophisticated thinker and a dedicated artist of the highest quality. Connah’s work is also a call to action for further work in the domain of Akhlaq studies. Perhaps it beckons yet another biography or the undertaking of serious scholarly work from an art historical point of view. For all these reasons we should be glad this experiment of a book exists.
Reviewed by Zarmina Rafi

One Response to Book Review:The Rest Is Silance