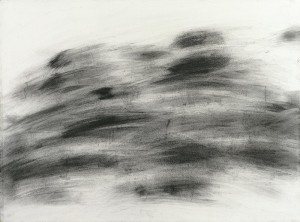 Imran Channa’s work at his solo show at Koel Gallery Karachi is loaded with a thorough process – it comments on the nature of how we interpret history. His work interrogates the overlapping, fading and distorting socio-cultural and historical narratives that traverse many generations, particularly in a skeptical postmodern world. He believes that the structure, shape and purpose of history is to understand the ideological framework of the past. However, its materiality is time and context specific and is open to multiple interpretations, thus intrinsically biased.

Channa’s work is based on and grows from photographs of the 1947 Partition of the subcontinent. This documentation is two-pronged: one is a personal collection of images while the other is an official (more widely disseminated) visual manifestation of  Partition. He combines the two in one chronicle and advocates that there is a “certain official ideology” within them. The Muslims, Hindus, Sikhs, Parsis during that contentious socio-political era, would, hence, be represented through personal/official taste. How a frame is selected, what is chosen to be included in it and what is being signified through its various elements might be read very differently by visual literates.

The artist’s work is also an institutional critique on the art of historical documentation and on the value one ascribes to photographs. Walter Benjamin’s Marxist argument says that the art (or an image) that was developed in the past is different from the present time and therefore in a contemporary setting we should develop new ways to make meaning of it. For him, even the most perfect replica of an art work (or for that matter a photograph) lacks “its presence in time and space, its unique existence at the place where it happens to be”. Benjamin analyzes the substantial effects of film and photography on the decline of the originality of the “aura” and also the autonomous aesthetic experience. He elaborates that with mechanical reproduction explicitly manifesting itself in film and photography, thousands of images of the original are disseminated, all of which lack the authentic power of the prime source. This paves way for less aristocracy and more democracy. Channa, through his visual diction, further questions the legitimacy of the abundantly documented images. The ‘real’ photograph therefore could be obscure, pretentious and misleading even before Photoshop was introduced. The artist’s or photographer’s take is inherently subjective; the interpretation of a visual might only be superficial and incapable.

Photography may be considered to be one of the most reliable objects of evidence from the past, so how can a photograph lie? Channa questions its authenticity and advocates that our histories are predisposed. The documents and visual evidences reach us through a convoluted transformation and recurrent process of erasing, fabrication and re-fabrication. Oral histories trickle down through generations – folklore, myths and fables dwell both in the verbal and the visual.

Channa approaches this investigative discourse in three ways of making; Error, Memory Series and Eraser on Paper. In the Error Series, Channa takes references from a set of Partition photographs and intricately recreates them with graphite on paper. With bold gestural assertion, he further renders the drawings by partially erasing them in patches, while leaving suggestions of the ‘original’ work. The earlier representational drawings transform into abstract linear scoring – dabs of graphite gently and sparsely dissipate into white spaces.

The Memory Series interweaves Channa’s personal archives of images with the ‘official’ photographs of Partition. This time the process of erasure starts while the drawings are in process, metaphorically hinting towards the interplay of knowledge, information, and power. Channa is “interested in how historical facts become distorted, how this distortion can dominate narratives, how fabricated narratives can override collective memory, and how collective memory shapes social consciousness.” The graphite marks here, in contrast to the Error Series, are erased and reworked repeatedly to evolve as dark, lustrous, brushy moments intersecting each other through grids and spaces. They seem frozen in time, leaving bleak traces of their preceding sources.

Eraser on Paper series embody images that once were – fading into uncertainty and illusion. Channa chooses to almost completely erase his drawings that illustrate accounts of families travelling and relocating within the sub-continent. The ‘erasure’ and the erased become one. The image relives its obscurity. It is noteworthy how the eraser is serving, simultaneously, as a medium, a work title and a concept.

For Channa, this body of work “is time consuming, requiring detailed editing and precision. My aim is to create an image that alludes to something familiar but is never accurate enough to be recognizable. Provoking uncertainty and throwing constructed history into doubts, these drawings invite the viewer to consider alternative realities grounded in the familiar. Spotlighting the vulnerability in one’s own perspective, this new body of work questions if we ever truly know what we think we know or have been led to believe.”

The artist subtly and superfluously challenges the indexical image and reflects on it being an empty or deceptive signifier. While tapping into nihilism, with his unique set of aesthetics and individualized language, he gives voice to the moot fundamentals of our contextualized existence. The works seems recursive and reflexive. One can easily situate herself in Channa’s abstract pictorial frames. The empirical names, dates, facts and figures become part of fictional history, yet, they do not go beyond ambiguity – they are situated in the experiential, they remain reluctantly real. There is an integrity and sincerity to the ‘truth’ being told, in an effort to preserve it. The quest for veracity continues.