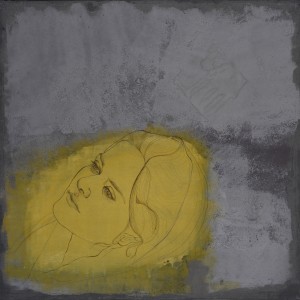 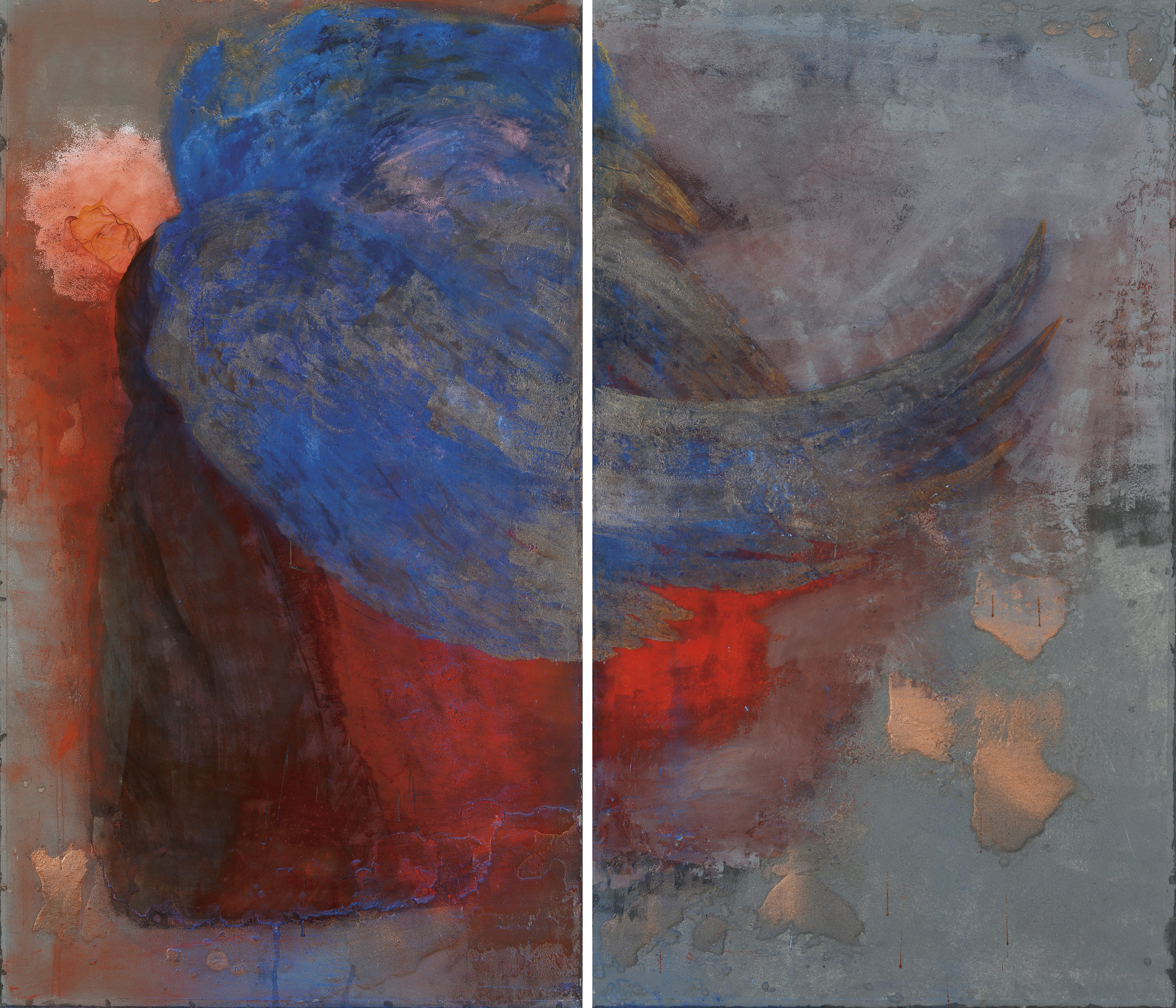 Ek Raaz, A Secret: What Does Kazi’s Work Unveil?

I walk with a mind equally curious and intrigued into Sanat for the solo show Ek Raaz (A Secret) by Sana Kazi that opened on April 25th, 2017. The title of the show, though simple, probes many a question in my excited mind, and so do the titles of each of the paintings: Qalb-e-Nazr (Eyes of the heart), Khwaab ka Rang (Color of the dream), Sub Khudi Hai (All in you), Ghoom (Wanderslust), Muntaqil (Transference), Adab (Respect), Hukm Mai (At your command), Her Waqt (Always), Her Dum (Forever), and Zaahir Bhi (Apparent) .

‘What is Kazi’s work going to reveal?’ I wonder as I begin my little tour of Kazi’s show, entirely unaware of how it will provoke me to take a little tour of myself in the end.

I notice a lot of grey in the backgrounds of Kazi’s work; the kind of grey that is earthy, raw, with bouts and splashes of strong, bright yellows, reds, purples, blues, and greens bursting out of it. Amidst the chaotic yet, strangely soothing, color splashes emerge figures— some obvious and clear, others irregular and somewhat deformed, and some a mix of both; all, however, detailed in a certain way that makes me want to stay, look deeper and more carefully. Some with their eyes closed and some with open eyes, the pensive figures all seem to be in a state of contemplation, as if deeply reflecting on something. A closer look at Kazi’s statement helps me see that it is self-reflection they are indulged in.

They are a series of ten paintings in total, four of which open like a book. This installation is, perhaps, also representative of the way Kazi’s work makes the viewer open up their minds and their eyes for a deeper look inside themselves.

A combination of unorthodox materials such as wood ashes and graphite on wasli, the works are textured like cooled cement in some places, which makes me want to touch and feel them.

The colors used in these works carry particular significance in their depiction, as Kazi believes “Colors say more than words can, or any poetry may…”. Indeed, colors are energy, and the energy of a person or place or thing always enters a room before themselves, introduces itself and makes an impression of its own. “Each soul’s inception has a certain color,” Kazi states, as she leaves it upon the viewer’s own colors to help them interpret the colors of her work.

What is art without interpretation, after all, if not mere aesthetic paired with a certain floating idea? Through the sensations provoked by her work, Kazi wants the viewer to rely on their intuition so it may carry them as far as it can, in an attempt to explore themselves, in an attempt to seek the truth, in an attempt to find and reveal their own higher selves. She likes to see her work as ‘limitless’, led only and solely by The Light— towards the Concealed God [Nietzche] that originates nowhere but inside themselves.

Kazi has taken inspiration from old Mughal books and manuscripts, which would carry prose or poetic verses paired with art to facilitate a more profound understanding of the reader. She has made these paintings large-scale (without compromising on details and intricacy, though, I must mention), in an attempt to shatter the stereotype of miniature paintings having to be small only. This way, she aims to keep the traditional practice and heritage of the subcontinent alive in her own new way while employing the same old techniques, paradakht and tapaei.
As an enthusiastic admirer of Sufism, I feel that the work itself and its themes resonate greatly with the principles of Sufism, not just in the ideas they project, but also in the way they make the viewer look inside them and question themselves in the quest to seek their higher self.

Ek Raaz is the kind of work that encourages self-exploration, self-analysis, and poses important questions that, I admit, can be painful but guided me to places I had almost forgotten about, thanks to the chaotic life we have all lost ourselves in. It guided me back to my sense of Khudi, the secret to myself, the secret to inner light and peace. I feel the following verses by Iqbal are relevant to the subject and, explain in a nutshell, a good part of my understanding of the philosophy behind Ek Raaz: