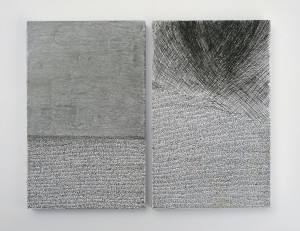 Aisha A. Hussain: A Fine Balance

Forty slabs consisting of hundreds of wasli-like layers of paper bound together — each block the thickness of a book of the same size and format (5 x 8 inches) — are laid horizontally on a white platform (3 x 7 feet) raised two feet above the gallery floor; pages laid to rest…

The slabs are set on a grid pattern — five abreast, eight along.

This arrangement invite viewers to gaze at what look likes a collection of books; their cover missing, to reveal a single page. The first impression that arises from the sight of those carefully staged documents oscillates between memorial and monument. The variety of marks, the color of the paper, the deliberate tearings, staining and collaging suggest different origins; different moments in the life of the author and different states of minds during the writing of the text. The truncated books allude to their missing parts.

Stylistically, the ‘pages’ adopt the style of the ‘new miniature’ (a free form of miniature painting that combines image and text; not to reproduce classic literary Mughal masterpieces or emulate them through ironic pastiches — the line followed by the first wave of new miniature painters), but to convey personal experiences: diary, fictions, auto-fictions?

Here, the fictional dimension is suggested by the incorporation of quotations: passages torn from books, chosen for their thematic relevance, then collaged and overlaid with manuscript notes. Interacting with hand-written texts, these collage elements weave a hybrid graphic space that relays and echoes personal experiences in a fictional diary format.

Across the pages lines of text unwind from left to right, tightly; often without margins, with minimum inter-linear space. Continuous breathing of the text…

The Urdu text is legible and provide topical references and thematic settings — a con-text — for the small cursive writing that unwind illegibly and obsessively; conveying the murmur of the authorial voice — the ‘grain of the voice’? — as it rises at the beginning of Luciano Berio’s Sequenza III, when Cathy Berberian embodies a monologue in which the words soon abandon their meanings to become ‘form’, before reaching a compulsive climax.

This is ‘a fine balance between love and despair’; a suggestive title that invites us to approach this

quarry of texts — some legible, some not — as a visually embedded expression of thoughts, sentiments, traumas and states of minds, spanning across extremes, that are never disclosed namely, but are preserved in the form of the text as secrets; entombed in the text.

The forty manuscript pages laid horizontally evoke a garden or a memorial or a collection of monumental books. They do not set out to convey a story nor to reveal a course of biographical events; but rather, via the medium of language, in the personalized visual form of hand-writing, visually crystallize through form a collection of situations and states of mind. Here, the materiality of the text is the message. The signs of aging on the paper confer upon the ‘books’ the quality of history or archaeology.

Fragments of fictions collaged from published sources turn what could have become a conventional diary into an hybrid, eclectic, coded, ambiguous visual space that preserves intimate thoughts and feelings; more aspiration to sharing convivially a ‘being-in-the-world’ than disclosure of personal secrets.

Thus, throughout the installation — eight drawings respond to the book/s from the surrounding walls — a web of texts and images embodies existential experiences in a visual form that does not merely communicates its content but embodies it. The visual elaboration of the text or body of the text does not provide a mere sub code to relay a pre-existing script, but becomes it; is co-substantial with it.

Thus, for instance, on one page larger inscriptions float over a sea of cursive text, evoking a ‘Un Coup de Dés’; other pages have had portions of their text torn off.

Aggressive manipulations of the form of the book and emphasis on the materiality of the text enshrine meanings; fusing expression and experience.

The viral spread of text, under a wash of grey — a Flood? — and, next to it, a dense mass of lines slashing through a portion of the page; preventing the spread of the text, or intent on erasing it; as

well as every other fragment, confronts us with language in performance; manifesting life and experience through the materiality of the text.

This emphasis placed on the materiality of the text — on the body of the text — instead of treating writing as a mere instrument of communication for a pre-existing script (as traditional miniature did) is why, instead of asking the question ‘What is this work about?’ ‘What does it mean?’, we may ask, instead (here and in other exhibitions), ‘What are we looking at?’; and, in so doing, verify Focillon’s proposition from which we started: ‘signs signify, form signifies itself’.

‘Aisha A. Hussain: A fine balance between love and despair’, was shown at Rohtas Gallery, Lahore in May 2017. Images courtesy the artist.