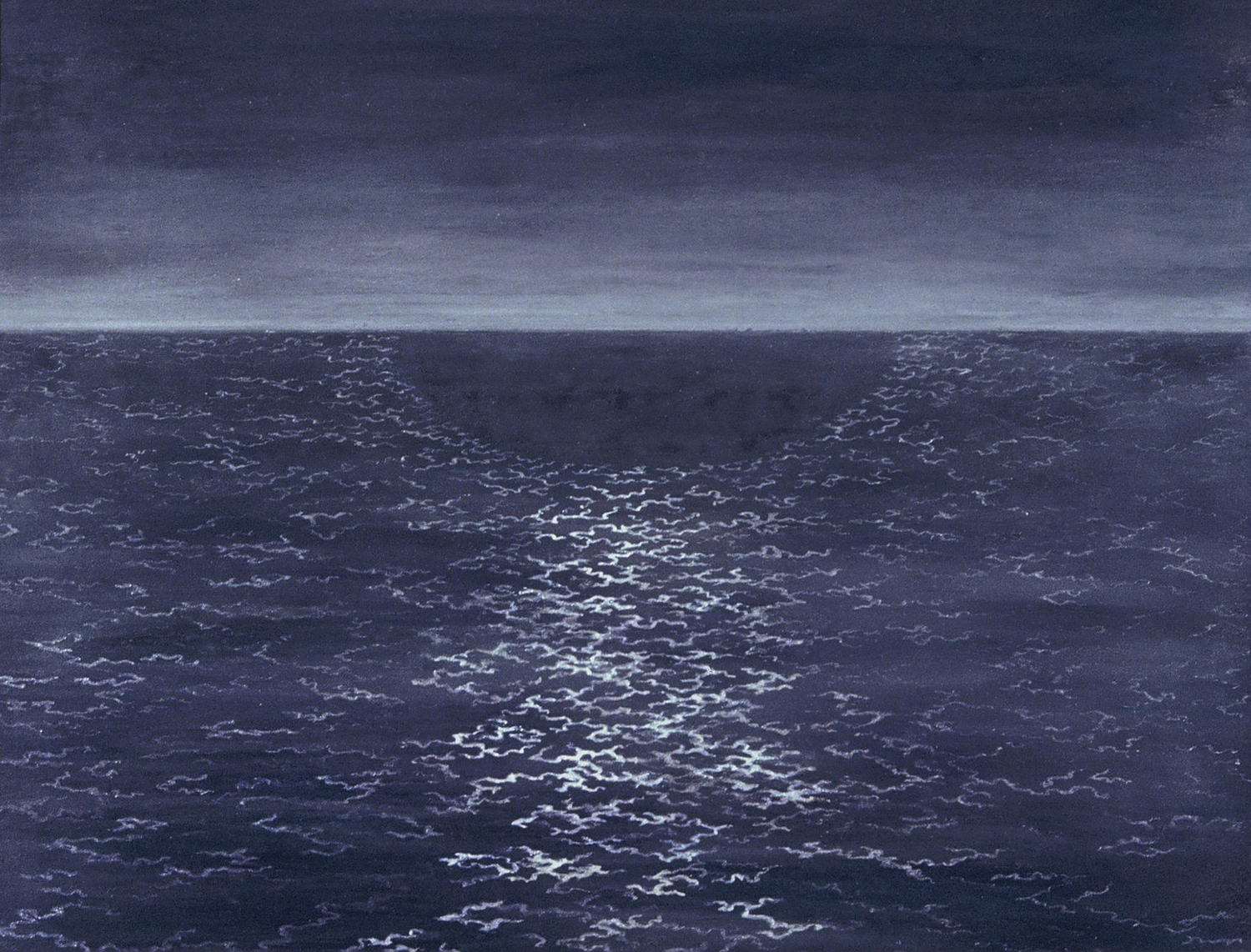 Arthur C. Danto, as he ruminates over the definition of art in “What Art is” talks about the importance of embodied meanings in art and goes on to critique aestheticians and philosophers in the past by saying

To look at a work by the eminent artist, activist and educationist Lala Rukh is to not just to be witness to the “invisible property” Danto refers to but it is to immerse oneself in it. It is the promise of a beauty in nature that has been stripped of the unnecessary appendages that had fascinated and dominated much of the discourse of Western art till the arrival of Modernism but it is also much more. It is to go back to the primordial. Lala Rukh’s images hint at attempts to search for and uncover an indivisible and immutable blueprint that has the potential to transcend meaning and repudiates a demonstration of painterly virtuosity through the creation of illusion. Her images communicate with the viewer on a subliminal level; they are compelling, momentary yet haunting with their spartan ambience. Her art contains a multitude of “embodied meanings” as Danto puts it – the most important one being that the viewer must be moved by the transience of the moment and observe the uncanniness of its simplicity.

So Gadani (2001, silver paint on paper) becomes an impression rendered in staccatos of sparkling dots that resemble distant stars that have been marshaled together in varying linear orders and Sand Drawings 2 ( 2000, Digital print on Hahnemühle photo rag paper ) becomes a quasi visual mapping that explores undulating lines and forms.
This is true even of her photographic series Sagar (2017) for these are not just photographs of the sea- illusions that capture a frozen moment in time- but they capture the contemplative essence of an ordinary person who stops to take stock of his day, empties his mind and then just sits down to look, to see and accept. Little things emerge and form a tapestry of ideas that connect to a larger narrative. The sparkle of water, texture and form, the light of the setting sun, the way the foamy waves curls around the edges with such languid ease are observations that create a space where we can contemplate and let our mind wander as we mull over ideas such as the balance and rhythm of nature or the sea as an embodiment of life itself with its ups and downs. The world is our oyster. Yet it is not. All the images are of uniform size and placed equidistant from each other in a horizontal line so that they resemble a narrative film strip yet with all the flickering, fleeting painterly variations each image contains that would have made the impressionists jealous, they all transcend definition when viewed as a whole.

To understand and appreciate Sagar we have to go back in time to Lala Rukh’s River in an Ocean series executed in 1992-93. Looking at her mixed media works one might think, as Wittgenstein puts it, “The world is the sum total of facts, not things” for we identify and then see the vastness of the sky and the sea but what happens when the artists defy and challenge such connections and definitions? Lala Rukh’s vision, the longer we stand infront of her works, eschews allusions to conventional representational art and touches the transcendent.

The sea and sky, simultaneous in their unity and separation and unlike the tranquility of Sagar become a visual ying and yang. Set against a tonal grey that embodies multiple meanings, the work borders on the sublime as Lala Rukh’s hand brings them to life. With her subtle and meticulously executed waves that resemble the texture of marble in their solidity or bolts of lightning even, with their jagged incongruities, they allude to a kind of primordial power that captures turmoil set against a central circle of calm that doggedly confronts, protects yet unites the elements of air and water.

This search for peace and a struggle, palpable, determined but not excessive perhaps best sums up Lala Rukh’s life and artistic journey.
Lala Rukh completed her BFA in Fine Arts from The University of the Punjab (PU) in 1969 which was followed by an MFA from PU. Under the Pakistan Government Merit Scholarship Program she proceeded to do another MFA from the United States at the University of Chicago in 1976.

She was appointed Lecturer in the Department of Fine Arts at PU in 1978. However owing to the turmoil she witnessed at the institution during Zia ul Haq’s era as well as her own involvement in The Woman’s Action Forum which was devoted to safeguarding the rights of women and protesting against his oppressive policies, Lala Rukh joined National College of Arts in 1982 and remained Assistant Professor at NCA till 1998 when she was promoted to the post of Associate Professor. In 2000 she became the first Director of the MA (Hons.) Visual Art Program at NCA and tirelessly devoted herself to the task of doggedly formulating and forging a vision for the Program as well as teaching there. In 2006 she became the Professor of Fine Arts at NCA and retired in 2008.

In the Eighties she was invited to attend and become part of countless regional workshops that involved working for the emancipation of women; Lalarukh worked with underprivileged women at the grassroots level and taught them to design posters and use the screen printing method. She travelled widely and attended workshops in Sri Lanka, India, Bangladesh, China and Nigeria.

Lala Rukh worked with many mediums combining metallic paints, crayons, ink and acrylic. Her interest in photography and the dark room is also evident in works such as the Sigiriya Series, Mirror Image Series, Sagar series and Sand Drawings. Many of her works referenced the miniature tradition in particular; this was reflected through her interest in developing infinitesimal detail, subtly built variations and in the use and application of minute brushwork on her working surfaces. Lala Rukh was the daughter of Hayat Ahmed Khan, who was also the organizer of the All Pakistan Music Conference so the pervasive influence of the musical traditions of the subcontinent left an indelible mark on her, a fact that is evident in many of her works such as her Hieroglyphics (2008) series where the images are named after various musical notations and have names such qat jhaptal and Qat-keherva jhoomar.

The qat refers to the diagonal stroke of a calligraphic pen used in calligraphy and so language, music and linearity all combine on her surfaces in Hieroglyphics; we are entranced by luminous dots and lines that dance across a vast black expanse and become ciphers of a new visual language that moves to the whim of Lala Rukh’s effortless rendering.

As a teacher and artist she lay great emphasis on a return to and appreciation of traditional art forms. Friend and colleague Saba Samee narrated many anecdotes where she pointed out how Lala Rukh’s art and personality were not two separate things.
“Lala Rukh would say what is the use of a window if you cover it with curtains? Use chich, the local organic kanaan curtains if you want to block the sun in summers!”
On 7th July 2017 Lala Rukh passed away peacefully in her sleep. Her loss is immeasurable and so is her contribution. May her soul rest in peace.