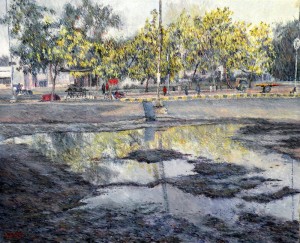 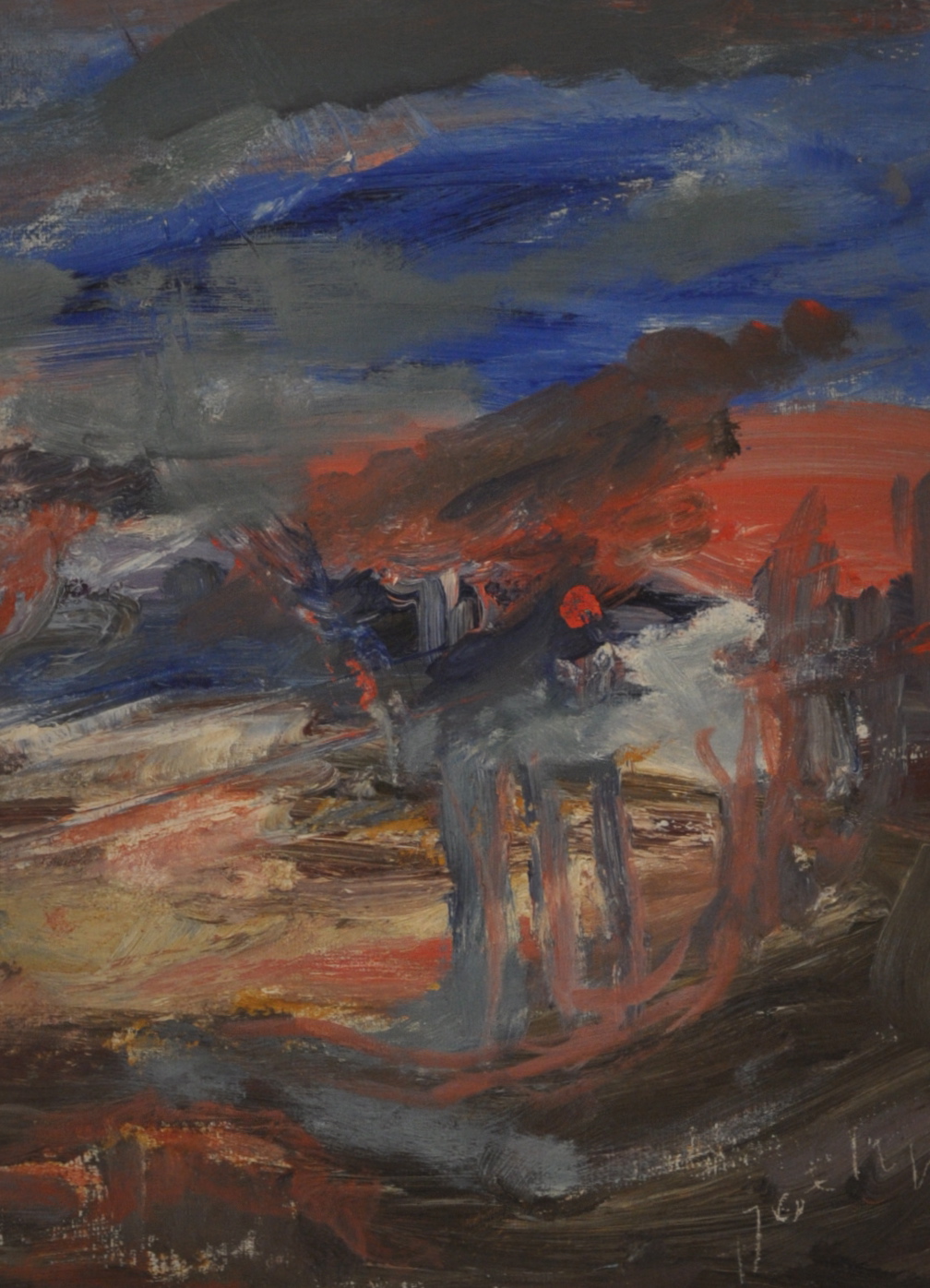 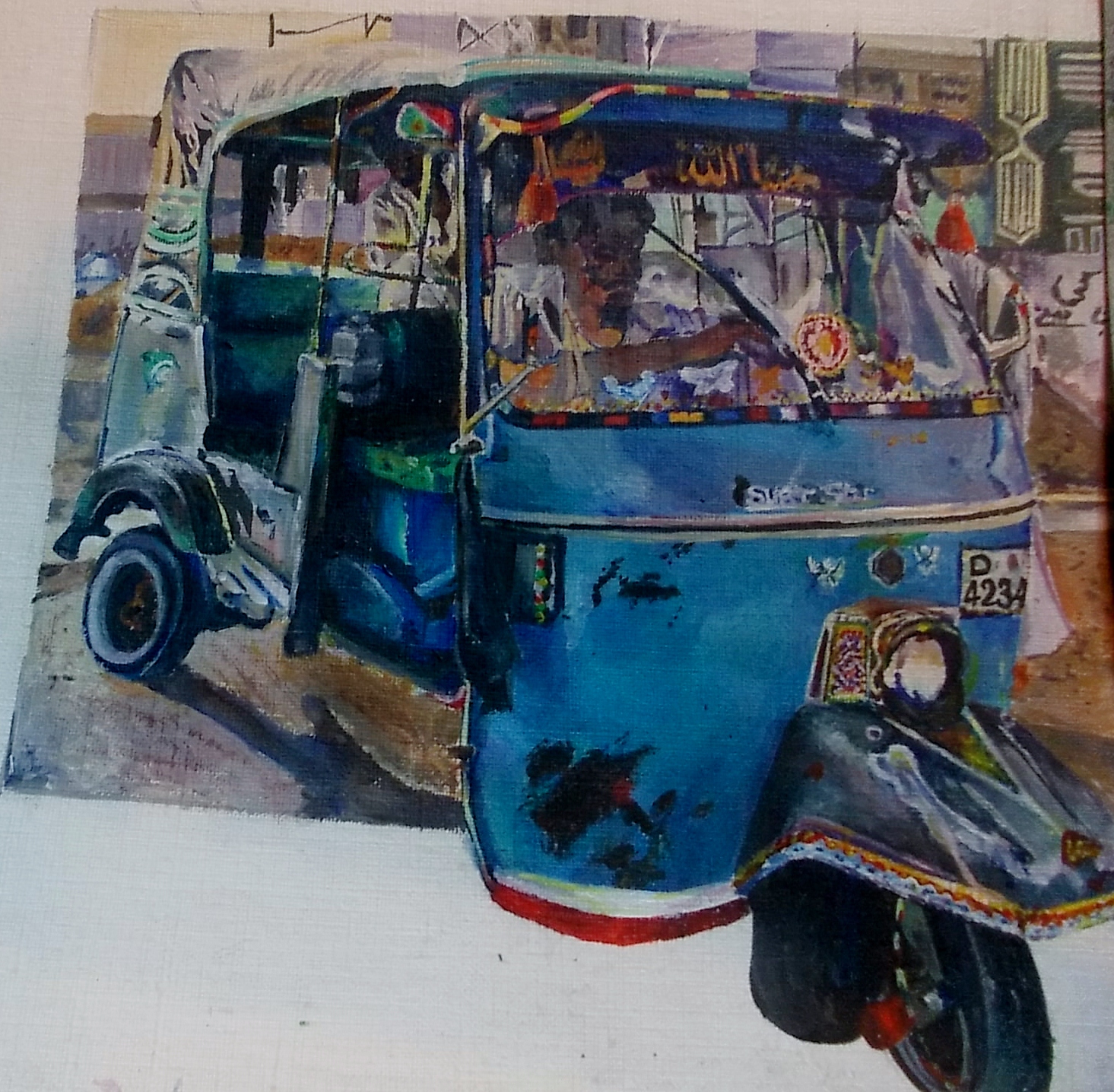 by by Lavinia Filippi

Bend in the Scapes” at Satrang Gallery in Islamabad presents metropolitan, bucolic and ‘mental’ landscapes by seven Pakistani and one Swedish artist. All the art works exhibited are recent, having been done between 2009 and 2012, except the ones from Ivan Joern (b. 1902, Karlstad) that date back to the 1950s or 1960s.

The works of the Swedish painter were brought to Islamabad by the Swedish Ambassador Lars-Hjalmar Wide, who officially opened the show together with Asma Rashid Khan, Director of the gallery.

In the opening statement the Ambassador explained that Ivan Joern was a tormented and deeply troubled soul, frustrated because he thought that the public never really understood his approach to art, although he exhibited in many prestigious locations. The artist became a friend of the Ambassador’s father, who was his doctor, and that is how he acquired his works. “The colors in his paintings depicting landscapes from Northern Sweden and the area around his home town may seem extremely strange, but this is actually what they look like at sunset and sunrise, especially in the early autumn Northern light.”

The other artists of the show tend to be more visual, in the sense that they look at the outward light of nature and its infinity of mutation, rather than the deep and sometimes dark inner side of the human being. This can be seen in the sunset on the river Ravi painted by Mughees Riaz; such peace and serenity can probably only be found in a completely natural and rural setting. The clearness and the power of the blazing light creates a link between this Punjabi panorama and the valleys of Umbria depicted by Perugino in the 15th century.

Ali Abbas’s watercolors too have something of the Old Masters, but in his case it is not for the technique used but for the subjects chosen. Abbas’s Thar Desert characters are magical beings that stand out, thanks to a skilled use of colors on a grey, soft light background. In their iconography, the female figures holding their babies are reminiscent of Madonna and Child.

Hanif Shahzad’s theme is more contemporary: he represents Karachi today with his fast and incisive Impressionist brushstrokes. In the nocturnal scene the light coming from streetlamps depicts the atmosphere of a big, numb town. In the daytime landscapes the artist pays tribute to the everyday life of the urban district. He depicts the sky in Pointillist multicolored spots.

The Macchiaioli can be felt in the rural views of Raja Najam-ul-Hassan, Ajab Khan, and in the outlook of Abid Khan. Najam-ul-Hassan portrays Pakistani winter countryside, putting blooming fields of yellow mustard flowers in the foreground, while Ajab Khan includes some agricultural scenes with farmers working in uncontaminated fields. In Abid Khan’s paintings the presence of humankind is evident. Even if there is nobody represented, the viewer can see human intervention in the form of paved roads, vehicles in the background, utility poles and artificial lighting.

Mishaal Rinch is the youngest artist of the show. Her loud acrylic colors talk about Pakistani culture and its contradictions, describing both traditional scenarios and daily street events.
“Bend in the Scapes” is a fascinating journey through traditional and contemporary Pakistani landscapes, showcasing the many time-honoured customs that coexist with ongoing changes.

“Bend in the Scapes” runs from 28 November 2012 to 8 January 2013 at Satrang Art Gallery, The Serena Hotel, Islamabad.
For more information contact: satranggallery@gmail.com.