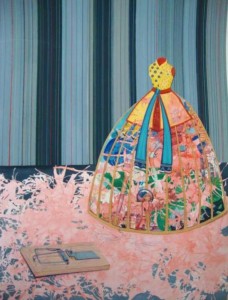 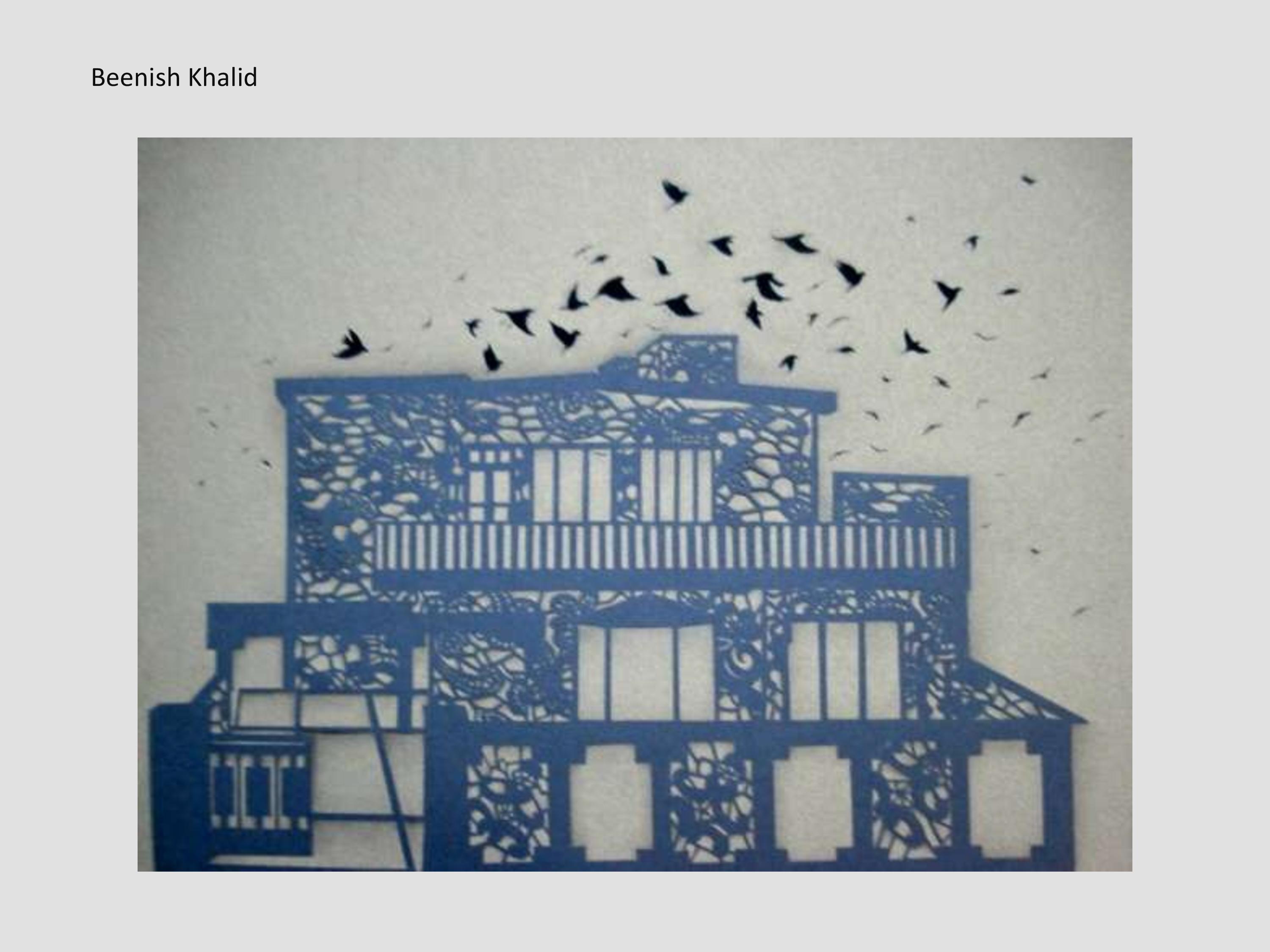 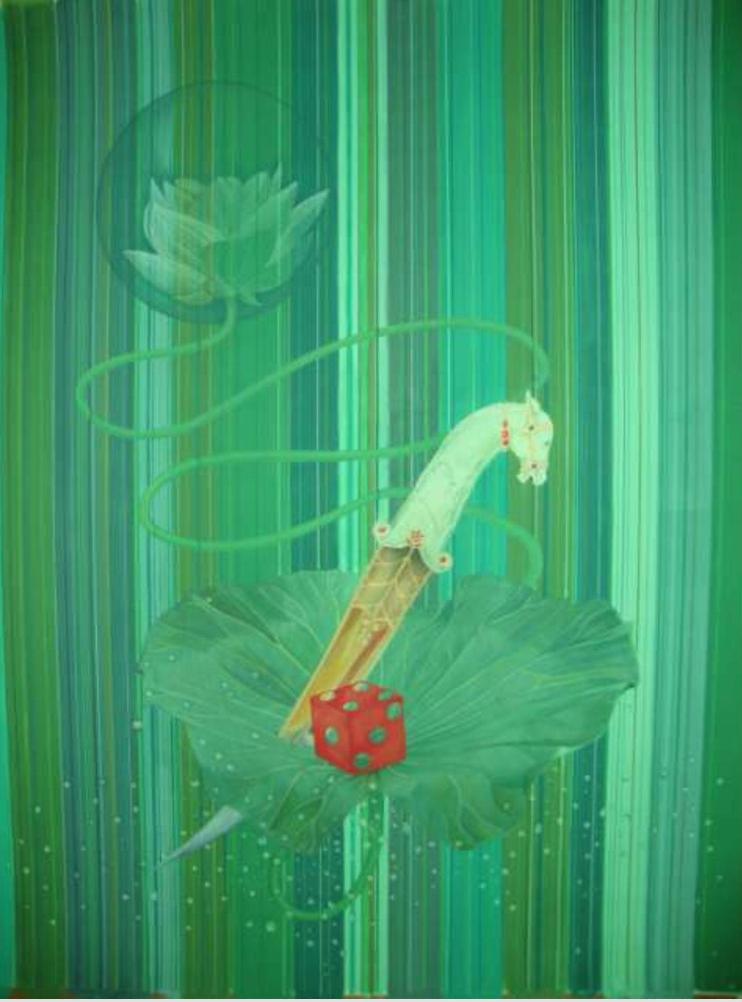 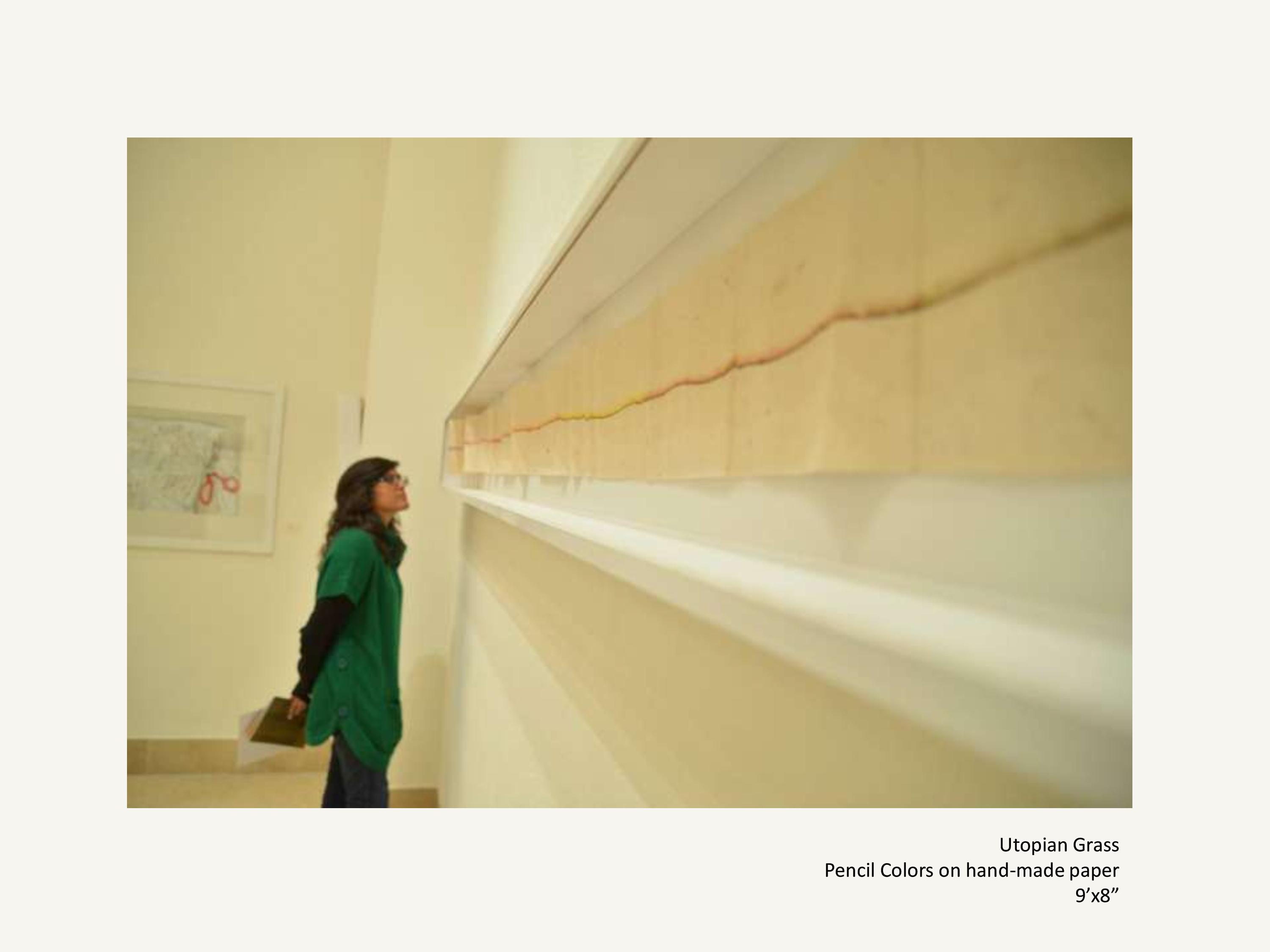 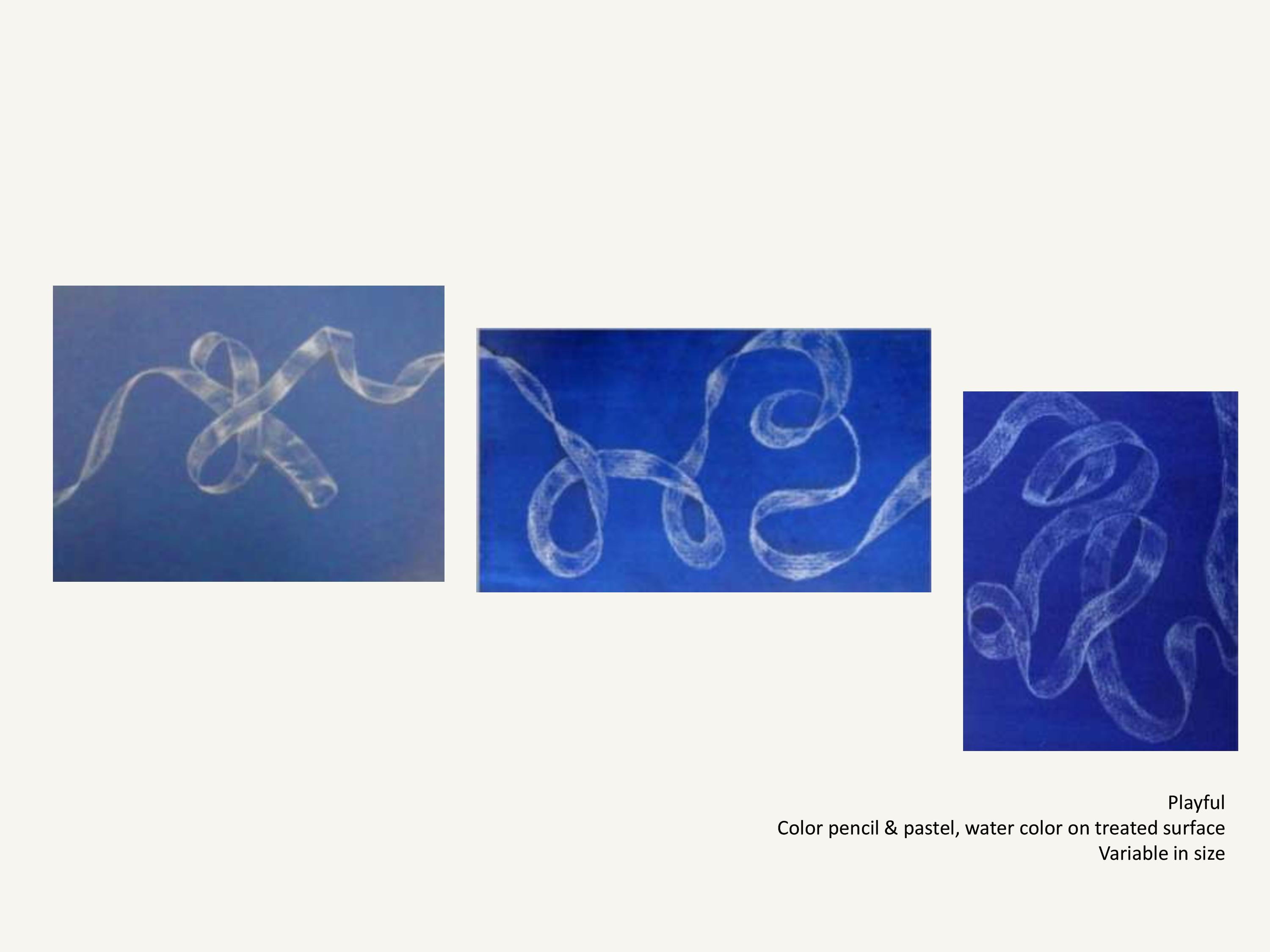 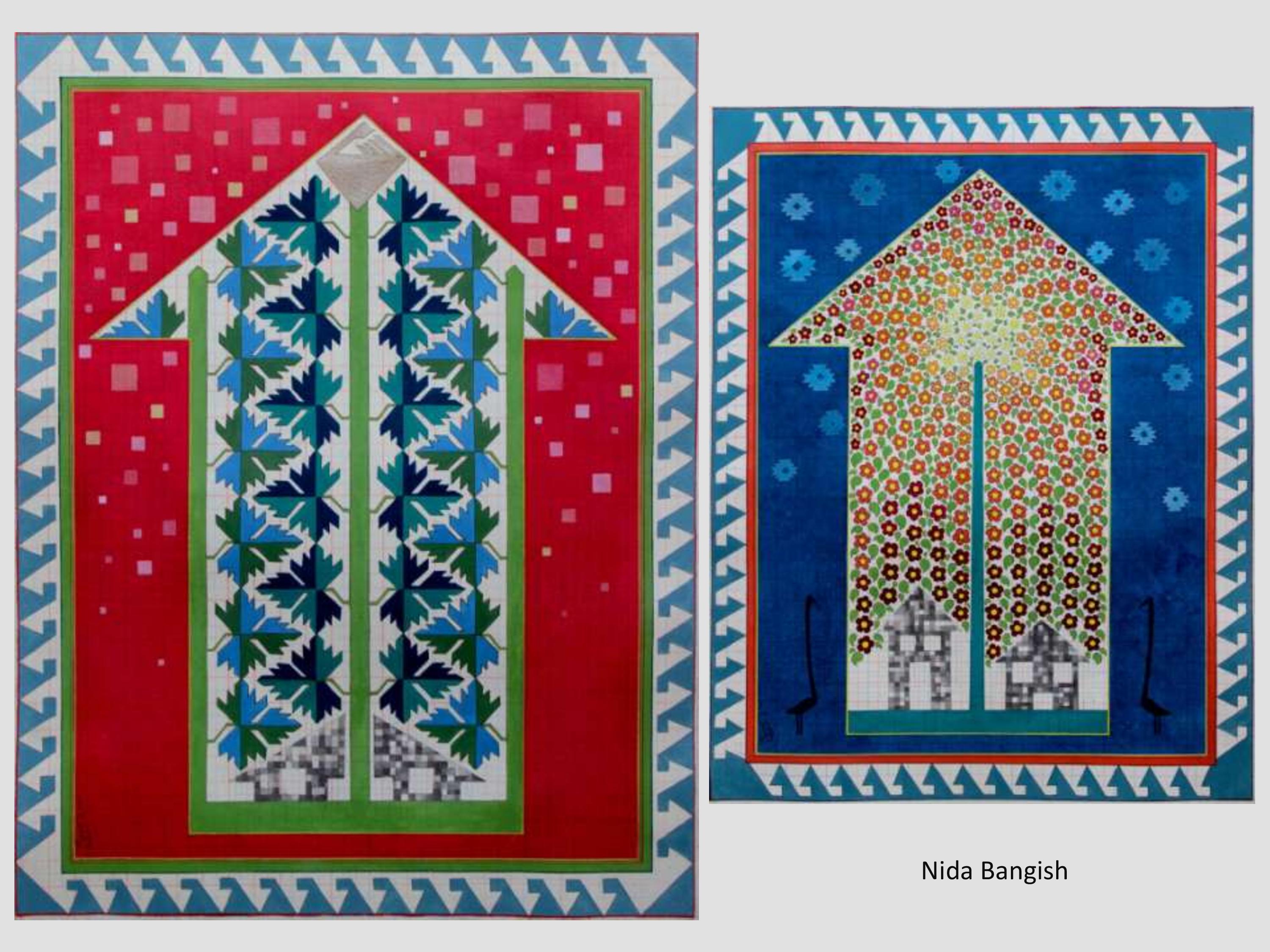 It is most interesting to see an artist develop and mature in an intimate space and share the rare friendship that comes with any art school experience.

These same art educators displayed their work at Satrang gallery in a themed show by the name of “Suspended in Patterns.”

Patterns-designs composed of repeated motifs- shape most of us. Sacred Geometry suggests ideas as integral to nature as they are to art. In the works exhibited we are confronted with socio political ideas revealed through subtle symbols referent to the loosely constructed theme.

Where the Pattern and Decoration movement of the seventies; rejected modern and contemporary art’s austere aesthetics and used extensive ornamentation, we find a happy merger of both schools of thought here in the works of these six art educators/artists.

Nadia displays her thorough understanding of materials and techniques which she practices with her student’s every day.  She presents to us three works titled “Rife I,” Rife II” and “Rife III” respectively. “Rife I was particularly intriguing in its multi-layered symbolism. On a viridian green background, we see the play of the liner in various tints and shades of green interspersed with the two primary composites it is created from. An inspiration the artist says came from the coded bars found on most consumer items. It requires immense control to create what is called ‘hashia’ in miniature tradition and the liner is always a tricky tool. But here, it is flawlessly and extensively used to divide the space and create an axis towards the actual subject matter, a lonely lotus flower floating above from a wayward stem while its leaf drowns below. The seed pod, leaf and flower of the Lotus has a similar signature, their pattern is to transform from deep within to high in the air, then bend downward again returning to the depths of the water in which they grow.  A mighty majestic white stallion embraces the helm of a rather ominous dagger piercing the very heart of the lotus flower, heavily decorated with horse armor of the Mughal Dynasty, along which lays a single red die with contrasting green pips on its surface. The dice is a clever symbol with its literal translation being “something which is given or played” and rests in the middle of the leaf resting with the dagger. As a narrative this piece emerges from history, we are constantly being played or playing games, when we share the same history yet choose to ignore our rich past in the face of contemporary concerns. She manages to marry both her concerns in holy matrimony.

While on the topic of marriage, Ms. Mehrbano Khattak’s work comes in with its delicate renderings and questions relating to marriage as a social structure. The artist says that it is a pattern which is planned from when we are born. In one particular assemblage, titled “Patron” we come upon two boxes with glass lids lined with royal blue velvet upon which white satin silk ribbon bows, perch themselves in linear orders as if marching, armed and ready to face the new marriage. From this we are moved towards “Playful” fragile renderings of a ribbon on the same blue background, raveling and unraveling, twisting and coercing in a series of five small paintings. But the most intriguing of Mehrbano’s work must be the 5 yards of paper “The Utopian Grass” which curls inwards towards the end of its toothed multicolored line printed on handmade paper. Two faceless women in “Meander” and the fact that women have no identity except that which they share with their spouse are delicately drawn on transparent paper suggesting that women have no meaning without marriage, a family, a home.

Houses and homes are the milieu upon which Beenish Khalid draws her inspiration from. In her series of miniature paintings we find seven varying sizes of a home front with an ominous glow above their rooftops. Crows fly in all directions but seem to be suspended over the intricately paper cut homes referring to the social pattern found in most families, strife and angst are depicted in what otherwise seems to be a flowery cover-up for the more sinister going-on within a home’s structure.

The facade of the home is used extensively in Nida Bangash’s work which is aptly titled “The Tree of Life I &II” from her body of work War Rugs with Love, in which she has used patterns borrowed from her Iranian heritage as if piecing her past with her present. Bright colors and geometric motifs add interest to an otherwise simple structure of a house and the Kaftan. Identifying with the social and cultural patterns of her upbringing and the newly discovered freedom to wander in the global culture she is just ascertaining her footing upon, is evident. The repetition of the motifs is as if a silent mantra is being voiced in the artists head and transferred to paper.

Repetition is found in Mamoona Riaz’s work in which she has used a paper model of a house placed in a blank cut away grid of city plans. She has discussed the pattern of living and the diffident invasion of spaces by others and us. She says this is a pattern which is constantly affecting her and that the common housefly (a permanent feature of her work) is preserved to depict the noise and pollution that comes with more and more spaces being invaded every day, the adage “fly on the wall” confronts us in her miniature representations of her precise compositions of grids and urban plans. The factory of life’s patterns is her major concern here.

In order to succeed, one must pass through varied stages of progress. Progress and its ensuing pattern are immortalized through the use of the chair in its many forms from initial struggle to the coveted throne by Saima Beenish. While the symbols are quite literal, it is her exquisite treatment of each stages detail which draws the viewer in. There is a reference to the social constructs of Pakistan in particular and the artists own personal ambitions are highlighted within the work.

In entirety, the show was much appreciated by art enthusiasts, and offered a fresh perception of the miniature tradition offered by these artists and leave us with a want to see more.

The writer is an assistant professor at the National College of Arts.