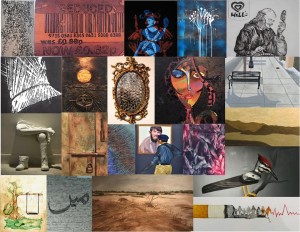 The excitement of these emerging artists could be seen in their thesis work. Students chose different mediums including installations and paintings to portray their opinions and notions. Alishba Khan Rajpoot explored the beauty of uneven surfaces and enhanced the light and colors of these surfaces by using spray and acrylic paint on canvas.  Ammara Mazari showed her concern over social injustices. Using oil paint, she painted the face of a robber whose robbery video went viral on social media because of him making funny faces at the camera. In one of her paintings, she painted the robber’s face with his tongue stuck out at the camera as if he is mocking the system. The robber died during interrogation in Rahim Yar Khan.

Bilal Sethi’s work titled ‘Mitti Pao’ had a variety of sculptures that depicted the lies of the society and how the truth is veiled. He used fiber glass as a media to make the sculptures. In one of his sculptures he made a dead body which was covered with a thick sheet made of fiber that was a strong portrayal of social injustices and how smoothly everything is brushed under the carpet.

Tufail Ahmed Mirbahar used bright hues in his miniature paintings to approach the medium differently. He boldly chose contemporary subjects to paint and each of his miniature painting had detailing and depth.  Joti Kumari’s work stood out as she personally assembled dust from her home town. To work with such medium is challenging and keeping the medium adhered to the paper is also difficult.  High degree finish and balance of colors made the landscapes look like an oil painting. However, on a closer examination one would be able to observe the process and get stunned by the artist’s technique.

After opening a grand thesis display at Art Kaam Gallery, Junaid Hamid brought the other thesis show to his other art gallery, Art One 62. The students of Karachi University displayed an array of thesis work that depicted these young artists’ thoughts, ideas and how they observe the world.

Aiman Taha Khan shared her observance of polythene bags at the beaches. She painted oceans with various colors of plastic bags.

The on-going campaigns of killing stray dogs in Pakistan does not seem fair to Areeba Nadeem. She raised question over killings of stray dogs and painted dogs as beautiful animals and enhance the other characteristics of this animal; love, loyalty and innocence.

The thesis work touched many social issues and students’ personal inspections. In different mediums one could observe a range of subjects visually discussed, questioned and shared by the students.

Fahad Iqtidar created a narrative of those people who committed suicide due to social injustices and have been a victim of sexual assault. He used different pen and ink techniques in his drawings. His work had strong contrasts and depth. The red tones in a few of his works indicated the degree of violence and agony that the victims would have faced. Umaima Mustafa also made pen and ink drawings to depict the strong connection of human with certain things which human now do not appreciate. Incredible monochromatic compositions in her drawings and light and dark shades were done perfectly.

Ruqaia Abdul Aziz made a series of drawings in which she used eraser as her medium. The fairness ads are mind boggling for those who are a victim of discrimination on the basis of skin color. Fair color has always been a symbol of beauty whereas dark people stand nowhere. She has erased the fairness ads and with the residue she has shown the purity and essence of the beauty that is without fairness.

Hareem Jamil shared her experiences of depression that she finds difficult to explain to anybody. Her meaningful sculptures conveyed the message through that how does depression feels like. She created a brain that is infectious to depict how negative the brain starts working when one is depressed. In one of her works titled Medicine Human Remote Control in which the buttons of the remote were shaped like medicines to portray how it aids in healing but still the body and brain is under the control of this remote.

Fizza Batool also shared her experience of Sleep paralysis. In each of her art pieces she tried to aware people about this condition which can’t be verbally explained. She painted tiny small fish in her works as a symbol of fear and terror. In one of her works the tiny fish are circulating instead of blood in her heart. In another piece, she made an alarm clock in which she made eyes with are individually stuck in linemen’s pliers that depicts the agony of the sufferer of sleep paralysis who is aware or awake but unable to move.

By using multilayered techniques Syeda Warda Batool addressed the negativity in human’s life by drawing patterns and lines. These patterns looked complicated and tightly infused in each other whereas on a closer view, they are easy designs. Batool resembled life as simple as these designs which could get complicated with the negative thoughts and bad life experiences that people, sometimes, do not let go.

On other hand, Syeda Sheeza Ali investigated the state and behavior of natural objects and forces. She worked with magnet keeping it in an undefined shape and state. Her experimentation challenged the set notions of art and raised questions about how vast art could be.

Lukshan Rubab recalled the unfair treatment of the society towards women. She made digital print cards that pointed out the issues, taunts and words that are used for women and how it reflects on one’s memory and life. Kainat Saif made shimmery clothes and jewelry and other accessories that is unambiguously related to women. A woman enjoy wearing accessories which brings her happiness and she regains hope and strength.