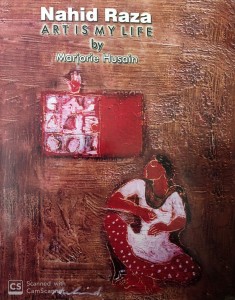 Both Nahid Raza and Marjorie Husain have been part of Pakistani art for many years. These two contributed in several ways to support, promote, and enhance an art world, known today for its diversity and vibrancy. Raza as an artist and Husain in her role of an art critic interacted with their contemporaries and artists of younger generations, hence their importance and respects into a wider circle.

Marjorie Husain wrote a recent monograph Art is My Life on Nahid Raza. The book includes text about the veteran painter, comments on her art by other writers, her photographs, and images of her paintings and drawings. All of which help to understand the development of her art and geography of her aesthetics.

It is essential to know the background of an artist to comprehend her frame of mind, her preference for certain themes, images and technique, her position on political and social issues, and her approach towards life. Marjorie Husain begins the book by providing a background of the artist’s family. “Her Persian ancestors joined the entourage of the Mughal emperor Humayun, when he returned to India in the 16th Century, and settled down in Hyderabad, Deccan. During the reign of the emperor Aurangzeb the family moved to Nagpur and from there Nahid’s father, Syed Yusuf Raza, shifted to Delhi, where he became a well-known journalist, author and art writer”. Husain also mentions Nahid’s two illustrious uncles, S. H. Raza and Ali Imam, the former a major Indian painter and the latter a painter, art teacher, and gallerist, who on Partition, along with the family moved “from Delhi to Lahore, and on to Rawalpindi. It was Imam who held his infant niece Nahid out of the crowded train to give her air while all around them panicked people scrambled on to the train in fear of their lives”.

In Pakistan when the family finally settled in Karachi, Nahid Raza, joined art school and in 1970 obtained Diploma in Fine Art from the Central Institute of Arts and Crafts, located in the Karachi Arts Council (where she, following her uncle Ali Imam, also became the Principal of the Institute, 2003-2008). Nahid Raza, recalls seeing a painting (The Wall) of Murtaza Bashir in an exhibition at the Arts Council during her studies, and reading his words ‘I look around me and I see the wall, I look at my daughter and I see the wall’. Due to this early exposure to physicality of substances, and textures of stone and concrete walls “Nahid paid considerable attention to the surfaces of her work, whether paper, board or canvas. This is an aspect of her oeuvre that continues”.

Because of that sensibility the art of Nahid Raza is distinct and delightful. It deals with the way paint is applied, in layers, resulting in a roughness that reveals a sensuousness and sensitivity which match her chosen theme, the depiction of woman. According to Husain “in the mid-eighties Nahid went to explore the female predicament, taking as examples the women around her”. However not being a painter who flirts with feminism, she reacted strongly to atrocious acts towards women in Pakistan. Nahid Raza was one of the fifteen female artists, who at the National Exhibition held at Alhamra Art Centre Lahore in 1983, signed ‘Women Artists Manifesto’.

And not surprisingly, “Nahid was incensed in 1988 by the outrageous treatment meted out to innocent women by the tribal elders of Nawabpur, who had the women stripped and paraded through the village streets.” She continued to portray the plight of women in Pakistan, where the military government of Zia ul Haq introduced Hudood ordinance and a new law of evidence, basically reducing a woman to ‘half man’. There were protests across the country, denouncing and condemning these draconian decrees. Artists also joined, as Nahid Raza’s exhibition ‘To Speak Without Words’, “was a milestone in the art of Pakistan. No artist before Nahid had so boldly challenged the status of women in a male-dominated society that legitimized the Hudood ordinance”.

Actually, what took place during General Zia’s reign was one segment of a phenomenon that led to religious extremism and militancy. Anticipating the rise of violence in Pakistan and other parts of the world, in 1993 the Goethe Institute Lahore organized a workshop on violence, inviting Nahid Raza and several other artists to participate. Speaking of violence, Nahid Raza commented: “It is a global phenomenon and problem confronting each on if us every day. An artist’s sensitivity reacts to this aggression. The extreme feelings pertaining to torture against women in our society is at the heart of the theme of my work”.

But like an artist of genius Nahid Raza has never been contained or content with one content only; she experiments, explores and often incorporates elements from her surroundings. Surroundings which are extended from her home/studio in Karachi to all those places she travelled in the world. Marjorie Husain – in a delightful and insightful prose, provides account, anecdotes and experiences of her exhibitions, workshops and encounter with artists.

In a creative life span spread to many decades, Nahid Raza moved to faraway lands, both in actuality and on her canvases. Two realities which appear different but are the same as confirmed by the painter. “See the depth of the texture and you will see the depth of life”.