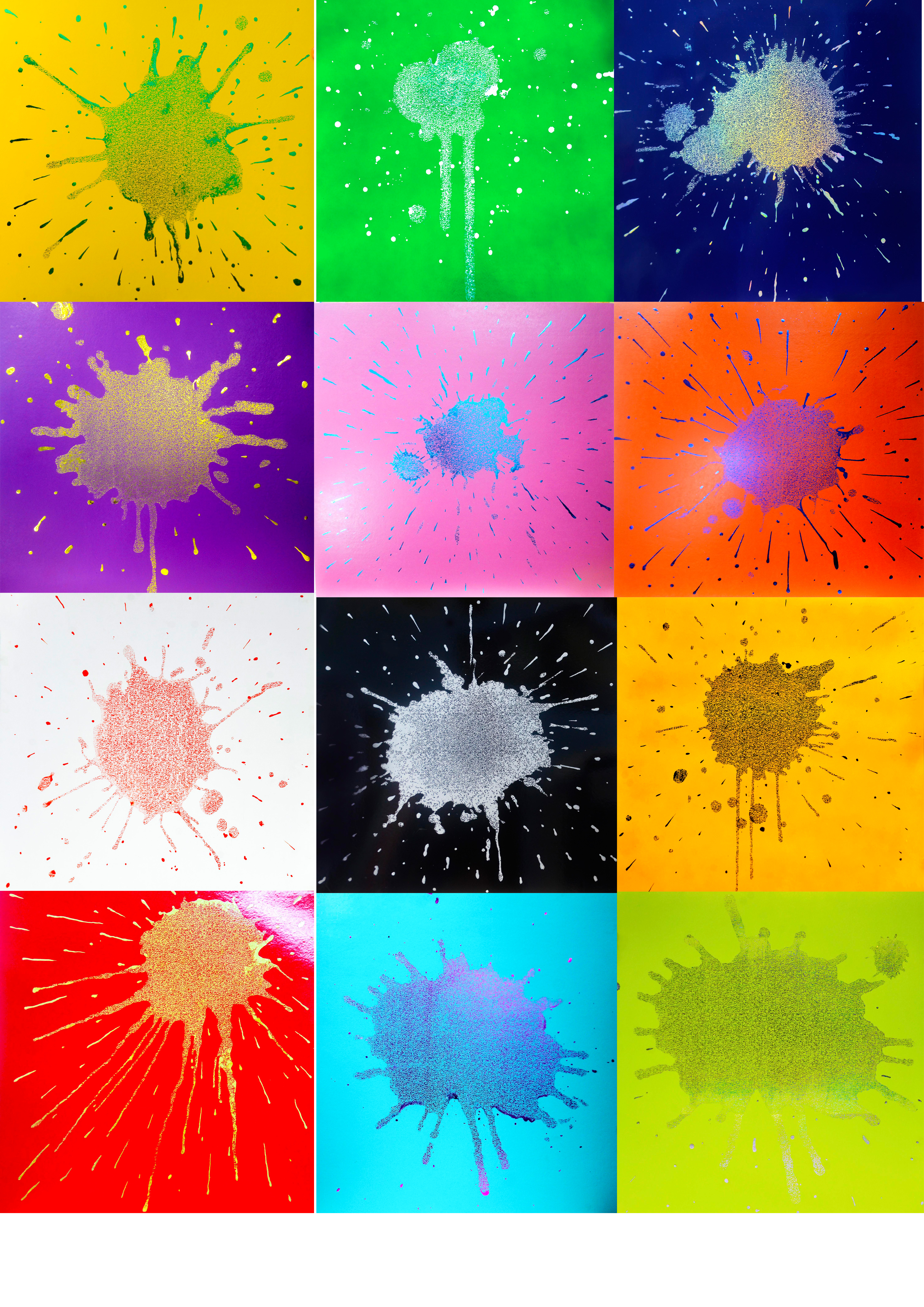 “Adha Musalman” an art exhibition by the eminent Pakistani artist Shiblee Munir opens up a dialectical discourse through significant visuals created by the artist on 12th November 2019. O Art Space gallery showcases the exhibition along with an artist talk on the exhibition theme and artist’s life experiences that unveils an individual struggle and establishment in Pakistani art scenarios. The artworks are unique in executional manners like concepts, style, menageries, medium and technique.

The invitation card of the exhibition is self-explanatory; it presents the photograph of half-naked artist watching up with a placard and the words “Fikri Numaeish Khud Kalami” imprinted on is providing a comprehensible statement. The gesture discloses the theme of the show. There appears a connotation of dialogue and accountability of faith of artist being a Muslim in front of God. He explained during a discussion, “I am critiquing himself. I understand that all the illness of faith is in me and all the hypocrisy and miss conducting with religion are my deeds which may have been developed due to affinity with social, economic and political benefits”.

Nevertheless, he thinks that if any other individual relates his or her similar connotations with these concepts; may feel the connection with the representational expressions. The title is a fragment that exposes the contrasting duality of behaviors and manners of Muslim society. “The title is inspired by the statement of famous poet Mirza Assad Ullah Khan Ghalib. During an accountability in front of British authorities against an offence of being drunk, he mentions his identity as ‘Adha Muslaman”, explained by the artist.

The artist narrates the current situations and dilemmas of the distorted Islamic culture of our society by ourselves through title and the situation of Ghalib has been used as a simile, where folks are like Ghalib as Adha Musalman and they are facing their accountability in front of God Almighty. The artist uses different metaphors that relates and discloses variant dimensions of individual experiences and observations from his surroundings. He used the image of water drop, water dripping, water splashes on colorful backgrounds and faces, honey bee, half peeled banana, a composition of large circle surrounded by small squares, the compositions of written texts on colorful and sheen surfaces. The imagery engages viewers and compels to have a reciprocal understanding of thoughts executed by the artist.

Few of his substantial works display water drop, dripping and splashes and honey bee. Honey bee is a unique metaphor that reveals an inimitable thought of the artist. He relates one of his observation that in our society of Muslims, people are using the institute of faith by distorting and applying duplicitous manners for their own benefit. On interviewing him, he described the metaphor of honey bee, he says “while going somewhere, I noticed a statement that displayed on a shop was mentioning the quality of honey as ‘Islami Shehed’; it triggered my mind towards the understanding the selfish manner adopted by us as Muslim. It compelled me to conclude that we are using the faith of blind followers of Islam for our benefit”. Similarly, he uses half peeled banana as a symbol unveiling another behavior of self-centered society that wants to enjoy the delicious part of edible and throws the peel on roads as unwanted ruthlessly. It further explains the less acceptance of society for deeds, behaviors and people as a combination of good and bad altogether completely. We want to have good but reject the thing that is not according to us.

The other works divulge his pensiveness for great history and traditions of Muslims. He uses text as metaphor of glory and traditional writing of calligraphic texts.  He uses to write in gold and silver on different colorful sheen backgrounds. One of tryptic painting series entitles “History of Islam”; it presents a composition of text and an image of a ‘Sar Warq’ half torn title page on which the word ‘Tarekh -e Islam’ is written. On many other pieces of similar execution display effaced words and texts. On other side, seeing from closer distance, the text seems an abstract rhythm or a subconscious influence on mind. Some other textual images of Arabic scripts written in black color on paper are torn and gathered on a surface indicate the dithering traditions of traditional Islamic arts and skills.

Shiblee Munir is a contemporary visual artist who belongs to the last generation of the family of traditional miniature painting called ‘Patyala Traditional Court Painters’ from the state of India. Shiblee Munir carried on his legacy of preserving the atelier of calligraphy and miniature painting that belonged to the royal courts of Patyala initiated by the paternal grandfather Ustad Allah Ditta of his maternal grandfather Haji Umer Shareef on the order of Mharaja Bhopinder Singh.

While artist talk, Shiblee Munir shares his family background and his journey of learning and transformation as traditionalist to contemporary artist. According to their traditions, the family traditions are transferred to younger generations and it is considered the responsibility of younger generation to maintain these traditions. Those traditions comprise of all perspectives of character building that starts from developing the ethics of offering salutation to elders, obedient gestures and manners, dressing and other ways of life and the traditional trainers were the females of the family.

Accordingly, his maternal grandfather Haji Umer Shareef Mughal miniature painter was brought up and trained by his mother as single parent and sent to Dehli for training of miniature art and Illumination ornamentation. He learnt ornamentation and writing traditional scripts altogether. He also got the basic training of miniature painting from preparing traditional paper ‘Wasli’, color making to using Qalam for drawing and coloring of ornamentation and other practices from his maternal grandmother Razia Baigam and his mother Kiran Munir. Later on, he carried out his formal trainings from professional teachers. He was introduced to Urdu literature and classical writers like Ghalib by his father.

Mr. Munir concludes 19th century as a dark period due to decline of royal patronage for his family when the royal Mughal system was about to end that caused deterioration of traditional arts of miniature painting and ornamentation. After decline period, shifting to Pakistan, Haji Umer Shareef joined master calligrapher Ustad Taj ud Din Zarein Raqam and ornamented the boarders around his calligraphies for his survival. After accomplishments, he was bestowed with Pride of Performance and many other honors and called “Musawar- e Pakistan”.

Munir’s learning did not end up to traditional arts and he joined commercial artist of Cinema media. He started learning calligraphy scripts Nastaleeque and Naskh from Ustad Zahid Hassan; who was a renowned name of Cinema Billboard painting from Neelibar Chowk Karishannagar Lahore. On his wish of further learning of other calligraphic scripts like Kufic, Tulth and Deewani, Ustad Zahid Hassan advised him to join Ustad Ghulam Rasool who was a master of Kufic script on tombstones. Later on, from Ustad Shoukat Minhas, he learnt Shakista and Naskh script. He revealed that he is master of ‘Haft Qalam’: an expert of writing 7 scripts.

Ustad Younus a big name of Cinema Billboard painting, he learnt figurative model and portrait painting on larger scales from him, Ustad Babar, Ustad Ajmal and Ustad Saeed at “Al Toos Studio” at Royal Park; where he served as commercial painter in the morning for survival and in evening he learnt to have conventional training of Cinema billboard painting on 70 feet larger scales. He mentioned many other names of big masters from Royal Park as his teachers.

After this training and evolution of master as market skills, his next level of learning started as a student of academic arts. He entered into Naqsh School of Arts, where he was criticized and labeled as diploma holder artist or a craftsman. At that time, he was successful to the extent that his work was reserved as Museum Collections; nevertheless, he understood the importance of academia and he took admission at Beaconhouse University Lahore in 2007 and won the rolls of honor as distinction. He categorized his artwork done at BNU as ‘conceptualistic and minimalistic’ using formalistic approach. During that phase, he got opportunity to stay and produce art at German Residency under title “What Happened to God”. The process and experience of issues and hurdles of Visa gaining due to his identity and orientation as brown Muslim changes his philosophies of arts. During residency, when he was asked about the South Asian Art History rather than Western modern and contemporary philosophies; being a nationalistic, he realized to have knowledge about South Asian Art History, Islamic Art and indigenous elements. He explored socio-political scenarios that were affiliated with art, Muslim identity and color complexion and were imposed and exploited by others. He developed his understanding of identity that had affinity with many perspectives like individuality, national and international identity, religion and faith, socio-political status, commercialism and many other aspects of human being as a brown Muslim. The phase proved a turning point in the modification of his art, when one of German teacher Mr. Frank Motz Taught him to amalgamate his conceptual understanding of identity and orientation with textual skills. From this point, his concept of Adha Musalman emerged and he developed different art pieces using the metaphors mentioned above. Water splashes is the metaphor that is borrowed from iconoclasms and used as a spot or a reproach as a disgrace that are used to thwart the identity and orientation of brown Muslims when an individual face different blamings on his reputation. The other topics reveal the situations of human belief under themes ‘Faith and Nothing’ and ‘Overloaded Faith’. Many of his other artworks unveil similar dilemmas and controversies of identity and orientation.

Currently, Mr. Munir is teaching in the Institute of Art and Design, Lahore College for Women University as a master of miniature and calligraphy. His wife Noureen Shiblee is also an artist and expert of the art of miniature painting. She had been trained by famous traditional miniature painter Ustad Shakeel from Naqsh School of Arts. Both of them are serving to preserve the legacy of art of Patyala School of Miniature Painting that evolved from Mughal School of Miniature painting and teaching the art and skill to his students at Lahore College Women University, Lahore.