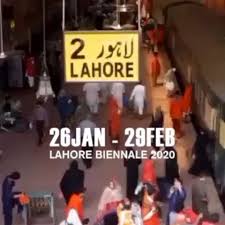 New local models and place-based structures have emerged as a result of four major Biennales in Pakistan; Karachi Biennale (KB17) in 2017, Lahore Biennale (LB01) in 2018, Karachi Biennale (KB19) in 2019 and the most recent, and ongoing, Lahore Biennale (LB02) in 2020. What connects the four is their supreme ability and tendency to activate the city that holds them. The hosting place steers the mood of the initiative and becomes a backdrop or basis of the curatorial ethos. Subsequent activity sensitizes the city and brings almost everything under a spectacle. It enriches debate and complicates questions about the criteria of representation, who and what is worthy of an audience, what constitutes art and culture, what might be the bare essentials to seek attention and solicit critical response, why is institutional patronage or public validation necessary and what might be the responsibilities of a maker, performer or entertainer?

Hosted among the bustle of the largest metropolitan cities of the country, the two Biennales have different flavors to offer due to the socio-cultural and geographic histories of their respective regions. Both cities are industrial, educational and cultural hubs of South Asia. Karachi is the largest and most populous city and is located on the coastline of Sind in southern Pakistan, with a natural harbor and costal marshlands on the Arabian Sea. Lahore, with its rich and deep-rooted economic, literary, architectural, agricultural and political history, has witnessed many stages of physical and ideological adaptation and reconstruction. Therefore both cities are potent urban sites for artistic intervention. They are becoming increasingly transnational, inhabited by migrant communities and settlers with diverse and complex worldviews.

Karachi Biennale (KB) is a flagship project of the Karachi Biennale Trust (KBT) founded in 2016 by a group of visual art professionals and educators to discover, discuss and respond to Karachi through art. For the inaugural Biennale in 2017 (KB17), curated by Amin Gulgee, artists responded to the theme ‘Witness’. It explicitly sought to expand public viewership and successfully established itself as an international art forum that connected the city through improvised exhibition spaces. KB19, held in 2019, and curated by Mohammad Zeeshan focused on environmental development to build “an echo-archive of personal and national memory”. It also intended to respond to the ecological consequences of urbanization, particularly highlighting the loss of low flying birds and the damage caused to their species due to vertical constructions in Karachi. The high-rise concrete structures broke their free flight and subsequently marginalized their life cycles.

The Lahore Biennale Foundation (LBF), founded in 2014, believes in the potential of art as a tool of social engagement and critique. It values the specificity of geographical and social context of a place to understand and develop its various positions through experimentation, exhibition, research, publication, dialogue and cultural exchange related to the arts. The first Lahore Biennale (LB 01) was held in 2018, with Qudsia Rahim as the Director. The international exhibition addressed the dynamics of public engagement in the arts, questioned its parameters and keenly observed Lahore in relation to its regional and global context. Events and activities were held at seven major venues that celebrated the city’s Mughal, colonial and modern layers.

With its open-ended, discursive and investigative projects, we herald the second Lahore Biennale, Between the Sun and the Moon (January 26 – February 29, 2020), hoping that its themes are more locally rooted, activism more impactful, the spaces more inclusive and formats more conversant and widely understood. Curated by Hoor Al Qasimi, Director of the Sharjah Art Foundation, the ongoing LB02 ponders the deteriorating relation between humans and the environment and stirs debate on climate change, the politics of space and decolonization through global and local artistic practices. With a focus on the Global South and shared historical ties with UAE, LB02 also addresses matters of identity, diversity and sovereignty using sites across Lahore, including the monumental 15th century Lahore Fort, Gaddafi Stadium, the Lahore Museum, National College of Arts, and the 19th-century Tollinton Market (now a Museum). This year’s biennale, distinguishably, has global flavor but it also moderately weaves in local creative practices.

The Biennale experience is a stimulating (yet conflicting) matrix of ‘art’ and the city. Some works are a continuum of the artists’ inner dialogue, and not so much a response to the exhibition space or the underlining premise of the Biennale. Some works struggle to cater to local taste or lowbrow aesthetics. Tramping all over the inner walled city of Lahore or downtown heritage sites of Karachi to attend performances and film screenings, the audience transforms the venues into elite community hangouts. Nonetheless, large numbers of people attend all occasions, cruising their way through the illustrious city. Several new experiential spaces emerge – some sites more overwhelming than the art on display, hence dominating the work they adorn.

A few works daringly identify critical urban questions and critique their predatory political economy. They genuinely and meaningfully engage various publics, ruffle the environment and spark controversy. Notably the most evocative and recent being Adeela Suleman’s installation, The Killing Fields of Karachi. The work was sealed, vandalized and forcibly removed by law enforcement agencies. Activists, students and artists protested on social media, staged a die-in and conducted rallies to campaign against censorship and retaliate the silencing of alternate opinions and political voices.

The term Biennale was publicized by the Venice Biennale in 1895, which was also the world’s first such large scale contemporary art exhibition. For the developed countries, exhibitions of this nature are hegemonic. They are a reinforcement and affirmation of the host as the state of power, grandeur, prosperity and refined taste. The agenda, nonetheless, to propagate the arts and crafts, is obvious but it carries with it strong undertones of capitalism, consumerism and control. There has, however, been a proliferation of Biennales all over the world, and an influx of art festivals especially in the presumed peripheries. New art markets are gaining popularity and mainstream cultural institutions are expanding. The Gwangju Biennial, Dhaka Art Summit, Kathmandu Triennale, Kochi-Muziris Biennale, India Art Fair, the Kathmandu International Art Festival and, now, the Karachi Biennale, the Lahore Biennale and the Islamabad Art Fest 2019 (November 18-30, 2019) are influencing stakeholders. So it might be important to understand the relevance and legitimacy of the phenomenon in this part of the world and identify the prospects it offers for our future, especially in relation to the country’s economic well being.

Pakistan has produced numerous internationally acclaimed artists. Their work has brought considerable worldwide recognition and glory to the country. Yet, the regions, suburbs and cities that have nurtured these distinguished artists do not feature as global cultural centers or valid spaces for artistic nourishment. The KB and LB, with their tremendous ability, take on the responsibility (and opportunity) to share with the world, the diverse and parallel realities of its people and places that, for a long time, have not been revealed or remained underground or been misrepresented. The inevitable connection of art practices to history, identity, archives, cultural centers and educational institutions encourages introspection, communication and innovation. Hence creative expression supports tourism, economic development, and creates a soft progressive international media profile for the region.

Inviting sponsors, teaming up, applying for funding and pulling appropriate resources year after year are herculean tasks but with the existing momentum and social ferment, the marathon events are gradually proving their creative mettle and international worth. The Biennale tours are nostalgic. They revive heritage sites and refresh memories of the, once, heavily populated spaces of historical relevance. The artists and organizers revel in their successes, celebrate their visibility and build more artistic muscle. With a multifaceted cultural legacy, the entire experience offers an agnostic space for public interaction through the arts, facilitates the movement of material culture, ideas, and people, and most importantly, cultivates a sense of well being.