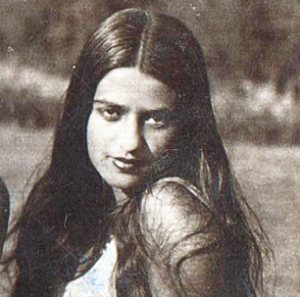 Celebration of any female who has a progressive spirit is always due among the art circles. But things were different a century ago. Linda Nochlin in her 1971 essay ‘Why There are no Great Women Artists’ expounds ‘the fault lies not in our stars, our hormones…..but in our institutions and in our education….understood to include everything that happens to us from the moment we enter this world of meaningful, symbols, signs and signals”. (Higgie, 2017)

Amrita Sher-Gil’s case is a bit unlikely. At an early age her profound ingenuity was acknowledged by The Grand Salon Paris, most influential and male dominant art patronage in the western art circles. She has also been recalled in the writings of eminent writers and journalists like Khashwant Singh and Malcolm Muggeridge whom she was friends too.

In the town of Buda and Pest in 1913, among the historical architecture, Ms Sher Gil was born in a place not so far from the residence of Bela Bartok, a famous Hungarian composer and a pianist. While Bartok was busy creating his world known melodies, that girl was growing up unaware that she would be the forerunner of modern art in the Indian subcontinent.

Shimla, a hill station in India had her family’s permanent home where Amrita stayed at an early. Her parents mother an opera singer and father an early adaptor of camera technology and scholarly interests, were friends with the dignitaries. While living an idyllic aristocratic life style both in Hungary and in India, she developed her taste for creativity. Upon realizing her artistic inclination, her mother took her back to Paris in 1929. Getting trained first at La Grande Chaumiere and then at Ecole des Beaux-Arts, the girl was exposed to Renaissance masters and French painters mostly impressionists leaving a deep impression on her soul and she painted her debut work ‘Young Girls’ only at the age of 19. The work brought her fame and she became the youngest perhaps the first Asian to be an associate at the Grand Salon.

Her paintings of 1929 to 1934 in Paris were truly remarkable for a girl of her age. This period is full of fair skinned red lipped nudes sitting or reclined in an interior. Though they were French impressionists who influenced her style however in some of her self and other panels it is quite clear via body postures and hand gestures that Modigliani was important too.

Return to India brought richness to her style and depth to her thoughts. India was the place nothing like France. The land was occupied by the Britain. Her canvases of that period bear think dark bodies weighed down of fate. The faces with sad sunken eyes transcend a feeling as if amidst of a busy day, those dupatta clad village women have paused to ponder over their lives. Gone are the red lipped fair faces with blonde hair. The fanciful bodies of ‘The Young Girls’ (1932) are replaced by the passive postures of ‘The Three Girls’ (1935). The urbanity of France is conquered by the rurality of India.

Though skilled initially in western tradition Amrita in her second phase of work sheds the traces of that training by kissing good bye to her passion for Italian and French painters except a couple of French impressionists. Exotic nature of Indian art did get her eye too. Various elements from local murals, frescos and miniature traditions helped her develop an unmistakable impress of an authentic style. A visit to Ajanta caves introduced her to the simplicity of form and color. The line drawing of the figures from that period confirms that inspiration she took from Ajanta murals.

She surely was to become the ‘First lady of the modern canvas’ (The Indian Express 1999).

To take a break from Shimla’s colonial tea parties, in late 30’s Amrita decided to spend some time in South India. Three month spend painting mountain folk brought maturity to her style. Boldness that she acquired from her western training then got mixed with the richness of Indian culture diversifying her canvases. The simplified painted forms and structural understanding is quite suggestive of her Ajanta visit. Her figures now wear a much different identity than that of early period.  Carrying a strange sense of calmness the women are adorned with all sorts of jewelry, flowers; patterned fabric, henna hands, nose rings, pierced ears and oiled hair.

Living a hybrid life of eastern and western cultures, in painting female figure she may find alternativeness of self-presentation. (Sundaram, 2002)

Lean figures holding instruments with foreheads bearing tilakas have flowers tucked into their ears. Dark bodies, tilted heads and white eyes continue yet in a much different way, a way of gods and goddesses who are aware of their aura and are at peace with their surroundings. But Amrita experienced a lot of turbulence and emotional trauma during that period while painting her South Indian trilogy as expressed in her letters.

The style has considerably changed yet the feeling remains the same. She designed her compositions with intertwining white dhotis brown bodies and red flat background in the similar fashion as Gauguin does in Jacob Fighting an Angel. Though the critics say she forgot her desire for Gauguin’s style but his impression surely is engraved into her own.

To marry her cousin Victor she flew to Hungary but didn’t stop painting. She clearly conveys the melancholy of missing India through her late 30’s winter snow covered outdoor scenes of Hungary. It was the time of Second World War. The destruction and sadness of power hunger world could have touched her increasing the element of sadness in the work. The flora, fauna, the energy, dynamism and new kind of connectedness which perhaps she missed in Europe brought her back to India once again.

Her introduction to Mughal miniature already fetched the color to her panels however this period sets her as a colorist officially.  ‘I cannot control my appetite for color and I wonder I would ever will’, one of her letters says. Red out of all appears to be the strongest color now starts appearing in her work and with that Amrita blows the modern spirit into Indian art of that time.

Back to her beloved place India surrounded by mud huts, brightly tinted clothed people, brown sand, and the animals like camels and elephants with their colorful howdahs, Amrita once again was revered by the exoticness of oriental life yet in her letters she rejects firmly the ‘cheap emotional appeal’ of clichéd ‘exotic east’. ‘There are such wonderful, such glorious things in India, so many unexploited pictorial possibilities, that it is a pity that so few of us have ever attempted to look for them even (much less interpret them),’ she explained.( Kathryn Hughes, The Telegraph, 2013)

Being in a place she held so dear couldn’t reduce her sense of anguish. In a letter to her friend she writes ‘I am fearfully tired…i am working like one possessed..’. In this agony she arrived at Lahore never knowing this would become her last place to be.

She lived in the period when the first wave of feminism accomplished a lot yet most of the substance on her is written after the latter half of 20th cent. Her letters provide a blunt source to know her. ‘My art, she says ‘is not a career. It is myself and I know myself’. (Christies-2015)

A pre independence painter and a lost daughter of Lahore (Salima Hashmi, LLF 2014), Amrita’s life was divided between Hungary, France, India and Pakistan. She was nurtured in a hybrid culture of east and west and duly transcended both through her work. If west gives her technical expertise it’s the east that injects the real substance into her work. Nearly 160 works of unorthodox and compelling nature were created only in 11 years of artistic life. Be it sensual figure paintings of Parisian period or dupatta clad women of her Indian times Amrita never fails to leave a beguiling impression on her viewer. Hence her role is seminal as she served as a bridge between India and Europe in early 20th century. At the age of 26 the body of work she produced has inspired a whole generation of not only Indian artist but Pakistani too like Naseem Hafiz Qazi, Anna Molka, Shakir Ali.

She is often put twining with a Mexican painter Frida Khalo and was once mentioned as Frida Khalo of India by The Times of India as well. Besides central parting of hair, their atypical thick uni eyebrows and thin hem trimming the upper lips gives them an instant likeness. But there is more similarity than the mere corporeal semblance. History tells us they never met yet these women, who have a face of a goddess and a mind full of emotional ferocity, share a lot in common. Both having a photographer father and an artist mother became avant garde painters. Both grew on popularity with time. Passionate about painting self, having a distinct philosophy towards life and the pain and suffering they went through are other factors that put these bohemian souls on one page.

With heart full of hopes and head filled with dreams Amrita arrives at Lahore along with her husband renting the flat 23 in Ganga Ram Mansion. It is only for four months she could imbibe the flavor of Lahore and the city lost the prospect of hosting a sikh artist of grand caliber. After finalizing the venue, checking up on lights in the gallery and sorting out printed material she flew back to Shimla to pick up 30 something paintings for the second solo show not knowing that everyone else would be attending it except her.

Born in the culturally rich capital of Europe, Amrita died in an artistic hub of British India in 1939 only at the age of 29. Slow poisoning, a secrete abortion, peritonitis or hemorrhage, her death remains dubious till today.

Two weeks after Amrita’s death Literary League Hall of Shahdin Building Lahore hosted that exhibition she worked so exhaustively for.