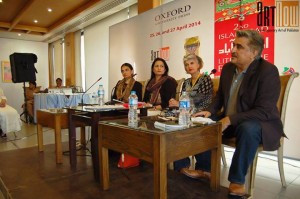 A question I am a little too frequently asked by my students is ‘Does art really have to be talked about?’. I co-teach a course at the National College of Arts, Lahore, titled Fine Arts Seminar. Students trudge into the lecture theatre after eventful days in their various studios (where, I like to think, they labour nobly over works in progress) to gather in the shamanic light of slideshows and discuss art. Academic seminars like this are perhaps the earliest young artists are introduced to this accessory to art-making or, in the light of a growing global trend, this prerequisite – discussion onart.
My students’ questions have made me wonder if art has always been accompanied by oration and debate or if it is a recent symbiosis. Art seminars and conferences usually involve artists and/or art critics and historians presenting and examining areas of contemporary interest in the art world, semiotics, effects of socio-political developments on art, careers of individual artists, or writings and criticism on art. Art critics have been vocal and vehement enough in the past, but not every artist has felt it necessary to be eloquent in addition to being productive. Can you imagine Degas agreeing to a lengthy talk about his fluttering, faerie dancers on a podium? Or Agnes Martin being chatty and media-friendly? Yet there have been some like Whistler too – equipped with the kind of wit and verbosity you would expect of a critic (and is it any surprise that Victorian England’s predominant art critic, Ruskin, was sued for libel by Whistler in 1878?)
Perhaps Whistler foresaw a time when the visual arts would be the stuff of journals, lectures, symposiums, lawsuits, and rebuttals so fierce they would bring virtual traffic to a halt. We are living through that time now. Art and academia are no longer estranged entities and activities prompted by a work of art are as important now as the work itself. What an artist has to say about his work is not peripheral anymore, it is integral to the work. In many ways this is a propitious sign. It demystifies the artist, it makes him accessible and corporeal and maybe less of a Boo Radley figure. It helps translate much from his oeuvre that would otherwise become obscure and end up in the realm of circuitous guesswork and rambling tomes.
The essentiality of an artist talk dawned on me when I attended Shahzia Sikander’s presentation at LUMS in March this year – several weeks after she had addressed an audience mostly made up of artists and art educators at the Lahore Literary Festival, 2014. In the course of a couple of hours, Sikander led economics and politics and finance students through her practice, supporting her sonorous videos and visuals with words and her words with visuals. The session culminated in a response very different from the thoroughly awed and dumbstruck one that had marked her address to the artist community. These listeners and viewers were duly impressed, of course, but they also had questions to ask – questions that encompassed a range of concerns much wider than where the artist chose to make work and why.
Seeing Sikander dialogue with these young people who had come unburdened with artistic knowledge and expectations to hear an artist speak was satisfying. It reinforced my belief that art should be pervasive. If it is informed by shifts in other spheres of human life, then it is only logical that it should wield some sort of power over them. And although lectures on art at literary festivals held this year in Lahore, Karachi and Islamabad drew a large number of art students and artists, there were also journalists, actors, reporters, politicians, publishers, entrepreneurs in the audiences and art was disseminated. For a country that has had its own dark ages, its own Bonfires of the Vanities, this should be lauded as a tremendous accomplishment.
Which brings me to the question – how often should art conferences be held? Academic institutions today conduct art seminars as part of their degree programmes but should seminars and lectures on art be made a regular social occurrence? Galleries could play a key role in bringing this about. Some private galleries and community spaces in Karachi, like V. M. Art Gallery and T2F (The Second Floor), have already set a precedent. In Lahore, Hast-o-Neest (Institute of Traditional Studies and Arts) and Nairang Art Gallery host discussions on arts and culture and theirs is an example that could be taken up by other galleries in an attempt to engage more of the populace in artistic discourse.
There have been lectures on art that were so seminal, they were published, translated, and are now widely read and quoted from. Adolf Loos’ essay Ornament and Crime, for example, was a lecture delivered by the Austrian architect in Vienna, on January 21st, 1910. Talking about art can be revolutionising, and especially now when the experience can be visually and aurally recorded and shared on social networking sites, shared as podcasts etc. But the experience also brings with it the possibility of the artist or art critic becoming too much of a performer or an ‘eloquent dandy’ immersed in ‘dandified artistic punditry’, as Jonathan Jones put it in a hugely relevant article titled Hold that tweet! Artists should stick to the day job (The Guardian, May, 2012). So perhaps it should always be seen to, first, that the art being discussed merits a discussion.
Dua Abbas Rizvi is a visual artist and writer based in Lahore, Pakistan.