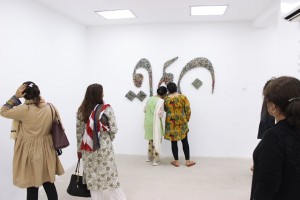 And those who were seen dancing…

An art exhibition, titled “and those who were seen dancing were thought to be insane by those who could not hear the music”, opened at Sanat gallery. The show featured Asif Ahmed and Syed Faraz Ali’s artworks which undertake a political stance and display a variety of work ranging from the British Raj in the 90’s to the rule of current politicians of Pakistan.

By using light washes of watercolour and tea stains with meticulous graphite drawings, Ahmed recreates historical photographs of the subcontinent to express the grief and sorrow endured in difficult times under British leadership.

The same idea of sufferance is further developed by Syed Faraz Ali in his work. He uses mixed media to mock the political situation of Pakistan by replacing the faces of leaders with animals like monkeys and rats, and placing the word qanoon (translation – law) upside down.

This exhibition opened on September 3rd 2019.