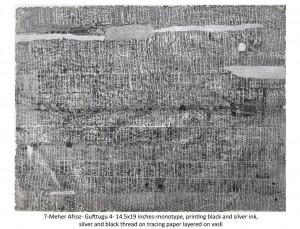 On Wednesday 8th April 2015 Full Circle Gallery opened its doors to a stimulating exhibition on narratives, curiosity, and failures in the face of persuasion, to say the least. ‘Alternative Methods’ features works by seven experienced masters and talented emerging artists; it is a treat to be lost in such profound aesthetic and emotion.

We begin with Meher Afroz, an artist who needs no introduction, and her series entitled Gufttugu, meaning conversation. Her character and demeanor has always been one where she has used profound tones to vocalize her conversations. Here she has translated that effort and specific practice to mesmerizing effect, using printmaking techniques with silver and black ink as well as silver and black thread. She has layered the mediums on vasli with exquisite technique and artistry.

The canvas size for both her pieces may be 14.5 by 19 inches, but they exude far more than the borders of their confinement. She has stated that all that we acquire, be it “information, knowledge, wisdom, and logic” in our conversations is met with resistance and failure “when practical challenges are confronted.” Perhaps that in itself is a reflection of what Afroz is trying to achieve with these pieces. Her text serves as an undertow, drawing us in to an enchantment of silver and black before leaving us with individualistic expressions for a strangely conventional day-to-day practice – conversations.

Nurayah Sheikh’s To the other side has taken a self-reflection narrative of, as she states, the “many avatars a woman adorns”. Her sculpture pieces created with brass and etched with ink are a symbol of this and the many roles that neither “define” nor “diminish” a woman. These are represented in the spores of the plant. The spherical “ovum” that catches your eye signifies the “overwhelming strength of self”. In that it encompasses and reaffirms the strength needed. The intricate dragonflies suspended in motion, iconize the “wisdom of transformation and rebirth”, leaving you reveling in this very energetic sculpture piece.

Manizhe Ali, as typical of her, cannot help but capture our imagination in the practices of recreating and preserving memory formed through social and cultural settings. Her digital print pieces, And the doves circled overhead, focus on rituals. Each photograph is experimented through a printing process and the text creates scars the way our memory remembers moments in time no matter how vivid they tend to be. Ali reminds us of the importance of visual experience in constructing narratives, that are then used to create a social context, and strongly urges the viewer to further the story, carry the torch, despite all that may come to suppress.

Amidst such emotional narratives, Rabeya Jalil offers us a more lighthearted approach, through curiosity. So it is little surprise that her small square pieces are titled with such playful names: How to make a and Toiling kittens. Using mono printing and acrylic on board, Jalil’s playful compositions represent a trait prevalent in all of us – curiosity. Such is the vibrancy of curiosity as displayed with her colour palette and the figural expressions that the viewer fails to leave without making, at the least, a brief connection.

Moving onto to Sajjad Ahmed’s piece we see almost a semi-rebirth of renaissance is his execution. Always forever now is a representation of, as Ahmed states, “an event” and its “product of multiplicities amalgamating into [the] present”. Not for one moment are we lost or caught off guard as the installation “narrates through the language of art itself.” The composition creates a trance, mimicking a tapestry thrown over a dream the way curtains drape over a window. The movement and action of his characters and objects serve an unadulterated version of life and all ideas and imaginations that “prevail in the distance between history and the present.” There is always so much more than one translation, rather an amalgamation of polar opposites like “being and nothingness” “reality and imitation” that define an event.

In the end we are left with Mohsin Shafi’s three-pronged spell on the exhibition. With two of his pieces using paper collage and the other archival print on canvas, Shafi’s desire to “exploit the deepest emotions embedded beneath the surface” comes through rather well. Wicky-Wacky World is exactly as the title suggests. A cluster of gums and teeth, tablet sheets, and rustic scissors accompany many of the inhabitants of this piece’s world. Dirt under my nails and Appetite for life employs a similar balance, with random objects bringing a submerged order to chaos. But as carefree as some of these names may be, his art is based on “personal snapshots” from old notebooks and memorabilia that exhibit a more disturbing and traumatic interpretation. As he states “[t]his is my burden, my constant struggle – in hopes to validate the ‘I’”.

If personal opinions are anything to come by, this show exhibits powerful narratives where the artists meet at common ground through struggle and curiosity in their storylines and magnificent executions.

Osama Khalid graduated from Indus Valley with a Bachelor’s in Design and Falmouth University (UK) with a MA in Creative Advertising, in 2011 and 2014 respectively. He has a passion for writing and visual aesthetics, and is currently creating ideas at Lowe Pakistan.