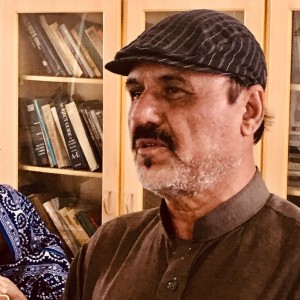 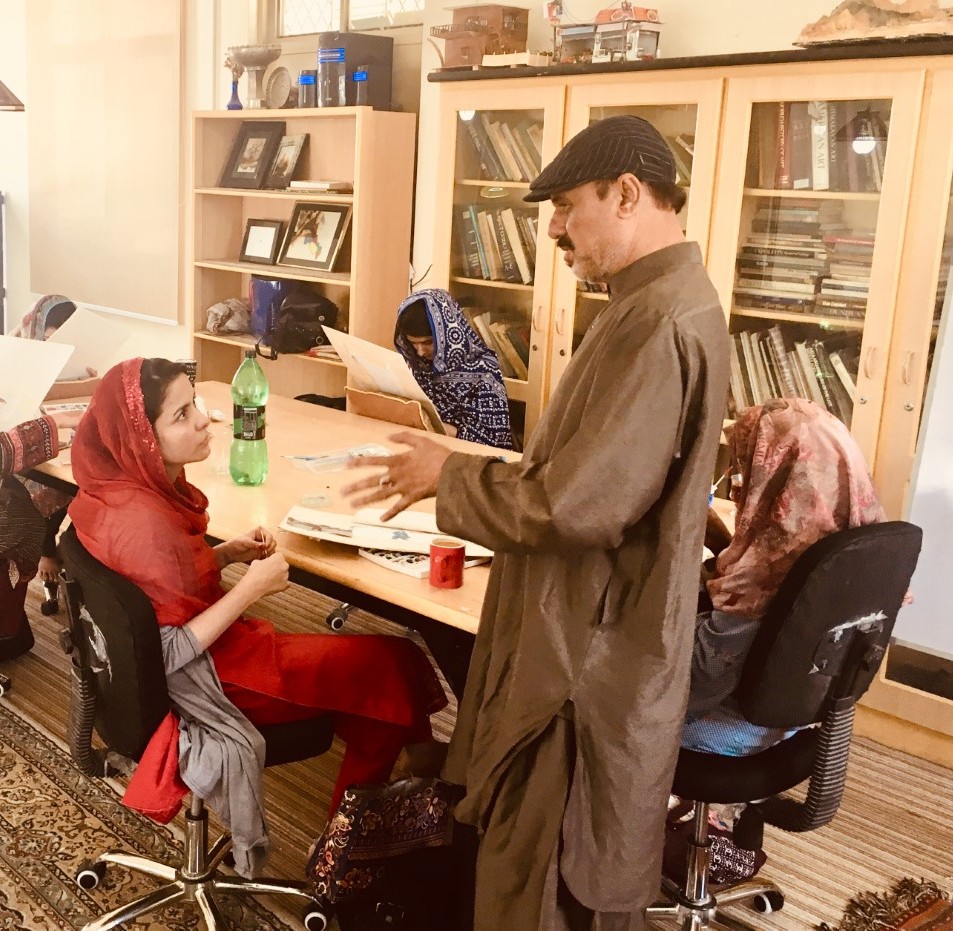 Hailing from Naushki Balochistan, Akram Dost Baloch graduated from National College of Arts, Lahore, and is among the founding faculty of the Department of Fine Arts, University of Balochistan. His aesthetics are inspired by the primordial motifs of embroidery, wood carving, and the craft of weaving from the region. Akram is a prolific artist always eager to reinvent and explore new dimensions in his expression while staying rooted. He has received wide acclaim, both at home and abroad and also received President’s Pride of Performance Award, Pakistan’s highest civilian award for excellence in 2004.

For Akram, it is important to keep the constant internal and individual process evolving as an artist. His source of inspiration has never been Picasso or Shakir Ali and Akram Dost does not shy away from admitting this. His inspiration is the order in the chaos he finds around him. “I by no means underestimate the value of a book or a whiteboard but my creative process is much more organic than to be dependent on tools or mediums. Growing up I saw indigenous aesthetics all around me. When I was in school I used to go and spend time with the artisans from my area and get fascinated by how they dyed the wool, made threads, combined colours, and the folk songs they sang. That fascination has stayed with me ever since.”

Akram is proud of the fact that despite the widespread deprivation in Balochistan, there is no dearth of indigenous wisdom. “Today many may consider this politically incorrect but young girls who have finesse in their embroidery or a better sense of matching colours are considered most eligible for marriage in our rural communities. I see a kind of appreciation for artistic merit in this. Unfortunately, we either prefer to shun or ignore our microcosm and macrocosm heritage. We feel embarrassed of our roots in art, in culture, and in politics. Politics as well as art can drive a society towards sophistication. As far as art is concerned, most of the art that you see coming out of bigger cities and renowned art colleges of the country is very commercial. An artist compromising under the pressure to be commercially successful is a grave loss.” He opines.

For Akram it is not possible to detach himself from the political realities of his surroundings. “They have usurped the resources of our region and displayed large billboards to celebrate CPEC in Islamabad. They are actually afraid of us. If a torn jeans is less unsettling than a tribesman’s moustaches or his pagri than we don’t have to worry. We have nothing to fear from the people who don’t take pride in their own identity. Once Musharraf was visiting France and the French President asked him about updates on the archaeological discoveries of Mehrgarh. President Musharraf had no clue what Mehrgarh was and turned to his military secretary who of course also didn’t have a clue. The French President ended up tutoring Musharraf on the significance of Mehrgarh. Situations like these are very unfortunate.”

“I was recently curating an exhibition of artists from Balochistan in Karachi. I had also arranged for a panel discussion on the side lines. During the discussion, they kept focusing on CPEC but I said my identity is Mehrgarh and not CPEC. CPEC may be China’s economic interest and there is nothing wrong with that; every nation has the right to pursue their economic interests. I cannot recite Faiz’s poetry and focus only on the beauty of his verses. We prefer to look at the obvious explanations. Truth is inconvenient. No one is a fool; no one wants to die or get killed. I belong to the area of Saindak and Riko Dek. While Benazir Bhutto was the Prime Minister and was visiting Balochistan to inaugurate a project in the region, I was requested to set up a commemorative wall. I was desperate for some income at that time and also felt a political affinity with Mohtarma so I agreed. The engineer appointed to liaison with me was a local. The raw material that he brought for me to use in my display was a container of one ton of gold, silver and copper in the shape of newspaper folds. I asked him about the future of these reserves and he had no idea. There is no Sardar or Nawab in that area but there is still no school or hospital for the locals till this date. Those same local people are seeing the convoys of four-wheelers passing in front of their houses day in and day out and the dust settles on their faces. They are bound to wonder where all these vehicles are going.” Akram reflects.

It is these same faces that keep appearing behind thatched textures, weather beaten wooden beams, and rusted jewellery on Akram Dost’s canvases. Layer after layer of perspectives adorn his monochromatic landscapes. “My voice may be weak but you cannot supress my narrative. There were more than 22000 archaeological objects from Mehrgarh in museums in Karachi. I am a member of the Committee on National Heritage and wanted to get at least some of them shifted back to Quetta. I had to be tactful and convinced them that this gesture will look good and the people of Balochistan will appreciate it. I knew that most of those objects are actually adorning the shelves of houses in Islamabad, Karachi, and Lahore. In India displaying the works of M. F. Hussain is considered a status symbol. Same way they like displaying Mehrgarh civilisation in their drawing rooms but take no pride in the identity associated with it.”

Akram is happy to express his political views solely through his canvas. He has no patience for the mafias in politics and art. “We have actually compromised values in pursuit of recognition. Today so called art critics and media actually make artists. Back when I was still in college, I was asked by the same drawing room intellectuals to gather some boys from Balochistan on Labour Day for a rally. I do not question their intentions but they lacked a sense of reality – there were hardly any Baloch students in Lahore. Later, I was back in Naushki for summer break when Afghan war broke out and refugees started pouring in. There was an incidence in which some refugees killed a couple of Baloch boys after a feud. I also took part in the agitation against these refugee settlements in our area. I was arrested and spent almost three months in jail. When I returned to college after my jail yatra, there was a lot of excitement and the same people wanted to project me as a political icon but I refused. I told them I was arrested due to a neighbourhood brawl. I don’t feel the need to fit myself under any label.”

“I would like to think of myself as a teacher and educationist. I am happy when I am referred to as a headmaster by my own people back in my village. This is my reality and this is what my art is all about.” He concludes.