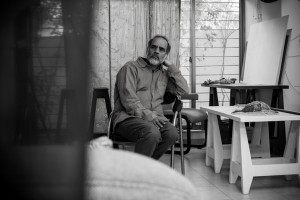 The quest for love is the most crucial in art making. Finding love is more tragic then unrequited love. The fact that something as beautiful as requited love can be as transient as life itself. Hence an artist is not only someone who creates out of pain of unrequited love but the tragic exaltation of fulfillment of love. A creative individual wants to preserve this precious feeling in the fear that it might be transient. A need to preserve this phenomenon becomes an artists need. A quest of not having a quest is a bigger tragedy. Hence finding love is more tragic then unrequited love.  Love opens realms in an artist’s soul which evokes in him paradoxical feelings of vulnerability and resilience. Unrequited love numbs senses and acts like a medication which relaxes but not necessarily heal a bruised soul.

Unlike medicated relaxants love heightens the senses. The sense of touch, smell  etc   putting the artist in a state where his ultimate bliss would lie in a complete annihilation of ones self. It is this victory that humbles the creative soul. Unrequited love only creates art which is trite and mediocre. Picasso created great art because he stood exalted in his love relationship.   Van Gogh created his masterpieces because he was callous and almost arrogant in his love fulfillment. When he cuts his ear and presented it to a prostitute he was in love with.  He was jarring and ugly almost to the point of carelessness in expressing his love to the beloved. An artist is only humble when he is obnoxiously arrogant about his art. It is essential for an artist to be arrogant. There is no such thing as a true artist who is humble.

Afshar Malik is a true artist for the very reason that he has embraced himself completely as a creative soul. His work is uninhabited, spontaneous and byronic. There is a sexual arrogance in his work just like the prototype byronic heroes in old romantic classic literature. Afshar Malik’s work exudes sexual and a spontaneous  intellectual energy with very little concern of the outside or viewers of his work and it is this aspect that makes his art superior. His prints are made with laborious skill and unhurried manner- taking his time on each plate and at his own time and discretion. He is unhurried in his skill and laborious.

Although printmaking is not considered a medium which requires painstaking precision unlike mediums like miniature or sculpture but Afshar etches his plates in the miniature style of great attention to detailing.  He is unhurried and not interested in pleasing the viewer. In fact he wants to baffle and puzzle the viewers by either overcrowding his plates with images with very sophisticated detailing or in paradox to that his plates very minimalistic and the technique is very similar to naive art. This aspect is true in his evolution as an artist His series of plates titled “The river story” are etching plates he had done in 1993-94 . The miniature like detailing in it is superb and spontaneous. The artist maintains “I have tried to depict a birds eye view of multiple objects juxtaposed together. The choice of objects depicted are not contrived but on the other hand very spontaneous. I made 40 of these plates in the time span of one and a half years. These are calligraphic drawings. My focus is line, movement and rhythm.” The composition also deals with abstracted forms which give rise to innuendos. A good art piece is one which has multiple innuendos for the viewer to interpret and re interpret in a drawing.”

His later works are more minimalistic and laden with innuendos. Since the technique has been derived from naive art, there is an element of sarcasm in the way he depicts human anatomy and animals. His paintings titled “Same to Same”, “Jugalbandi and “Deals and Deed” depict men women and other objects in a very abstract expressionist manner. Otto Dix and Max Beckman come to mind when one observes Ashar Malik’s details of the anatomy. The figures look humorous and grotesque at the same time. The technique afshar has used is collograph  made of wires relief.  It seems that Afshar Malik has a very acerbic humor in his art which is consistent to his personality as well. Afshar Malik embraces the aspect the self and drama associated with self in a very open hearted manner and this is evident in his prints. It seems that Afshar is melancholic about his love relations but he is only melancholic enough to rely on it at a very cursory level. And it is this reason why Afshar Malik is indeed a superior artist.