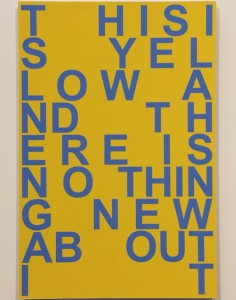 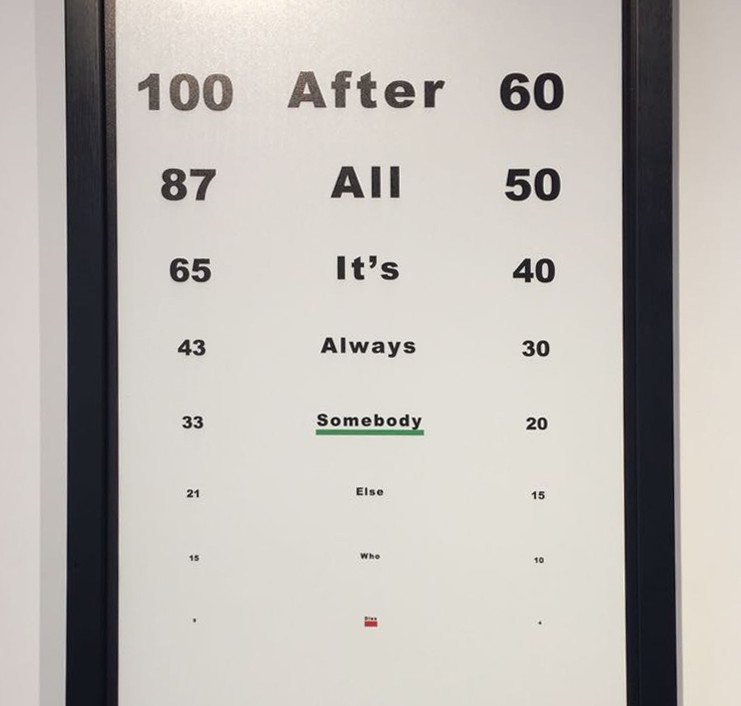 A Picture’s Worth is a Thousand Words

Many, who had wished to see their favorite work or a signature art piece on display by any of these artists, were in fact surprised to see the titles of those works in the form of artworks installed in the gallery. The artists had diligently created a new idea upon the words that they had chosen in the past for their most famous or preferred art pieces. It was indeed a delight to see the creative processes involved in using text as an artform, and it was also indeed a pleasure to see the ease and the simplicity with it. Would it be too wrong to say that, in most cases the new art work, created by majority of the artists in this exhibition using only the titles of their work, ideas and shows, actually surpassed the original artworks in totality?

To begin with, Adeela Suleman’s original Installation in 2010 at the Aicon Gallery, New York titled, “After All it’s always somebody else who dies!” was a large-scale hanging stainless-steel work trailing slightly on the ground from the ceiling, that had a pattern made of birds, which seemed like some dead birds’ memoriam. Her new work based on this, if not surpasses the fragility and the intricacy of the curtain like sculpture, definitely does intensely move the viewer in inexplicable ways. The Acrylic sheet with digital print mounted in the gallery had text and numbers written which seemed like a chart displayed at an eyecare clinic. The numbers indicting a death toll, higher than the last time, and the end line in a barely visible font says, “don’t panic it happens to the best of us,” is a comment or a pun intended on the “near vision acuity,” does hit the very conscious of the viewer especially in context to the recent atrocities, in places like Syria and Burma.

Where Suleman would pose questions on humanity, Ajaz Johkio would have his intellectually thought-provoking queries on art and culture with always challenging the set norms and conventions in his exhibitions. Johkio’s work titled “This was a Painting” was first displayed in The National College of the Arts, Degree Show. Ground-breaking as it was at that time, it had not lost its vitality and significance even now. This work was first made as a landscape painting and then later developed into a cut out of words and letters, having multiple narratives on various ideas on art, artists, galleries and its pre-requisites. It In fact, remains one of the most gripping representations and interpretation of “in the beginning there was a word,” exhibition.

Just like any given work of art has multiple meanings, words also have various connotations and contexts. Ehsan ul Haq’s “1 is older than 2,” artwork in this exhibition is a derivation from his first solo show in Belgium last year, titled “1 is older than 2: logics of a futile action.” In this exhibition, Haq, creates two sculptures of lions in concrete and writes the title of the work in charcoal on the wall. Haq has been previously depicting various animals in his work, here the choice of a lion, again points towards his investigation on co-existence, control and survival amongst all living beings in reference to the inanimate as well. Similar is Iqra Tanveer and her “The forgetting Curve,” installation that was first seen in Amsterdam last year. Here she replicates the idea with a beautiful picture of mountains luminated by a cathode light inscribing “The forgetting Curve,” which seems like a commentary on the oblivious and the oblivion.

Forgetting the cheaper yet greater joys of life, and how much can be bought of those, are the one-rupee coins installations by Muhammad Zeeshan, last year at the Sanat Gallery, Karachi, titled “Art Cash, Hard Cash,” commemorating Mohammad Ali Jinnah’s 139th birthday. In this show, he creates a video installation, titled “Lame Video,” and has “Art Cash, Hard Cash” flashing in green over a Bollywood song titled, “Money.”

Then there were more artists such as Ayesha Zulfiqar, Madiha Leghari, Mahbub Shah, and Mahbub Johkio who displayed works using text as an image. Zulfiqar, painting in bright yellow and stating “This is yellow and the there is nothing new about it,” titled “Untitled, Leghari, explaining the concept of “The describable describability of taking a breath,” through a map, Shah, inscribing text on a mirror explaining the meaning of his work titled, “Bhao,” and Mahbub Johkio, creating a diptych of photo transfer and emulsion on canvas with one painting mounted on the front of wall and the other at the back of it, with words written, “The image is shifted to the backside of this wall.”

Similar to this exhibition was another show curated by Quddus Mirza titled “Here and Now” in 2013. Three of the artists “in the beginning was the word,” were part of that exhibition as well. One of them was Nausheen Saeed, and I can still not forget her phenomenal fiber glass sculptures installed at the Lahore Art Gallery. In this exhibit Saeed, creates a mesmerizing video installation titled, “Where is Here.” These words in colour blue appear and disappear smoothly almost hypnotizingly on a green background screen of an LCD, which in its mere execution seems to be in a transitory mode, drifting in space, time and light, some of the key elements in Saeed’s art practice.

This exhibition challenged set patterns, and the artists brilliantly altered and re-structured many various mindsets. This is in turn becomes now a long discourse on the validity of art and its infrastructure at large in Pakistan.