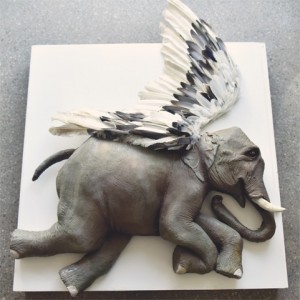 Seeing and being seen

The artists belonged to the same college but each artist had a different subject. The art show was comprised of paintings, new media works and sculptures. These four artists skillfully manipulated the medium to convey their message through their work.

Unorthodox and revolutionary, each of the four artists displayed the best of their work to capture viewer’s heed. The work that caught everyone’s attention was a flying elephant made up of silicon and fiberglass by Arsalan Farooqi.

The sculpture is made in a flying position which is the depiction of power. The artist believes that the whole universe and the creatures living in it are connected with each other and one’s beings consciousness recognizes other’s existence.

He said: “The consciousness is inextricable part of reality that nothing really happens in the physical world unless a conscious mind observes it”.

With the fusion of digital technology and historical miniature images, Farooqi didn’t only make his work striking but he also educated viewers through the moving images and led them understand the images.

Where sculpture of a flying elephant mesmerized the viewers, on the other hand, the video animation and video projection were highly intense for the art lovers that depicted power and addressed beingness.

Another artist, Ahsan Javaid, questioned the immediate understandings and ideas we all make up in our minds by getting different informations, which is sometimes self-created and sometimes transferred.

With most of his art pieces comprised of fabric in Arcylic box, Javaid put the viewer in a visual test which gradually became a mind teaser as soon as the viewer tried to unlock the mystery and tried to understand it with the perfect angle.

Javaid concluded that whatever we see and assume is the only information we try to get and put in the frame of our minds and make our own understanding. He tried to deliver that things can be seen by many aspects, it depends on us that which angle we chooses.

Ehsan Memon displayed his work on different mediums that included oil on canvas and oil on fiber, graphite on paper, charcoal on paper, and mixed media.

Among all his art work that held the viewers spellbound, an art work with charcoal on paper, 20×30 inches, titled “Give up” was highly profound. There were feet hanging in the air above the surface that reflected the feeling of failure, depression and loss of faith and hope in everything.

An oil paint on canvas, “Suff-1”, and oil paint on fiber glass, “Suff-2”, are a deep example of how Memon explored the visual language

Hamid Ali Hanbhi brought life to the images and made the most of the movie’s lyrics in his art work. He is famous for his humorous and unique way of utilizing the movie lyrics and images. The series of graphite work on archival paper, “Divorced”, Hanbhi tried to bring a new meaning to the moving images and local popular lyrics of the movies.

The artist spoke about his work and said that the subject matter in his work ranged from political imagery to love scenes and from violent war images to poetic landscapes of a world yet to be adventured.

All the artists showed versatility in their art work and remarkably questioned the thought process of humans and challenged the understandings. These talented artists went beyond boundaries to show a new dimension of art and medium.