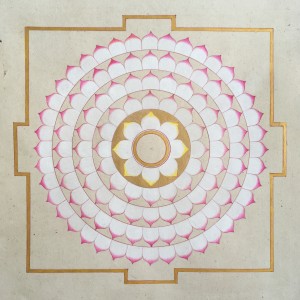 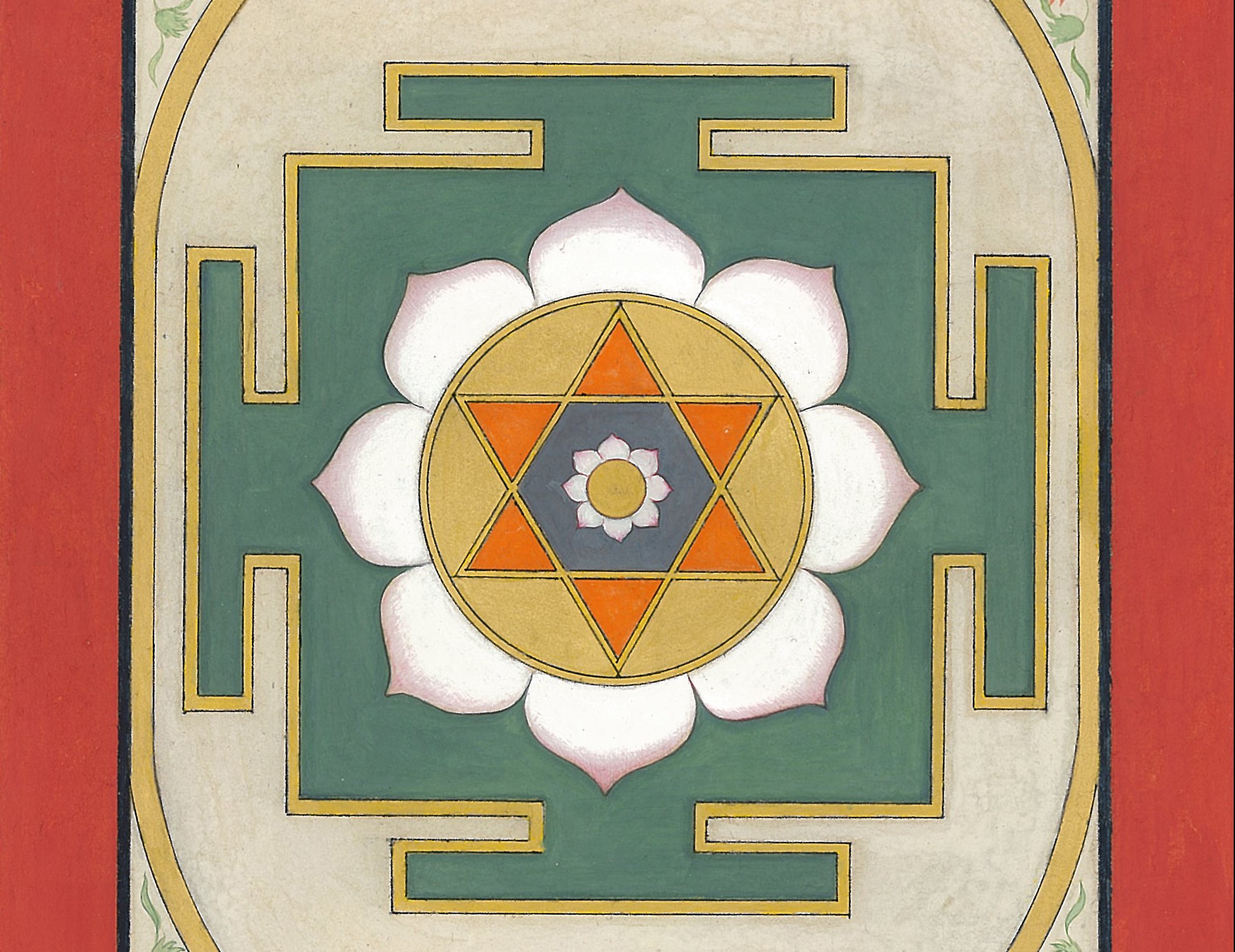 A LABOR OF LOVE

“To view and experience miniature paintings demands a special disposition and talent. One must enter a world enclosed like a glass sphere. Our situation resembles Alice’s in wonderland, who opens a door with a golden key and sees the most beautiful garden” Zbigniew Herbert[1]

One Source Many Forms is Dr. Susana Marin’s solo show presented at Koel Gallery. With three different sets of work focused on the traditional Pahari Miniatures and Sacred Geometry, the artist aims to showcase the variety in the traditional arts of South Asia and their holistic nature.

Entering the world encapsulated in her works, one must immediately notice the artist’s devotion to the centuries old traditional practice of Pahari Miniature painting. The intricacy and immaculate detail of the figures, their expressions, foliage and the landscapes painted with natural pigment in complimenting cool and warm hues prompts towards the labor of love and evoke a spiritual undertone of love depicted in these narrative pieces. Moreover the use of organic mediums developed manually through thorough and laborious process highlights her objective of undertaking this body of work i.e. to preserve and explore ways of revival for a dying form of art. A dilemma, she came across during her search for artists practicing traditional Pahari miniature painting that made her assume the research with more vigor and enthusiasm.

Miniature painting, an art form patronized to produce religious manuscripts or royal portraits went through a significant shift under the patronage of the Rajput rulers in Himachal Pradesh in northern mountainous states of India during 17th century. The new genre, called Pahari Miniatures due to its place of origin, featured local landscapes, cool colours and focused almost entirely on the tales of love of Radha and Krishna. Through a combination of Mughal influence and signature of local artists, it offered a rejuvenated interpretation of the old tales through its use of cool and complimenting vivid colors and intricately detailed mountainous landscapes alongside delicate figures. The imagery comprises representational as well as symbolic imagery from Hindu mythical tales of enduring love symbolizing the quest for spirituality and divine inner peace. Fascinated by these features of visual and symbolic depth, Dr. Susana Marin has explored the genre not just through figurative and symbolic elements executed in traditional style, but the elements of sacred geometry hidden in the traditional South Asian art creating a stimulating new body of work featuring Yantras[2] rendered in Pahari miniature technique.

The endlessly flowing river between the lush green mountains covered with vines and plants of lotus, plumeria and parijata, female figures draped in richly decorated garments waiting under the moon with an expression of longing for their beloved, and the architectural details of Guler[3] within and around the composition in Susana Marin’s work transport the viewer to a fantastical realm of Radha and Krishna’s timeless tale of pure love. Although the imagery reflects a strong bent towards the age old tale, the real intention here is to keep the aesthetic value of this art form intact. Though most pieces are composed in traditional manner, some have explored more minimal and contemporary compositions, highlighting artist’s effort to come up with new imagery while still using the traditional language in order to retain the essence of the art form while creating something new. This combination of old and new elements formulate the first section of the work displayed here in the gallery.

The second section comprises wholly of sacred geometry of Hindu and Mughal eras painted with gold on naturally dyed paper. The geometric symbols and mandalas representing Shakti, the balance of masculine and feminine forces and their interaction, and the play of light through Mughal element of Jali[4] are some of the visuals painted in stark contrast to celebrate the figure and ground of seemingly simple geometric elements.­ The limited color palette enables the personas of the Gods to reflect through their millennia old symbolic representation composed of concentric and radial triangles, circles and squares. Fascinated by the play of light through the grids of Mughal architecture the artist has experimented with the pattern construction on a consistent grid to come up with new imagery.

A combination of the underlying concepts found in the first two sets reflect in the third body of work that explores the relationship of Hindu symbols and elements of Pahari miniature in rather abstract fashion. The square setting of the most of the compositions in this section with strong emphasis on numerological matrix brings the idea of circulation of energy within an entity to the forefront. Placement of symbols associated with Hindu Gods i.e. lotus, trident, and other elements in concentric and orthogonal matrix highlights her exploration of paths and levels of meditative processes in Hindu beliefs. Spirituality, devotion to love and a focus on the center of self remains the main focus of the entire body of work.

Pahari miniatures gained popularity due to the use of cool and warm colours in a whole range of complimentary settings accentuating the balance of various energies symbolized in the compositions. The cool pink lotus, pink-blue sky against vivid green complimented with a range of warm oranges in the garments create a dynamic flow within the composition. The use of natural pigment lend a unique character to these colours that cannot be recreated with synthetic pigments. The process of extraction of pigment takes a lot of time and builds an association between the people involved in the process as well as the art work. “At times it even takes a week to prepare a single colour”, said the artist. “It is a tradition of labor”. The extraction of pigment from earth, plants and minerals adds diversity to the undertones of these colours, thus making the art work look like an enchanted reality. Shingraf[5], Indigo[6], Sap green and Sindur[7] are some of the colors that not only add richness but meaning to the imagery and enhance its meditative aura.

From her fascination for Geeta Govinda that grew into an affinity for traditional South Asian Art and lead into her PhD research, Dr. Susana Marin hopes to revive a rich cultural art form whose beauty had created captivating identity for the local arts and culture centuries ago.

“This language can still talk to people. It has beauty and spirituality that people can still relate to”[8]

[2] a mystical diagram, mainly from the Tantric traditions of the Indian religions. A form of geometric drawings that represent religious symbols.

[3] A genre of Pahari painting practiced in Guler state of Himachal Pradesh from 17th to 19th century.

[4] Is the term for a perforated stone or latticed screen, usually with an ornamental pattern constructed through the use of calligraphy and geometry. This form of architectural decoration is common in Islamic Architecture.

[6] Plant based organic dye that gives a distinctive blue color

[7] Red pigment made from powdered red lead, especially applied as a dot on the forehead or in the parting of the hair of married Hindu women

One Response to A LABOR OF LOVE