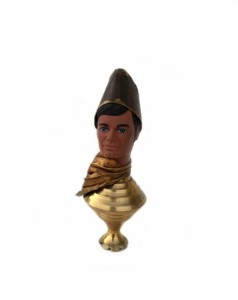 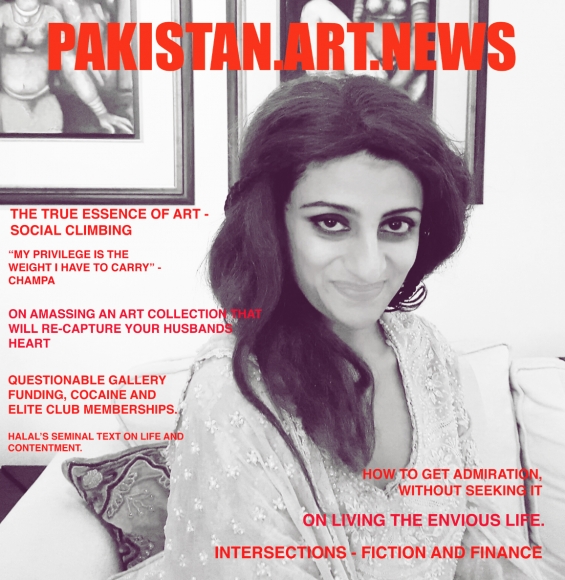 Sweeping Back the Sea

New York city’s Aicon Gallery exhibits works of fifteen contemporary Pakistani artists, inspiring its title “Sweeping Back the Sea” from video works of artists Omer Wasim and Saira Sheikh, the latter who passed away in 2017. The exhibition aspires to turn the spotlight on contemporary work from the heritage-rich country, by theoretically placing them under common social and historic grounds but almost misses to draw the works together practically, as curated in the space. It nevertheless educates audiences in social history, contemporary events, and individualistic studio art practices.

Each of the chosen artists focus on areas and themes that are definitive of her/his studio art-making practice. Affan Baghpati sculpts bronze and vinyl to showcase historically-steeped objects that are household names in South Asia yet are given little importance, or none, based on their mundane uses. “Surmedaani” for instance, is a small pot of “kajal” or black eyeliner gel, both the utensil and the cosmetic being mentioned in South Asian folk tales and literature. Associated heavily with a woman’s daily “bnao-singhaar” (make-up and grooming), a tiny bust of a male fellow sits atop the jar, wearing a turban of what seems to be reminiscent of workers from railways, post office and such. Similarly, “Safri Paandaan” which is another utensil/box for carrying “paan” (a sweet/savory flavored betal leaf filled with betalnuts and areca nuts, sometimes tobacco and various pastes), is sculpted with a bust of another dark-skinned youth, donning a turban that was once the required attire at a Mughal “darbaar” (court). The works might however be puzzling for Western audiences, unless the audience is aware of what the object is or can recognize the quintessentially Mughal headdresses of the artist’s subjects. Baghpatti has exhibited similar sculptural works previously in Pakistan, where he projects our gaze on not only the highly polished and crafted details of his sculpture via common objects but also has us question our understanding of South Asian history and contemporary realities.

Karachi based artist and recipient of Vasl Research Grant for Emerging Artists under Vasl Artists’ Association, Mujtaba Asif works with metal, terracotta, paper, and other objects to conceptually layer complex ideas, culminating in one of his finer works to-date. His interpretation of the deep-rooted prejudices based on gender, ethnicity, and religion that lurk in contemporary society reflects in his latest, the “Human Being Series” (2018) that also incorporates technical processes such as laser engravings on metallic surgical tools. For a while now, Asif’s works have gained a recognition for his individualistic artistic practice, where he has also maintained a dialogue with the viewers with his experimental work by participating in public art events in Karachi. Similarly, Maryam Arsalan uses oil paint to create objects (and not just a painting of an object) to refer to the so-considered allegorical human vice, gluttony, with whimsical yet almost sculptural works. “Cream Cheese Toast” and “Egg Toast” fashion out of smeared thick layers of oil enamel on plates, the material becoming the piece of art per se. In a way, Arsalan challenges Clement Greenberg’s celebrated medium specificity by creating an almost three-dimensional form out of a medium that was Greenberg’s muse for its flatness and qualities of abstraction.

Sculptor-curator Adeela Suleman considers the works of these artists to have moved beyond the dominant neo-miniature mode, (that still thrives in Pakistan and the art from the country exhibited internationally). Works of Asif, Arsalan, and perhaps everyone else, is a studio practice in their own individualistic right however a lack of spatial structure as they hang on the gallery walls fails to bring them together. As the art ticks all boxes of aesthetic and conceptual contentment, its visual placement is almost spatially confusing. Upon entering the gallery, one is almost lost as to where to begin from; the lack of direction that can be channeled through sharp curating or even a printed curator’s statement on the wall is exactly what almost misses to bind the works together in the gallery space.