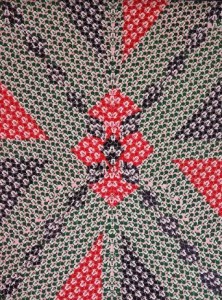 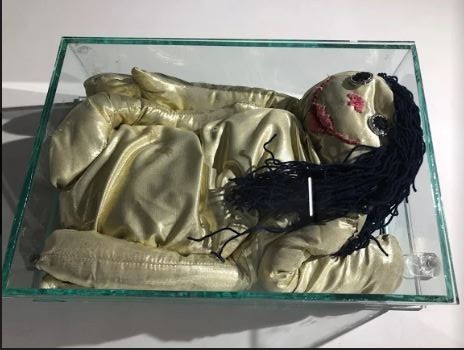 A show displaying multiple puerile cartoon characters in mini scale creating a weaved pattern for traditional Pakistani handmade fabrics of utility such as rilli, darri, and ajrak, provides a new vision of contemporary art by Farhan Ali. Ali  has graduated from NCA Lahore. He has exhibited his work in Pakistan and abroad in number of exhibitions, including, Swiss Biennale, Belgium travelling show, Indonesia and Dubai art fairs and many other international shows. His work is also displayed in Busra Museum of Turkey.
The show was displayed at Taseer Art Gallery, Lahore on 6th February 2020. He uses different cartoon characters like Mickey Mouse, Donald Duck, Bugs Bunny and other interesting images. Through this combination of Western borrowed imagery, he tried to disclose the impacts and influences of Western cultural icons on the minds of the younger Pakistani generation. He strained the images in a way that they create ample traditional design patterns that belongs to different indigenous cities like Peshawer, Sindh, Balochistan and Punjab. He amalgamated two cultures through these fascinating imageries and designs which discloses his perception about the strength of any culture and an impact on human mind of fostering in any culture. Simultaneously, he considers this strength of culture a fragile phenomenon which may be vanished any time because of its being preserved in human memory; therefore, he modified these into indigenous cultural patterns and tried to preserve as fabric designs.
He not only painted but displayed these characters into 3D forms transformed into stuff toys. These toys were made of using traditional fabrics like Ajrak and Rilli. In this manner, he presented a reciprocal cultural value of East and West. While describing about the concept, he explained that his work identifies with kids and the investigation about how they survive in their given circumstances. He teaches in both government and private sector schools. He observes big differences of their behaviors regarding nurturing in the available surroundings. He is inspired by his father who is a calligrapher and his brother who is an artist and game designer.
If we go through western art history, we find the adaptation of cartoon and comic character imagery by famous pop artists of modern art during 1950s, in which including famous artist Roy Lichtenstein used lovelorn comic-strips girls in Ben Day dots. Further, in 1960s added mouse, Donald Duck and Bugs in his compositions for the keen eyes to spot. Consequently, cartoons became basis for his works and he used as a medium for cultural satire and for emotional expression of love, war, hate and so on. Similarly, Yoshimoto Nara belongs to post war era and is associated with Pop art and Superflat movement. He used ubiquitous images to comment on consumer culture. KAWS started in animation brought that sensibility to the fine art market of that time. He released his first “Companion” vinyl toy, a subversive riff on Mickey Mouse. Art and toy collectors demanded for his creations. One more artist Takashi Murakami emerges during Superflat movement and like Nara he drew on visual style of anime and woodblock prints in his works. His highly saturated kawaii and creepy cartoon characters star in paintings and sculptures, and come in toy form as well.

Comparatively, we find similar stance in the works of Farhan but he uses the imagery not for any social commentary, or displaying sigma or as a reaction of social changes like war. He uses his imagery as a medium of presenting cultural value. He took incentive to work with the sort of concept. Although according to him, it seemed risky to paint the kind of work as Pakistani viewers are interested in conventional skills. Later on, his determination proved right and people took interest in his works. His work has been presented and preserved on international level. He categories his work as contemporary and modern but a reflection of conventionalism is visible through indigenous textile motives which displays his cultural connotation.