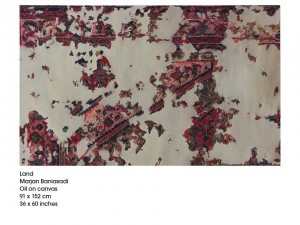 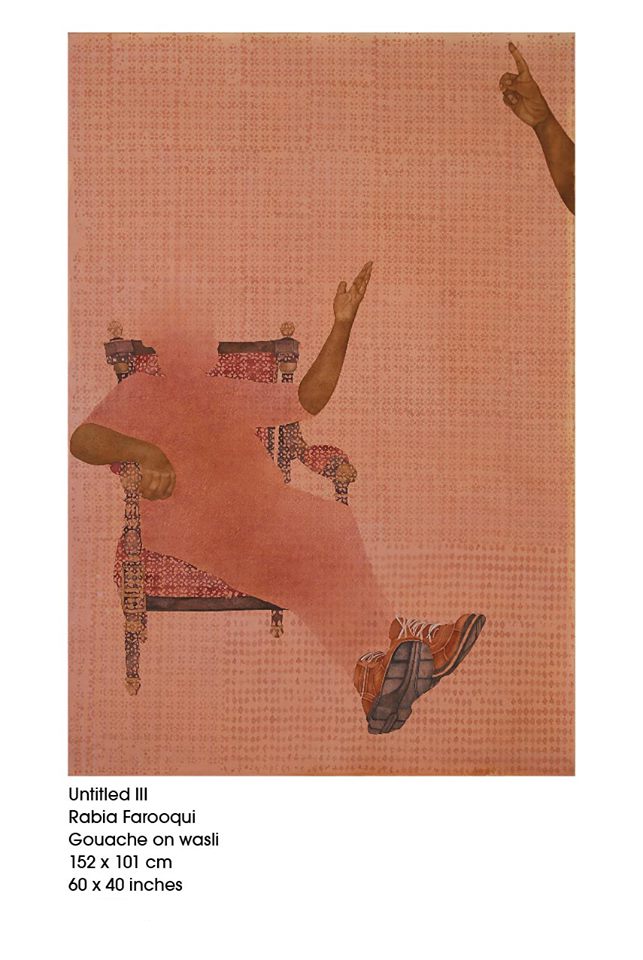 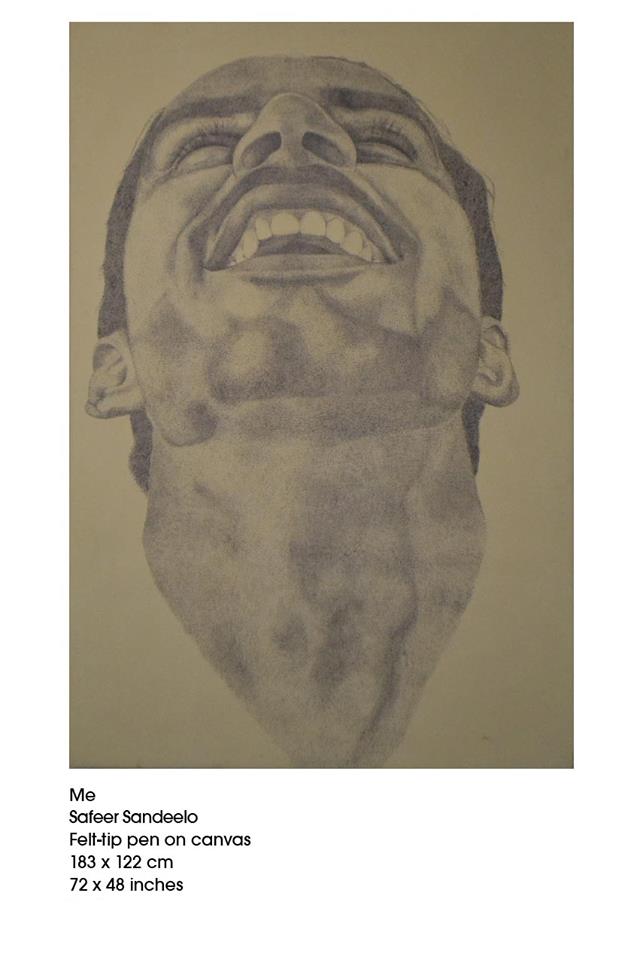 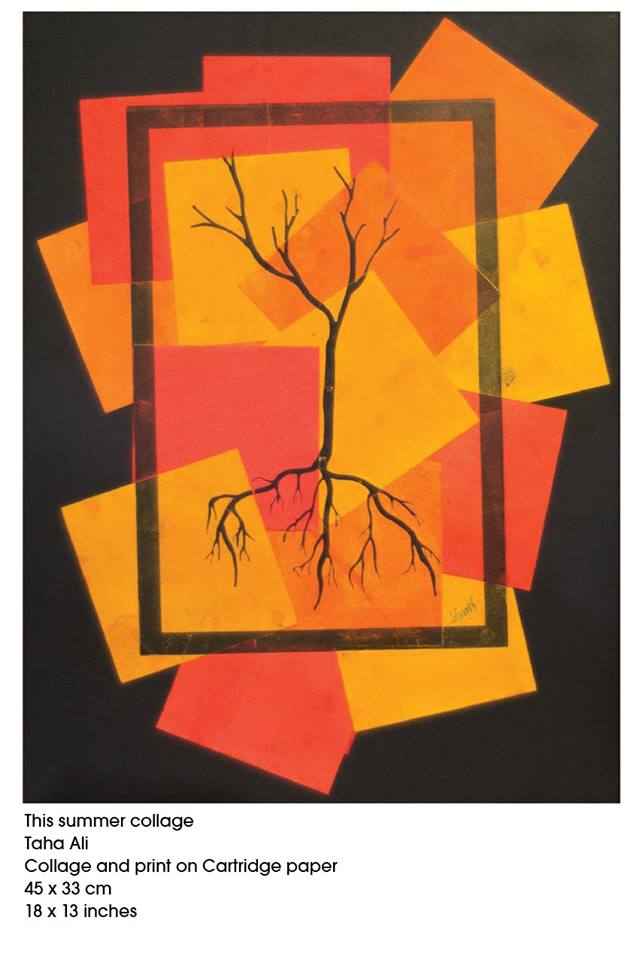 Neon; a group show curated by the internationally acclaimed artist Zeeshan Muhammad at the Sanat Gallery opened on 12th April 2016. Zeeshan strung together a diverse group of young artists; his vision itself was driven by a common thread between the artists.  He crafted the show, keeping intact the intellectual property of the artists, yet forming a fluid stream of works that seamlessly flowed throughout the space. Barring the aesthetic sensibility of the works aligned next to each other, they, on a more subliminal level addressed a similar theme of displacement. Displacement of hierarchy, geography, internalized displacement, externalized displacement or perhaps even the displacement of humanity itself..

Hues of rust, blushing with a silhouette; a placid tale of the drawing room debonaire and 10km walks. Rabia Farooqui’s paintings, exude a candid charm, with nonchalant head gears, sport wears and protruding bellies. The background and foreground divided in manner which challenges the viewer to reconcile with the idea of dimension in miniature painting. The images, riveting as they are, reminiscent of urban tales of fabled men. Farooqui has managed to craft surreal anecdotes using her gardner as protagonist as he adorns various accessories in an attempt to destabilize the nature of his duties. Using a traditional medium once glorified to immortalize the reign of the Mughal Emperors, she has managed to thwart the nature of representation by introducing her gardener as a subject. Using hand gestures she manages to assert a caution. Her imagery by virtue of its rather displaced setting leaves the viewer with anticipation.

Faraz Amer Khan, leaves the viewer a victim to the distinguishable line of the horizon. The sea, ravenous with a life of it’s own, clouded by the very threshold of man’s vision. Distinguishing between the seen and the unseen, Khan’s work sympathizes with the frailty of humanity and the inextinguishable idea of what lies beyond. He claims his work to be a mirror, leaving the viewer at liberty with the expanse of his own thought. His illustrations pose as finite, a moment captured; even still they breathe as they captivate, leaving the viewer displaced by his own internal perils.

Marjan Baniasadi recollects the tales of her ancestral home, whilst addressing the might of the carpet weavers she herself becomes them. Her painting, Land, is profoundly reminiscent of maps. Fragmented pieces floating, indiscernible boundary lines..For her geographical displacement is a recurring theme, she carries with her the threads of her memories, using them to lay out patterns; the manner in which she has painted invokes a sense of nostalgia and a tethering fragility.

Safdeer Sandeelo, gestures towards the perilous nature of media consumption, drawing a parallel with the noise that comes from black and white TV, he chooses to work in pointillism. The tediousness of creating his work, dot by dot, as they finally morph into his portraits, reads with a greater significance. The technique itself metaphorically alludes to the appeal of the masses, each dot pays its due into the formation of the familiar faces of our leaders, or the news channel logos.

A tree when disrobed remains a skeletal mass, a decomposing form, barren from the soil it once rested on, with the roots exposed. Taha Ali’s work pays tribute to the perished victims; the image of the tree, anonymous of the fruits it may have once bore, or the leaves it may have once wore, is left to be objectified as a memoir of death. Ali’s sculptural relief made of wax, addresses the redundancy of candlelight vigils. His works attempts to raise questions towards the idea of social responsibility.

Zeeshan Muhammad’s curatorial instincts are a worthy mention; with it’s rather contemporary aesthetics, the show was tied together as a solid visual piece. Farooqui’s use of earthen tones resonated the space with an immaculate air, the figures fondly graced the space with a solemn humor. When viewed in unison, her work bespoke with an undeniable assertion. Overall, the show offered a mature inquisition into the assorted trivialities associated with the nature of displacement.

One Response to Neon