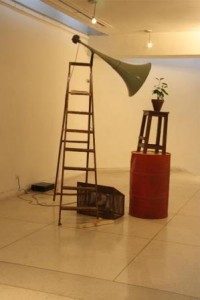 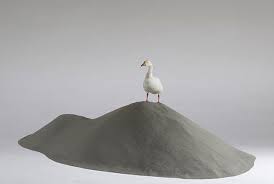 We sit on a sixth floor, small conference room with a close group of MA cultural studies students and Christopher Pinney… acclaimed anthropologist, photographer and author. Pinney is sharing a collage- presentation of his previous research and work after few intensive days of joyous and observant visits across the city – he refers to the word bricoleur; the handy-man during the discussion and the word immediately strikes my attention and curiosity. Firstly due to the new-ness of its sound and secondly because I believe secretly that it’s almost the definition of the artist I interviewed and had been writing on. I ask Pinney and he keenly shares about the French origin of the word and how there was once a street for the handy-men in Paris. He comments on the coated epistemology of the word and how it is also derived from the word hunting. He talks about the bricoleur as someone who can achieve all artistic and engineering possibilities just by using hands and putting things together…as I explore further I come to know that ;

“Bricolage is a French term for which there is no suitable English equivalent. The word as described by Claude Lévi-Strauss in The Savage Mind, a book in which the anthropologist demonstrates the high level of sophistication in so-called “primitive” societies: The bricoleur is someone who works with his hands, using devious means. His universe of instruments is closed and the rules of his game are always to make do with ‘whatever is at hand’, that is to say with a set of tools and materials which is always finite and is also heterogeneous because what it contains bears no relation to the current project, or indeed to any particular project, but is the contingent result of all the occasions there have been to renew or enrich the stock or to maintain it with the remains of previous constructions or destructions. The set of the bricoleur’s means cannot therefore be defined in terms of a project. It is to be defined only by its potential use, because the elements are collected or retained on the principle that ‘they may always come in handy’. The bricoleur derives his poetry from the fact that he does not confine himself to accomplishment and execution: he speaks not only with things, but also through the medium of things: giving an account of his personality and life by the choices he makes between the limited possibilities. The bricoleur may not ever complete his purpose but he always puts something of himself into it” (markersletter, 2010)
Ehsan ul Haq and I begin an open-ended conversation, an MA visual art alumnus’s work is lying in my office – bird cages shaped in different alphabets and we look at the rather improper office environment …Haq appreciates the left-over pieces of art around us. We are looking across the images of his work through my phone and the moment and its viability stand at the forefront through his language. He refers to the symbolic and metaphoric value attached to the incident of Noah’s ark and the temporary nature of the world. The incident where Noah had to succumb to a raft connotes an air of the outside world and its demons. Probably a lesson of sort that the outside world is bad and we need to work within. The movement of the event reflects how action is the only residue of existence and how all events are its residues.
We share about flaws and imperfections being the root of all work. Where finality is the last expectation as all is dispersed. Scattered clusters and random order of objects and beings comes together to create a new order. Haq stresses how he does not delve into the proper as it comes as static and mundane. Reaction and response are what mark the energy in a work, opposites, confrontation and the unforeseen mystery of ‘life as it is’. I ask him “what’s with the animals?” And he discusses our role of ‘being human’ in this world where we are the same- and-the other for many creatures. As human beings we arrange all creation as per requirement. Animals are domesticated and tamed and given a purpose for existence. He comments on the hegemonic ways of human psychology and the thin line between control and chaos. Who is in charge? While reflecting on ‘snow white and the gray sand’ Haq talks about opening up the boundaries of the human control – where deconstruction and destruction of preconceived mental image is an initial phase. And from there things happen naturally; for instance the white goose tries to make itself comfortable on the pile of construction material / grey sand – the white – serenity and softness of its being with the mirage of an island with the sand provided replicates an old truth in order to form a new one. This jolt to power and authority – a gamble played, a dice thrown for the final destiny of his own ‘art’ is where the artist wants to leads us. ..do we follow the goose to know about the work? As he verily puts it “it’s a power struggle between the creation and the creator”.
The dynamo ‘energy’ being the core of all activity – in one case the dynamo where a working class suited-booted guy keeps moving his legs , round and round on the bicycle to keep the bird in the cage…this act also puts the headlight on. Haq’s narrative is itself in motion, from documentary or mockumentary to struggle – it pushes itself further with the dynamic of added ‘life’ in the frame. The artist takes the liberty to choose a subject beyond his own control – the loss of control … dictates the work ..as Haq says “I make excuses in the work, excuses which make it look like a work of art, to steal the objectivity from it and take it to the abstract” where Mediums, materials which are unconventional, mechanical objects along with unexpected steps which would instigate objections – Haq challenges the thin line between the outside of a work and the inside – art or not art? – probably the creator’s participation is like that of the composer leading the orchestra – all music is pre planned and imagined but no one knows what they will eventually hear ; “unaltered, unchanged, out of synch of the real life, let every objection be a work of art”

“Lévi-Strauss’s concept of bricolage 1962, was originally presented as an analogy for how mythical thought works, selecting the fragments or left-overs of previous cultural formations and re-deploying them in new combinations. Significantly, from its source in structural anthropology, the concept has travelled in two directions, towards both the sciences (molecular biology and evolutionary theory) and the humanities (art criticism and critical theory)” (euppublishing, 2012)
A writer, painter, creator may not be able to join the dots at times. Sometimes it’s a dark holistic blockage. Almost like being lost at a dead end. The remarkable thing about day and night and the ‘love’ around us is that it never fails. The sun sets, rises, the moon appears beautiful – always – and one feels shaken in these dead ends available readily for the heart and mind. In Bertrand Russell’s words which I gaged a bit as a child in my aunt’s left-over philosophy book “nothing deserves certainty” this article comes to you after much time of meeting the artist at a wintery morning at the National College of Arts in my office. A reflection on Ehsan’s work gives me the power to challenge Russell – for everything uncertain would never exist without the magic of certainty, of being and happening. Ehsan’s practice is set on chance and uncertainty but it secretly creeps on ‘hope’ like poison ivy. Probably for every thousand cynics and pessimists there is one hopeless romantic and optimist. One sun is enough for this round world; my intention here is not to keep a halo of enlightenment around the artist’s or any other head but just a mere attempt to rejoice the fortune of those who ‘believe’ and take chance as the ultimate instrument.

Raw – Dialectic –‘ I don’t know anything’ and ‘it will happen once it has to’ even if the idea is choreographed inch by inch in his mind – it is open to situation, prone to accident – blatantly non-academic phenomenon that Ehsan ul Haq thrives on. It is an intuitive filtration – miracle – a bit of this and that forms his work. The words ‘work’ and ‘game’ might appear lowly for Ehsan’s playground. It is the joy of bringing form and story where nothing existed before.
“I want to stay in the present, all else corrupts the mind – Inside you know you are nothing – it is eternal nothingness. I’ve Read very few books in my whole life – the only thing I am interested in is making,” ‘the art question’ is his favorite book on art.