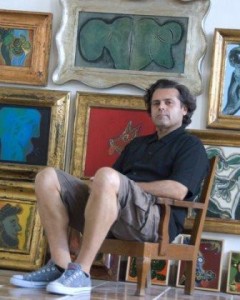 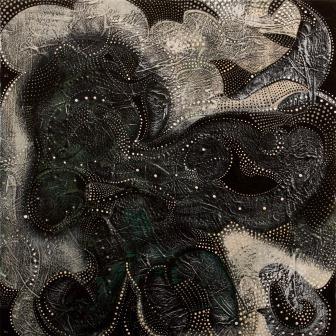 Unver Shafi Khan – A Painter with many Roots

A visit to Unver Shafi Khan’s studio reveals a capacious, high-ceilinged room. Diffuse light enters through the windows, filtered through the branches of a roadside neem tree. There are paintings lined up on the floor which rest against the walls. The floor is splattered with drips accumulated from years of work, a palimpsest of an artist’s labor. There is a sense of deep order, of a purposiveness that the visitor seems to have caught at its moment of repose.
A conversation with Unver reveals his deeply observant nature. He has a strong awareness of the complex processes that the artist engages with in order to transform the ineffable quality of inspiration into visual expression. Unver’s untiring engagement with form and color is manifest in his paintings which attest to a highly personal distillation of thematic concerns. His investigations into the perception of line and color are synthesized into painting that condenses years of inquiry. He has developed a personal vocabulary for universal forms and he reiterates: “Everyone must find their own velocity.”
Upon looking at Unver’s painting in the studio, it becomes immediately apparent that two varying dynamics are at play. There are the large-format oil on canvas paintings and the small-format acrylics on board. Whereas the grace of the sinuous curve and the presence of rhythm remain common to both styles, there is a notable difference in energy.
Unver’s large oil paintings are characterized by Apollonian restraint. The mood is cool, calm and tranquil. The biomorphic shapes feel unambiguously female. The female form is endlessly explored and its essence conveyed through minimal embellishment. Multiple layers of translucent paint and hidden complementary colors create depth in the shape of swelling contours that become distillations of complex emotions and ideas. Subtle gradations of light and dark allude to the quality of late afternoon light. The simplicity is deliberate and deceptive because it conveys the essence of an eternal, archetypal form that is perpetually engaged in voicing an open secret.
The mood shifts considerably from the oils to the acrylics. Unver’s acrylics on canvas represent an ongoing absorption with quasi-determinate forms that dates back to the nineties. What were essentially pen-and-ink drawings in Unver’s sketchbook underwent a metamorphosis from black-and-white to color. In contrast to the monumental oil-on-canvases, the small-format acrylics are characterized by playful ornamentation and boldly saturated color. Whereas the oils have transcended narrative content, the acrylics play with the idea of narrative albeit in a tangential manner. They are termed “Fabulist” by the artist because he wishes to recall the shapeshifting quality found in fables and myths that enables one thing to become another.
The dynamic of animorphism is evoked by swirls and irregular division of the picture plane. Fields of flat color are laid as paving in order to suggest human-like shapes and topographical division of space. The images bear a resemblance to Indonesian Wayang Golek or rod puppets, not least because of the white dots that are used as stippling. The embellishment goes beyond the white stippled dots as a close inspection reveals an embossed texture of foliage strewn through the work.
Whereas the stippling is common to each painting in the series, the color range varies from near monochromes in paintings such as ‘Original Idea’, ‘In the Court of the Romantic’ and ‘Jules Verne’ to intensely Fauve in ‘Afternoon at Las Ventas’ and ‘William Tell, the apple is your head’. These playfully enigmatic titles further reinforce the principle of transformation that Unver extracts as a foundational premise for his inspiration from fables.
The paintings under the Fabulist rubric present several characteristics of Naïve art. The intensity of jewel-like color, the richness of embellishments, the sense of frozen movement in deep space and the absence of perspective, all serve to suggest connections with tribal and naive art across several cultural zones. However, it would be disingenuous to imply there is anything naïve about Unver’s oeuvre. Just as European artists at the turn of the 20th century evinced a sophisticated attraction to non-European art in the movement dubbed Primativism, so does Unver indulge in broadening his visual repertoire by such apparent convergence. The process underlying the creation of these forms is highly cerebral. Unver claims to be “a painter with many roots” and the eclecticism of his Fabulist works is clear proof of this.
Whether practicing a process of diffusion towards archetypes in his large format paintings or, conversely, engaging in profusion of ornament in the smaller acrylics, Unver Shafi Khan is undoubtedly selecting his velocity with the utmost assurance.