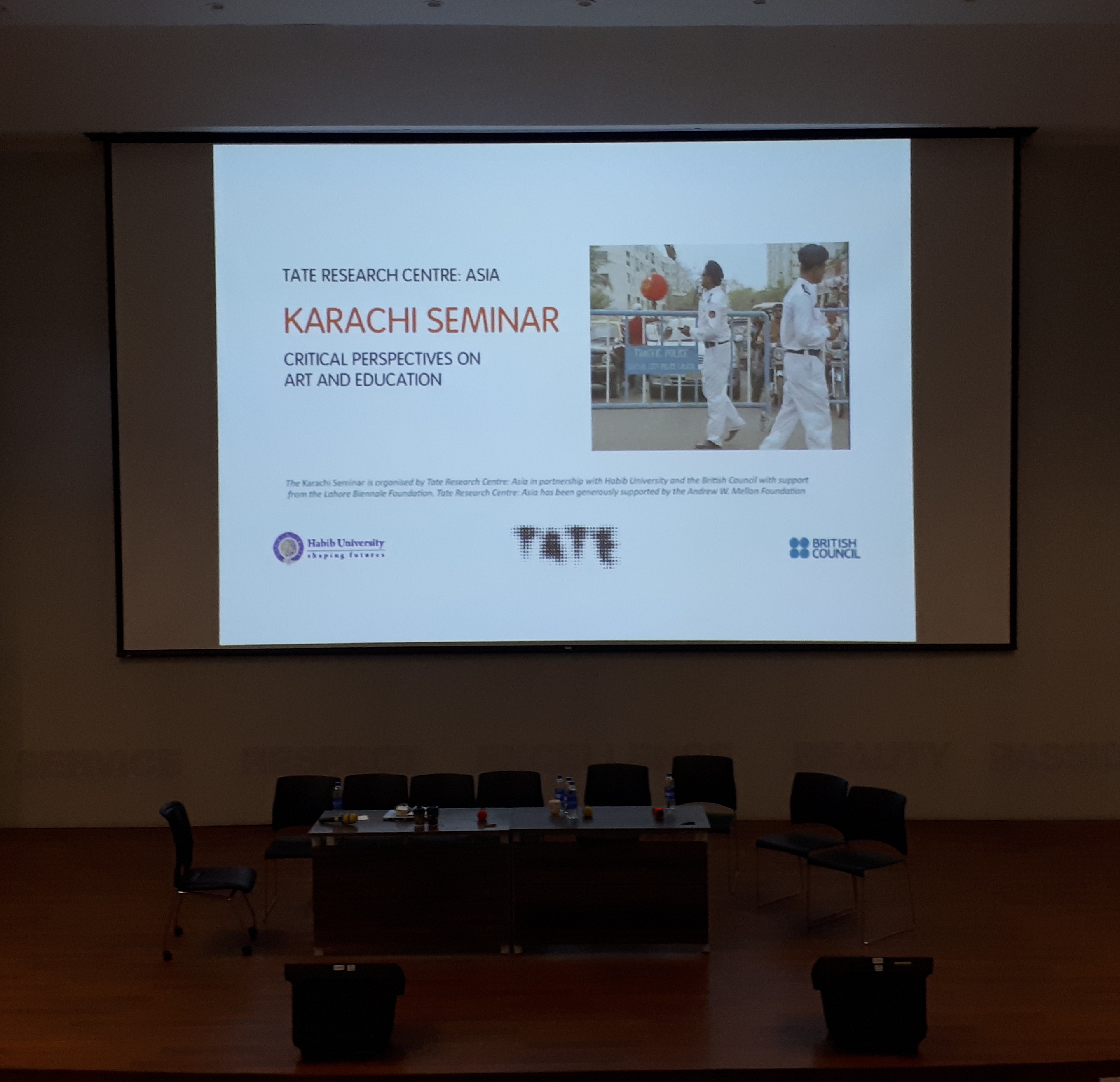 THE QUEST- CRITICAL PERSPECTIVES ON ART AND EDUCATION

ART IN PURSUIT, AGAIN
BOOK REVIEW| Monkey’s Right to Paint And the Post-Duchamp Crisis
THE ABC OF ART

Modern Art research is where the thinkers and doers combine their methodologies to find answers and is no longer limited to personal expression as explored within the framework of studio practice of an artist as a researcher. The new interdisciplinary orientation offers more meaning and value within the proposed outcomes.

The process of theorizing art research similar to enquiries in social sciences allows empirical verification of intangible notions, enabling researchers to build upon methods of observations that could not have been accessed through enquiry rooted in individual studio-practice. A much deeper exploration of ideas is possible through integration of these combined methodologies with studies of situated art and design. Such is the case of research work presented at the Center for Media and Design, Habib University by researchers gathered under the platform of Tate Research Center in collaboration with British Council, as part of LB01. The day-long seminar titled Critical Perspectives in Art and Education, held on 24th March 2018 included 12 research presentations and three panel discussions regarding the urban culture and ecology, visual art as a marker of history, and reflections on the phenomenon of biennalization in global and regional context.

The conversations around the visual culture and public art integrated into urban ecology and history employ narrative studies as the core methodology to understand regional socio-cultural evolution. Shedding light on this new found interest in integration of art with urban paradigms, the first sessions of the program focused on the projects where artists investigate certain crucial elements of modern consciousness surrounding art. Developing frameworks around the interactive and experiential practices within shared spaces serving as platforms for awareness, entertainment, relief and cultural enrichment, these researches also explore the role of implied boundaries within cities and how they shape interactive art practices. Nausheen Anwar moderated the discussion between Saima Zaidi, Shahana Rajani, Zahra Malkani and other presenters from the panel.

The second panel focused on historic changes in the art of the Sub-continent, significance of archiving for preservation of rich history and role of artists and galleries in shaping that history. It began with Saira Ansari’s exploration of gaps in history of East and West Pakistani Art, the politics and its influences on the exchanges and documentation of intellectual property between two art industries. Focusing on the first 24 years of independence, she studies the role of galleries and people behind them in an era that redefined the South Asian art through changes in art of East and West Pakistan.

Archiving is crucial for the evolution of the regional identity, as established by Samina Iqbal in her on-going research based on publishing of Pakistan Quarterly. She is studying the role these publications played in establishing the Modern Pakistani Art through the stimulating content it offered to its readers about regional and global art.

Building up on the argument of modern Pakistani art, Mariah Lookman discussed the role of artist as a social mark maker rather than a visual one and the significance of the practice informed and enriched by the reflections from various aspects of life. Her subject of study is Lalarukh whose work is grounded more in her practice as an activist than an artist and serves as a stepping stone for her successors. Sohail Aziz took the idea further in his research titled Karachi Pop by studying the contribution of several artists and institutions that breathe life into the art movement to shape the identity of Karachi in 1990’s. This movement is an evidence of cities becoming theological archives, preserving trends in form of architecture, public art, public spaces, social centers and landmarks, etc. Karachi Pop is about coming together of a collective identity of the city through public’s acceptance of the visual culture that the art movement instigated. Saloni Mathur moderated the panel discussion about significance of archiving and an imminent need for public access to those archives in order to encourage similar research undertakings among Pakistani artists and art students.

In third panel, Jyoti Dhar, Fiza Khatri and Sophia Balagamwala furthered the argument of art shaping cities as social channels through their respective research. Dhar shared her observations of Colombo Biennale, particularly the urban metaphors in artists’ work who displayed in the biennale. The changes she had witnessed in the art industry and its impact on the urban dynamics of the city. However, Khatri and Balagamwala highlighted the other side of the story by questioning the platitudes surrounding the make-do mindset they witnessed in the case of Karachi Biennale 2017.

The last presenter, Nada Raza looks at an even bigger picture where Indian Ocean becomes the catalyst behind development of a multi-cultural identity evolving across its coastal cities using art and art exhibits as the medium to portray the changes in urban undercurrents and indigenous identities. The Ocean serves as the core entity surrounded by the thriving art and cultural hubs anchoring strong geographical, demographical and time-bound identities.

Iftikhar Dadi hosted the final panel discussion for reflections on social and economic significance of the biennalization across the world. Where some appreciated the discipline to gather and organize such diverse experiences from one platform, others suggested that the model needs tweaking for better local contextual integration.

Modern art research is a rather interdisciplinary, emergent and evolving process as opposed to applied art methodology. It invigorates the existing processes in order to provide new insights and solutions to individual, personal and collective concerns, thus allowing renewed exploration of already studied subjects. The purpose is not always to come up with something new, but also to preserve or revive an old practice or ideology. The Seminar, Critical Perspectives in Art and Education offered the participating researchers a chance to introduce their respective interpretation of Modern Pakistani Art, and the attendees an opportunity to get in touch with Art research which is rarely accessible within Pakistan. Despite the duration of the program, the sequentially structured content kept the audience engaged and stimulated. Collective attempts like this enable considerably large audiences to benefit from the innovative approaches leaving some inspired enough to pursue path of enquiry themselves.