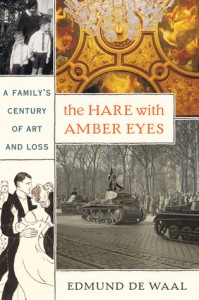 The Hare with Amber Eyes

Netsuke. Miniature wood and ivory carvings, fragments from the Edo period of the seventeenth to the mid nineteenth centuries, sold to art dealers at the height of the fascination for Japanese art and objects d’art in late nineteenth century Europe. Formed of the Japanese characters ‘ne’ and ‘tsuke,’ literally ‘root’ and ‘to attach’, these intricately carved, asymmetrical objects, measuring between one and three inches, were used to attach pouches or boxes to the kimono sashes of noblemen.

It is these objects that Edmund de Waal uses as a metaphor in ‘The Hare with Amber Eyes: A Hidden Inheritance,’ to trace his maternal family’s history.

One of England’s most famous ceramists, de Waal’s life centres around creating objects, uniting the principles of Eastern ceramics with a Bauhaus ethos. And his work embodies a philosophy, which is best expressed by quoting from the book.

‘How objects get handled, used and handed on is not just a mildly interesting question for me. It is my question…I can remember the weight and the balance of a pot, and how its surface works with its volume. I can read how an edge creates tension or loses it. I can feel if it has been made at speed or with diligence. If it has warmth.

…some objects do seem to retain the pulse of their making.

This pulse intrigues me. There is a breath of hesitancy before touching or not touching, a strange moment, a simple object, this cup that is more ivory than white, too small for morning coffee, not quite balanced, could become part of my life of handled things. It could fall away into the territory of personal story-telling; the sensuous, sinuous intertwining of things with memories. A favoured, favourite thing. I could put it away or I could pass it on.

How objects are handled is all about story-telling… There is no easy story in legacy. What is remembered and what is forgotten? There can be a chain of forgetting, the rubbing away of previous ownership as much as the slow accretion of stories. What is being passed on to me with all these small Japanese objects?’

De Waal’s story begins with a trip to Japan as an exchange student in 1991, during which he regularly visits his uncle Ignace von Ephrussi, descendant of the once enormously wealthy Ephrussi family. Ignace, or Iggi, as he is affectionately called, bequeaths him his collection of 264 netsuke at his death in 1994. It is then that de Waal asks his father, the ex Dean of Canterbury Cathedral, for more clues to the family history. From a small collection of photographs, two files of letters and miscellaneous papers, and a supermarket bag full of annotated Thomas Mann novels, the story evolves, moving from Paris to Vienna, Tokyo, Odessa and London.

Throughout this beautifully written book, which refuses to indulge in sentimentality or political wrongs, de Waal weaves the story of his family with that of the netsuke, originally bought by his flamboyant great grandfather Charles Ephrussi. The latter eventually gave them as a wedding present to his favourite nephew Viktor, father of Ignace and de Waal’s mother Elisabeth. Art collector and historian, patron of the Impressionists and one of the inspirations for Marcel Proust’s character Swann, Charles was the artistic member in a family of Jewish bankers whose business interests and extended family were scattered over the European continent. The netsuke are the key to unravelling the story of the family, which is reconstructed through exhaustive research, visits to former family houses in the cities mentioned, and the exploration of personal memory. Through it the author recreates a vibrant picture of each era that he depicts: nineteenth century Paris with its vibrant salons and new movements in art, luxurious turn of the century Vienna and the contrasting turbulence and radical social change that ensued with the first and second world wars; the deprivation of post war Tokyo. Finally, it returns to the root of the Ephrussi Empire, the city of Odessa, from which the family initially made its fortune by exporting grain.

The book’s subtitle, A Family’s Century of Art and Loss, sums up the theme. But in between lies the premise that what remains, however little – the netsuke made their way to England, where the family settled after the second world war, in a small suitcase – even these small, intimate objects are triggers of memory, links to one’s true inheritance, an understanding of oneself through one’s roots, through family history.

The Hare with Amber Eyes, Edmund de Waal, published 2010 by Farrar, Strauss and Giroux. Winner of the Costa Book Award (biography 2010) and the Ondaatje prize (2011).