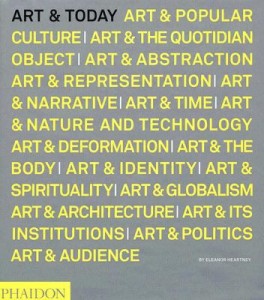 Art and Today is one of those rare coffee table books that offer a consummate insight into the paradigms that constitute the often baffling contemporary art scene of today. Eleanor Heartney explores the issues of our time with an ease and grace that eliminates the notion that all good art writing must, in essence, be polemical. She does not present us with new ideas or debates — that is not the premise of the book nor is it in keeping with its large scale, glossy format. In a review o the book Jordan Davis suggests that Heartney doesn’t aim to create the meta-narrative on art, but offers us a series of smaller micro-narratives that coalesce to create the larger, though fragmented picture But if she means to capture the attention and interest of casual readers, uninformed about the rules of the game, she fulfils this purpose entirely. She strikes at the heart of the conundrum of the postmodern condition by investigating its diverse fountainheads, its pluralism and the apparent anarchy that presides over the making of the art and the production itself.

Heartney says: “The real issue is that art can no longer be understood as an isolated phenomenon, pursuing its own imperatives without reference to the outside world. Nor can it be seen as a set of developments all arising from a common point. Rather, critics and art historians must now acknowledge that art is as likely to develop  as a response to outside forces – change in technology or geographical vistas, for instance, or the ever-increasing influence of popular culture  — as to the dictates of art history or its unraveling.”

To make sense of this diversity and multiplicity of , Heartney divides the book into 16 chapters, each section dealing with a prevalent notion that is found repeatedly in the art of today and we find that each of these ideas are the ones we grapple with on a daily basis through media and direct observation.  The first chapter Art and Popular Culture –The Warhol Effect, deals with the adoption of kitsch by Warhol, making it one of the great revolutions of our time; demolishing the barriers between high and low art and changing the ways art is perceived forever. Art and the Quotidian Object – the Transformation of the Ready-Made, explains the visibility of the Duchampian legacy in the vocabulary of present day art. The section Art and Abstraction –Retreat from Purity, affixes and elucidates the presence of minimalism in some artists’ works today to the abstract art of modernism. Other topics such as body, identity, technology, spirituality, dissent and globalism are also addressed in the book. Perhaps the only failing of the book is its almost absolute Eurocentric vision  and the perfunctory mention of artists from Asia, the Middle East and Africa meant to placate the reader only serves to enhance the absence of any substantial scrutiny of artists from other regions. Shahzia Sikander and Anish Kapoor both feature, enigmatically, in the chapter on spirituality and Kapoor’s Cloud Gate is discussed in terms of mysticism rather than metaphysics

Eleanor Heartney’s un-esoteric language and her readiness to deconstruct works of art without the jargon or postmodern speak is a refreshing look at the concerns that artists are tackling and the issues they are concerned with. An interested art newbie can easily assimilate most of the art being created in the world today after a read through Heartney’s book, a claim not enjoyed by many publications.