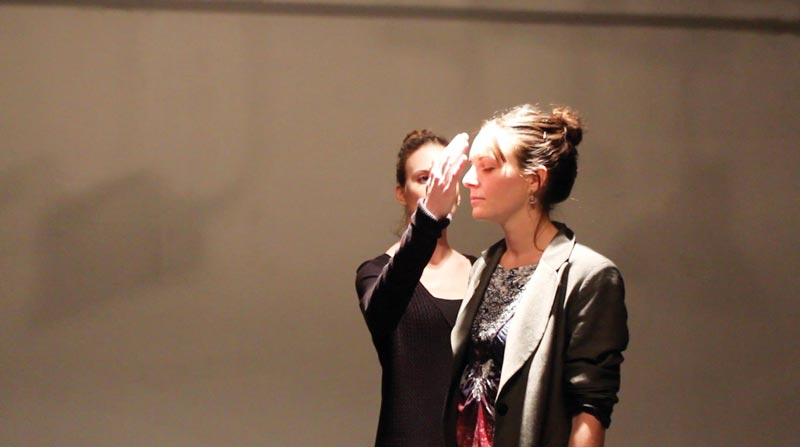 The Artist Visits the Artist

by Natasha Jozi
Yesterday, I planned to visit the studio of an artist – who I live with. For preparation, I borrowed some notes graven deep within the crevasses of my subconscious, and dug out solemn enquiries and questions for that artist. Anguish. I was flooded with anguish the moment I planned this visit, as I was uncertain what to expect from this conversation. I did however decide to direct the conversation to points un-territorized.
I visited Natasha Jozi.
Blank.
It was a debate we had with each other while we decided where to meet. I wasn’t too sure if she felt comfortable talking about her work in the studio where she ‘planned’ most of her projects. She gasped: “I don’t have any work in my studio, Natasha”. The moment I entered her studio, which happens to be at her parents’, a rather tiny room right across the stairway leading to the basement, I noticed – the walls.
Text mostly. Diagrams and a rough montage of brain mappings. Not much of a sketch or even a slight doodle did I find in her studio; she indeed was right.
Marina Abramovic writes in her Artist’s Life Manifesto: “An artist should not treat his work schedule as a bank employee does”. It is often very tiring for one to assume that to be an artist one has to parallel that with a strict work schedule. Contemporary work ethics compel one to be self-sufficient, to be the manager, the marketing head, the accountant, the assistant, the electrician sometimes, the procurement officer, the publicist – it can be exhausting to be an artist. The studio space becomes more like a site for working on personal relations rather than creativity.
Natasha doesn’t work in her studio. The work doesn’t happen in the studio, the work doesn’t get created in the studio. She introduced her medium, primarily performance art, as she initiated the conversation, as one which allows her to use her body to become a medium of the work; the body is the work. It was very surprising for me to hear – how can she actually do that? Pakistan is a country where the idea of the body, a reality that we all live with, is often not fully endorsed. The body is widely represented in the works of this region, the anguish, and the struggles. Historically the body is used as a tool in most of the paintings in the South Asian region as a rich symbol to denote identity.
Where do you place yourself within the context of the body in Pakistan? The moment I cross the domain of the surface in my art making, I come face to face with a deeper need, the questions of identity, the relationship of the body to religion, my gender and nationality. I delve into the relationships between the cultural and the political, but the fears it is not fears of the capitalist art market that hold me back, but rather fear of censorship. It is the fear of whether I have the liberty to explore my relationship to religion, to the politicized global identity of Muslims, more so of being a female Muslim artist in this politicized global world. I am not quite certain when something I say might get distorted, reworked, re-phrased, where they question my integrity.
What is the first thought every time before you decide to perform? Solitude. I aspire for that moment a person arrives at a space where no one exists but her, a moment of sheer peace and stillness. As an artist, one strives for this space. It isn’t necessary that one defines what that space looks like, or who makes that space. It is a fact that the performance-based work happens not within the comforts of the studio. There might not be any room for errors. It is raw. It is uninterrupted. It is unmediated. I am there right in front of those who look right at me – no veil, no encore. The relationship of time and space is crucial in all the performances that I do.
Natasha took out a book, Performing the Subject, off her shelf and read out a short passage for me:
“We abolish the stage and the auditorium and replace them by a single site, without partition or barrier of any kind, which will become the theatre of the action. A direct communication will be re-established between the spectator and the spectacle, between the actor and the spectator, from the fact that the spectator, placed in the middle of the action, is engulfed and physically affected by it”.
The relationship of performance to the body of the artist is not of one to be confused with theatre. Performance art is a conscious decision to accompany your body and enter into that universe, where the site of performance becomes your cradle and act becomes meditation. It is to open up to all possibilities and deviations one might lead towards, joy, empathy or anxiety. It borrows from postmodern thought, where the interpretation and meaning of an event, an object or a written text aren’t a determinable or fixed fact. Performance or body as art is unequivocally a conversation moved beyond theatrical manifestations. It is fluid, it is amorphous.
I repeat the act as the act repeats through me.
I begin every time with assurance that what lies ahead is familiar
The patterns that I need to follow are all thought through
Do.
Heartbeat – I am only human
I endorse the presence of the voyeuristic other
Heartbeat – I am only human
I endorse the presence of the voyeuristic other
I allow that to continue
Quite surprising that might appear,
In the time and reality where attention is drawn off from one,
Here I stand; I endorse the presence of the voyeuristic other.
Natasha Jozi is a performance artist, poet and writer. With a Masters in Studio Arts majoring in Performance art from Montclair University, she currently resides and works in Islamabad.
– See more at: http://www.artnowpakistan.com/articles.php?article=The-Artist-Visits-the-Artist#sthash.t5OOMgPD.dpuf