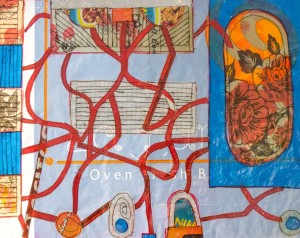 The Art of Choosing Well

Madiha Sikander
Mahmil Masood Bawany. Untitled. Polythene and thread.
It is interesting how each subsequent thesis show carves an institution’s accent. One can almost guess which institution a particular student or works hail from.
What seemed evident was that there was an obvious proclivity towards new media among the theses at Indus Valley School of Art and Architecture, Karachi, this year. There are several reasons why these mediums are underexposed in the Pakistani art scene, part of it having to do with their reputation of being just too esoteric — a reputation that leads many to credulously take them as ‘contemporary retreats’. However, new or old, every media requires a certain command, articulation and execution — and there are no shortcuts. Sanam Saigol’s digital work from a distance seems intriguing; however when one steps closer to one is led to disappointment. Take for example Syed Kashif Ali Mohsin’s animation Bed Bugs. If one chooses to work with Khatmals (bed bugs) as a hint towards the sectarian killing of Shias, one would expect the artist to at least study the character of the insect to be able to convey effectively the derogation of being compared to a measly crawling insect. Watching the larger than life bugs float around on a juxtaposition of illegible text messages, being zoomed out or reduced to blood splatters paired with the experience of walking on pea shells reverberating an exaggerated sound of crushing bugs raises contradiction. The artist doesn’t leave the viewers with a choice, making the act of being involved in crushing inevitable. This leaves one wondering if the artist believes that one’s involvement in the act and responsibility is inescapable.
Issues revolving around Karachi seemed to surround many students, a concern which perhaps comes naturally to them as its dwellers. Irrespective of their effectiveness, it is interesting to see the many ways in which it has fed their inspiration, almost like a muse. Among them, Fariha Taj’s works using lines to delineate the many conscious and unconscious self-imposed borders and limitations we walk around with as Karachi due to security issues. The disquiet compositions define the smothering suffocation that leads to in a childlike minimalism.

Mahmil Masood Bawany. Untitled. Polythene, thread, and newspaper.
Mahmil Masood sensibly and sensitively sieves through experiences and images that inform ones visual vocabulary and engages in a dialogue which critically approaches not just her concerns but also the mediums she employs to address her concerns. She humorously utilizes mundane polythene bags, which have great association to the aesthetics of Karachi and to the contribution to the clogging of drains, to address issues of consumerism and the association of value to possessions. By doing so she not only instigates a dialogue about the value one projects on things on a daily basis but also a greater debate about art and value and art as a commodity. Masood’s cautious choices not only justify her concept and its execution, but also the choices themselves. Thus standing out as a significant, well-articulated, coherent body of work.

Syeda Sidra Naz Bukhari.
On the contrary, Syeda Sidra Naz Bukhari’s work, though poignant, was surrounded by subjects that took away from her work, rather than add to it. This is where the tact of choice comes in. She doesn’t filter through or edit her dialogue, but puts to the viewer everything she might have, without weighting the existing meanings and symbolisms developed over generations through associations of habitual use, and if her intervention attenuates or surpasses those meanings. For instance the open book with the reading glasses was a far too arranged and orchestrated addition to inadvertent stacked setting of the furniture in the center of the room which initially resonates the aura of a kind of storage. Later, on realizing or being led to the different peep hole fixed in the different facets of the furniture lead one into an introspective space as thought having a short glimpse of moments of someone’s life. Also, there is nothing that leads one to unraveling the mysteries of symbolism the protagonist attaches to the objects. Leaving the viewer with no choice but to either ‘go figure’ or have the artist elaborate. The connections she builds with the old lanterns and the objects fixed on them are not recognizable.
Azher ul Haq Khan’s choice of using pencil, a medium usually looked upon as inconsequential is a bold feat. However, work seemed more like work in progress rather than the work itself.

Azher Ul Haq Khan. Aisa Kerain Aap Juice Pee Lain. Pencil on paper. 20″ x 25″.
Qurat-ul-ain Qamar Choudry’s body of work In Time dealt with issues of anxiety associated with the constant realization of ticking time. Though the over use of the clock had rendered a certain monotony to her display, her installation of 96 simultaneous ticking clocks stood out as an striking and conceptually ripe work. The work speaks to the viewer on twofold levels – tangible and intangible. In close proximity, the work speaks experientially, transforming the viewer into a listener.

Qurat-ul-ain Qamar Choudry. In Time.
What seemed to lack in many of the bodies of work in this years thesis was coherence. While there was a work or two admirable for various reasons, there was rarely a body of work that struck one as resolved and well-articulated. Leaving the viewer able to admire phrases of the dialogue, but not the dialogue itself. Choice is ultimately the most powerful determinant of where one goes and how one gets there. And it is perhaps the astuteness of that skill that any institution or degree aims to endow its students. What one awaits now is to see how many of them will even choose to continue working.
The Indus Valley School of Art and Architecture Degree Show 2013 was shown from 9-13 December 2013.
Madiha Sikander is a visual artist and writer based in Karachi.