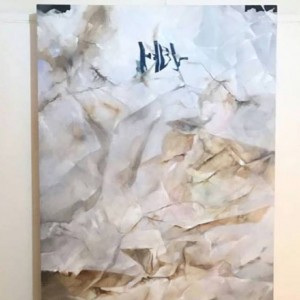 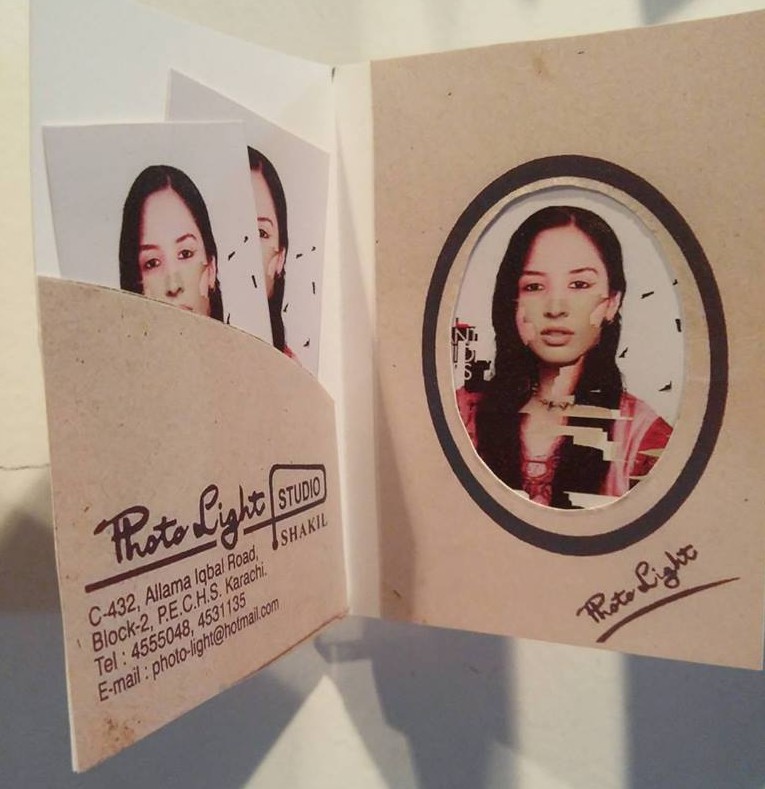 The Indus Valley School of Art and Architecture was established no more than 28 years ago by a group of established architects, designers and artists who understood the importance of such an institute in Karachi. Every year the beautifully bricked structure has hosted the end-of-year Degree show of the graduating students and this year was no exception. The IVS Degree Show was held on the 4th of December 2017 and each department pulled out all the stops, as they do every year, to give its audience an unforgettable display.

The Fine Art display, peaked particular interest for several reasons. With a graduating batch almost double of the previous year, the department displayed a strong painting oeuvre with a handful of artists delving into other mediums. This year, four of the artists were well deserved of distinctions for their work namely, Mohammad Idris Runijawala, Sakina Ali, Syeda Anousha Hassan and Shanza Raza Khan.

Syeda Anousha Hassan sparked rage, sadness and empathy with her installation. In a room designed to look like a family lounge, a phone recording was projected of what seemed to be a peaceful group of people marching on through the city. Suddenly, a loud boom, the camera shakes uneasily, clear that the recorder and all around are terrified at what has just happened. In the room adjacent lie multiples of ceramic feet, as if dismembered, along with fabrics hung, heavily embroidered to appear soaked with blood. Instantly, one realizes that the sound was an explosion and the second room is an embodiment of its aftermath. Hassan’s work is a reflection of the terrible bombings on the Shia community and the grave personal loss the artist herself faced at the time. With remnants of family members on one side and the strong imagery of the bombing’s gruesome results on the other, the artist forces you to empathize and feel the unbelievable pain of loss.

Another unique installation from the degree show was carried out by up-comer, Mohammad Idris Runijawala. The young artist took his love for understanding the inner workings of mechanisms and created paintings with it. By experimenting with liquid dispensing objects and attaching motors and gravitational supports, Runijawala allowed the odd-looking machinery to create abstract paintings by spilling black paint onto rolls of canvas. The automatic movement was lovely to watch and the work produced was even greater. The paintings became organic, spontaneous images that transformed the expressive and rigid back and fourth of the machinery.

With a similar colour palette, sculptor, Maha Minhaj created a studio in her space. With items the artist deemed important for surviving in an artist studio, Minhaj designed her section as so. Her sculptural work consisted of huge sheets of paper crumpled and molded into life-sized objects. From bathroom equipment, like the sink and toilet, to the giant ladder that stood in the corner, her work stood with the great strength that paper does not normally posses. Minhaj explored the ghost of the object, the presence but the lack there off. With charcoal she emphasized certain groves and impressions, adding to the make-belief life of the object. The detailing of her sink, right down to the impression of water flowing through the tap, was one of the highlights of the whole installation. It was quite intriguing to stand in the presence of three-dimensional drawings, which were excellently executed.

Areeba Shaikh was another artist that used paper uniquely, in particular newspaper. Explaining that this form of reading materials greatly reminded her of her father, the artist explored different ways of displaying the material. From creating box like structures, which were extremely strong despite it being made of newspaper to large carpet like pieces that were almost the size of the wall itself, the work truly amazed. These artworks had similar bases to ordinary carpets but on its surface were delicately placed pieces of shredded newspaper. The level of detail and sheer size of all the works was an absolute delight for the audience.

Taking ordinary paper to create extraordinary art was also replicated by distinction holder, Sakina Ali. Ali quite literally used whatever she had in her purse to create work. Old atm receipts, photocopies, assignments were replicated to the tee by the artist in the form of oil paint. On realistic objects like take away bags, discarded paint tubes and furniture, the artist painted hyper realistic papers complete with the various inscriptions. Along side, Ali displayed a HBL receipt painted on an 8ft canvas as well as scrounged up metallic sheets painted to look exactly like the crumpled balls of receipts one would find at the base of any ATM machine.

Noor Butt, one of the exciting emerging talents, explored her concerns through the use of typical passport photos and videos. Concerned with the pointless 21st century obsession with appearing ‘perfect’ on social media, Butt created passport size mug shots of herself, complete with the convenient case one receives from a professional photographer. Each image was digitally collaged to create variables of changed facial features to produce the ‘perfect’ image. Alongside, she displayed four videos, one of which was projected on mutilated sculpted faces all portraying the odd tasks of making oneself ‘pretty’.

Interior spaces inspired a number of painters this year. Sanya Hussain explored the relationship of memory, story telling and known reality. Intrigued by the stories of her mother’s house, a place she had never actually seen, the artist created multiple pieces of her translation of the space. With light colours, Hussain created ghostly, almost dream-like spaces with simple furniture. The soft treatment, coupled with the layering created a visual of uncertainty, which perfectly explained her struggle to enter the unknown space of her mother’s home.

Khadija Sheikh explored the interiors of a home through the memory of her grandmother. A loss that is universally felt, Sheikh painted spaces that were once used by the departed. Put together, the small canvases beautifully zoomed in and out of the space. In contrast, Ameera Motivala painted on wall-sized canvases, which also explored the dynamics of the home, with specific concern for the dining room. She attempted to understand the importance of the room in relation to bringing families together, despites various other personal factors. Sara Yawar was intrigued by the insides of her neighbors’ houses. Through painting and an enticing video installation, the artist gave us a voyeuristic view of these strangers’ lives. Sanaan Shamsi stepped out of the building and painted massive works of different angles within the space. Whether it was looking down at a flight of stairs of looking up to the top of the building, the skill and composition were exceptional and really added to the feel of the work.

Bushra Fatima worked with distortion and bright colours with household visuals to create mind-bending illusions on canvas. Mariam Khan took misconception even further with her paintings where the play of colour and detailed line work created abstract paintings that appeared as objects from certain angles. Fareha Hassan played with geometric distortion to discover the traits of her family members. With vivid colours, three-dimensional illusions, her work intrigued the viewer to keep on looking.

In the IVS gallery, 200 minuscule canvases hung in grid formation painted by artist, Shanza Raza Khan. With many similar scenes, one could hear several viewers point out how each canvas looked like a scene from a particular movie or game. Khan’s works reflects on the continuous violence the world faces and furthermore the use of the ferocity as a form of entertainment. It then becomes a visual example of how desensitized society has become to this mistreatment that audience can casually stand in front of these 200 pieces without fear but rather excitement. Zainab Sheikhboy used videos and unique wood creations to depict life in the city of Karachi. With alternating imagery, she created wonderful three-dimensional illusions of the work almost coming out at the audience.

Rahima Junaid used her daily struggles of functioning and created lovely visuals. Dealing with damaged hearing, memory loss and anxiety, Junaid produced several shakily drawn objects almost as if obsessively trying to remember where they were kept or whether they existed at all. Also dealing with emotional stress, artist Shiza Hai documented several places in the city where she was subject to car accidents. Almost as a way to cope with these tragic events, the spaces were masterfully painted and appear beautiful and serene as if nothing ever happened there at all.

Ali Ashraf ‘s enormous sculpture was the standout piece of his space for obvious reasons. One could not take their eyes of the unusual structure with it points shooting out at every direction. This was accompanied by a video projection and canvases layered with treated tape all through which the artist attempted to understand man’s relationship with nature. Near Ashraf, in a small passageway were the delicate sculptures of Koonj Syed. Made from electronics pieces like circuits and motherboards, the artist created jewelry and various items that were displayed like artifacts of an unknown but some how similar world in acrylic boxes. They were accompanied with titles and short description of their possible time period and probable use at the time.

Delving into the possibilities of graphite, the three remaining artists conveyed their concerns through the simple use of pencil of paper. With beautiful skill, Dania Shah Khan followed the life of a flower as it travelled through motions and eventually found itself near a used Marlboro box. Zainab Abdul Syed looked at the power of the clothing she wears as a Bori woman. She replicated images of manly objects such as motorbikes with the simple cover up and questioned the dynamic of gender and caste through her work. Finally, Shahzadi drew portraits with Mughal miniature references to depict her time spent during the four years at university.

With a batch of 23 students, the Fine Art department worked hard at creating an exciting and visually appealing degree show. Though one would like to have seen more experimentation, the artists displayed wonderful traditional skill and commitment.