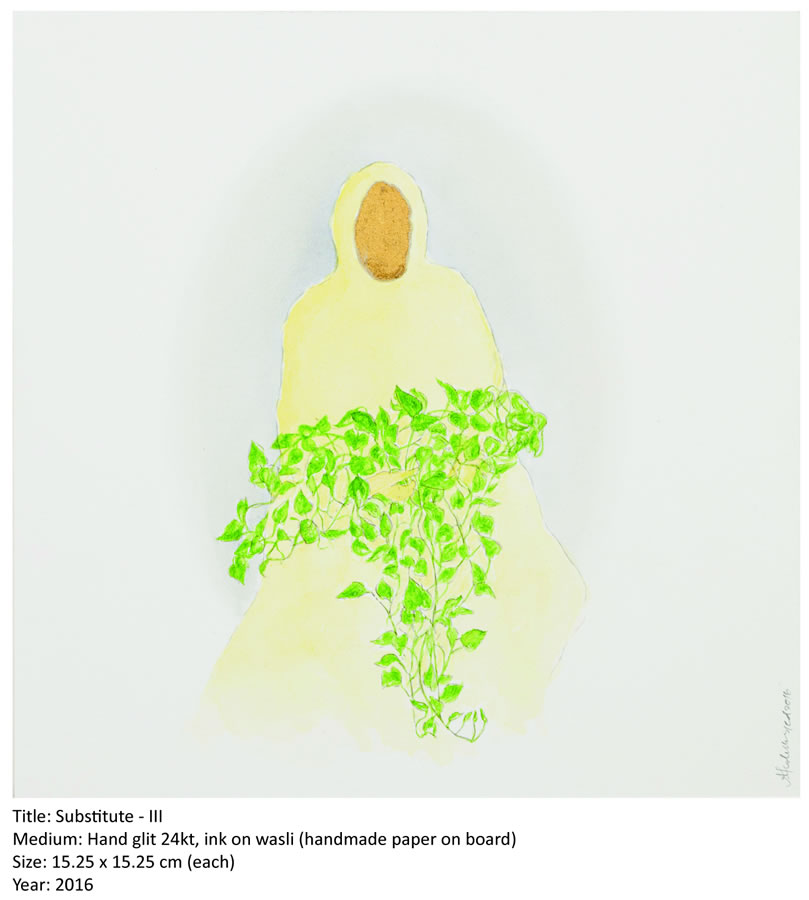 Substitute: The Untold Narrative of a Mother & Son

..Once, I heard that one should never ask for a money plant for one's own garden Soil is romanticized as the the proverbial land that we

Defining the Intangible
Leonardo do Vinci: The Mechanics of Genius
A Tapestry Of Tales

..Once, I heard that one should never ask for a money plant for one’s own garden

Soil is romanticized as the the proverbial land that we live on. Porous, retentive, permeable. As territories are demarcated, the soil acquires a sentimental virtue. Men too, are beings of clay. Soil is in itself a medium of divine creation. Vertical growth that isn’t man-made is a by-product of soil. It grows, just like the child that learns how to walk, grasping the air, fighting the pull of the earth as he learns to stand. Ammi’s letter illustrates an anecdote where the money plant becomes an object that she acquired perchance; the money plant becomes symbolic of divine gratitude. The humility in nurturing soil and watching it reap. The nuanced rendering of the money plant as it acquires a human role within the Syed household becomes akin to the abundance of it. The persistence of it. It’s resilience to prove itself as a living being.

My house has never remained empty of money plants.

The sensitive rendering of Syed work lies within the nuanced lettering of the subject pronoun. Where the object becomes ‘hers’. Camouflaged beneath the mottled edges, used linens, leather bound liaisons..one sees the portrait of her. We do not know her, but we see the docile apparitions of her within the things she chose to live with with. The nobility of the objects as they posed subserviently for Syed’s gaze. Taken from their weary routines they became dutiful towards photographic atonement. They belonged to someone. It evoked a sense of nostalgia, though indiscernible, the audience can identify memories pulsating within the objects and yet may indulge in the luxury of attributing their own memory to it. Perhaps the atonement lies within the rendering of a mass-produced object into a precious belonging. Precious because they were hers.

The continuous sprout of the money plant keeps  the Syed residence abundant. It sprigs, hiccups and sprouts anew. Come winter, summer, it stumbles and skips, dancing in green. Pallor hues of yellow carefully plucked and parted.

Syed’s works meander into the contested space of the masculine and navigates through the dialogues generated in contemporary renderings of the global citizen, the immigrant and issues regarding diasporic settlements..

The gendered aspirations attributed to sons, given the cultural context, becomes uncanny with the idea of ‘abundance’ in itself. The son is heir to the monetary responsibilities. The cultural doctrines indicate man to be one who earns, sustains. The money plants in a literal discourse draws into how the male functions, and the livelihood and lineage he promises by virtue of his masculinity.

The established iconography of the Mother and Child imagery belongs in the realm of Western Christian art. In Syed’s interpretation, the substitution of the child into a money plants perhaps illustrates the relationship of the male within the a territory that is a premature immigrant from the East into the West. A religion that migrated into a Western realm, despite it’s Eastern origins. The patronage associated with the creation of The Madonna and Child imagery treads on a fine line of commodifying religious iconography. The iconic renderings have filtered through in the centuries since. Given the economy of images in the age of print media and the function of religious renderings as such, the narratives of religious autonomy and the dichotomy of the active and the passive is inevitably observed. The active production of images, and the passive consumption of it. The consumption of it attests to the widespread production of it. The money plant, in it’s abundance, becomes that. It was hers. But in Syed’s appropriation it becomes symbolic to not only personal narratives but seeks to tread upon narratives that are globally amassed.

The rendering of the personal and the political are subtly woven within the works. Where the object appropriates the vessel for the fragile nature of a memory in itself and yet it becomes a fixture that allows Azra’s routines to be maintained, it sustains her presence in the multi-faceted world of an immigrant.

Her multipurpose weighing scale on which she hand-marked 21kg and 30kg to identify weight restrictions for international travel discreetly harrows the travels and the fleeting nature of her home. A scattered household held in countenance for its monetary aspirations. The search for lands beyond, in promise of education, opportunities..the son..the sun as he lights onto the money plant as it grows as one of Azra’s offspring.

The objects became memoirs; affliction, longing, pain, mirth, sustenance all meticulously settled within the scalloped edges of the rumaal. Objects that cant be discarded, they become relics. A testament to her existence. Her motherhood.

Some plants grow freely on the surface of the earth others grow, albeit frivolously, within the confines of a planter. The soil dispensed into a vessel to retain growth. The soil, porous, retentive; in the shape of a mass-produced terra-cotta planter.

I tie them into a circle. In such shape, they look beautiful

In the age of cultural mobility, the dislocation of the object and the inevitable role it plays as it occupies a foreign space addresses issues regarding shifting cultural geographies and migration. It evokes with a nuanced sensitivity and yet it is abrasive in its intangible permutations. The nature of acquisition and preservation firmly braided with the numerous apparitions of Azra. There is never a facial expression, her stories a montage of the objects that she’s surrounded by, the plants she loves, some of indigenous origins that can only be found in the land she calls home now. The immigrant, the nurturer, the lady whose wardrobe contents spilled onto isolated backgrounds; capturing the varying octaves of living and idle acquisition that sustains life.