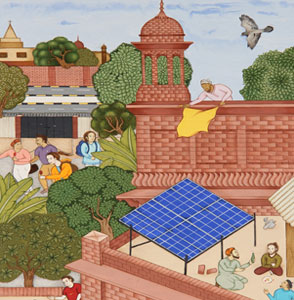 Same same but different: “A present in duality” in Tehran

It is hard to imagine how it is to have an identical twin when you do not have one. The exhibition “A Present in Duality” shown in Azad Gallery in Teh

I Worship Not Work
Illusions and Dimensions
John Holt: The Art of Flow

It is hard to imagine how it is to have an identical twin when you do not have one. The exhibition “A Present in Duality” shown in Azad Gallery in Tehran, Iran, by the emerging artists and twin sisters Maryam and Marjan Baniasadi, gives an idea how same same but different can look like in the art world when twins are not subject to representation, but producers of art themselves.

Thinking of visual representations of twins in visual arts and popular culture, twins are depicted often inseparable and creepy mirror images of each other. Exemplary are the iconic twin girls in Kubrick’s “The Shining”(1980) or the ubiquitous and dreadlock wearing Albino brothers also known as “The Twins” with translucent powers in “The Matrix Reloaded” (2003). Like filmic representations, paintings and photographies visualize a mysterious and secretive atmosphere created when two subjects, looking alike, are put into similar clothing from head to toe: Joseph T. Pearson’s painting “The Twins: Virginia and Jane” (1917) situates the young girls in front of a cobalt blue surface in light pink dresses and with motionless faces. The table positioned between the twins, however, creates a dynamic relation which is more than a mere mirroring: the object connects the twins while at the same time separating them and hence creates a potential for complex social relations between the siblings such as disagreements, misunderstandings as well as empathy. The table represents the silent language of the twins, which just they can understand. The space between them allows the viewer to perceive difference and individuality. Hence, thiscritical approach to being and having a twin engages with being same same but different – which makes the idea of similar looking twins less scary. Thinking of twins beyond the idea of mirror images of one another highlights the depth and diversity of social relations among identical looking individuals like the cheeky and creative pranksters Fred and George in J.K. Rowling’s “Harry Potter” series or the smart, kind and multi-talented Sullivan twins in Enid Blyton’s“Hanni and Nanni”. The Baniasadi sisters’ exhibition itselfis a performance complicating popular notions of twinshipby visualising how same same but different artistic creativity can be materialised in “A Present in Duality”. Both Maryam and Marjan, born in 1993 in Tehran, gained their Bachelor’s in Fine Arts and are currently doing their Master’s in Visual Arts at the NCA in Lahore. However, while the choice to articulate themselves through visuals,Marjan chose to focus on painting while Maryam did her major in miniature.

Marjan’s choice to engage with old and used Persian carpets with oil on canvas invites to think about the social as well as lonely features of carpet weaving. In Kamal Tabrizi’sFarshe Bad (The Wind Carpet, 2003) the little Japanese girl Sakuro and her father come to Iran trying to keep the memory of her deceased mother alive by realizing her wish to weave a carpet in Isfahan, Iran, which she had designed in Japan. In Isfahan, the local women and men weave day and night in shifts surrounded by handmade mountains of threads of all colours and children. One person says with a singing voice which thread colour to use while the other executes with rapid movements. The bleeding fingers of the tapestry weavers, cut by the sharp knives and rough threads, are wrapped in the very threats used for the carpet to stop the bleeding. When the last threads are being weaved everyone involved in the making of the carpet is called to make a knot and wish which God will make come true. Every hand-woven carpet is not just a product of hard endeavour, but also embedded in it are multitudinous stories of love, pain and struggles that life confronts us with. The strokes, shapes, floral patterns and elements in Marjan’s work represent the hardship hidden behind the beauty of a carpet. The old carpet such as in the “Fragmented Fragrance” has seen people come and go. Time has left its prints on the classical red and crème coloured design, white fields cover the carpet and it is as if its skeleton has come to the surface: the white threads around which the colourful threads have been knot are visible. There is an irreparable pain in seeing a carpet losing its face, while it has developed a new one. The white skeleton of threads seems like a curtain hiding the ghosts of the many stories it has been entrusted with. The ghosts are fading away in the background of the painting for eternity. The artist celebrates in her work the aestheticism of imperfection and unfulfilled or yet to fulfil wishes and the passing of time. There is melancholy surrounding the soft carpet in “Adorning” for the days of childhood as described by the deceased iconic Iranian singerFarhad in BuyeEydi(The Smell of New Year) as the “smell of Jasmine flowers on grandmother’s cashmere praying carpet”. The famous Persian carpet and all the life stories which weaved themselves into it receives in Marjan’s paintings a contemporary dimension which is closer to everyday life then the perfected image of the Persian carpet: these carpets have lived and suffered with their owners.

In contrast to her twin sister, Maryam’s paintings engage through a different path with everyday life and time. While Marjan’s carpets embody an archive of knowledge which has to be reconstructed, Maryam’s miniature paintings show archives of knowledges in the making:highly skilled the artist visualises from an elevated perspective her view onto a rooftop of the NCA campus, its studios and surrounding streets in the heart of Lahore. Like everyday life photography of urban spaces from Lahore to Kabul and New York grasping the dynamics of movement and action, the paintings freeze time and observe the characteristics of old Lahore. People are on the move, producing and creating while time seems to pass by without anyone noticing. Contemporaneity is created through Maryam’s precision: the artist dresses the subjects in her work as much as the spaces with objects absent in classical miniature. Exemplary in the “Taste of Ice Cream” are solar cells on the rooftop of the NCA while young brand-wearing men are smoking below in a corner of the campus and students are heading through the street carrying red ice cream in their hands. In contrast to a photography, the painting “The Printmaking Studio” crystallizes what the artist perceived as characteristic of the space. Students are rushing from one machine to another, discussing, evaluating and thinking. The snapshot of a moment in the studio seems like an attempt to stop time for a second: students have been frozen in their dynamic movements and interaction. In “On the way home” ravens are resting and spreading their wings on a loosely hanging cable while a car is entering from the left the scenery and a mother walks with her child by the side of the street. The artist controls the chaos of the urban space. The constellation of subjects and objects in the paintings visualise life on the move, there is no stop unless the artist decides to stop it for a moment before the ice cream melts away, day becomes night and the printing process is finished.

Maryam and Marjan’s very different ways of approaching the passing of Subjects and objects through time visualises “A Present in Duality”:the artists engage with the making of human life stories. Maryam grasps regularities and rituals in everyday life within urban space which itself embraces the old and the new as well as the personal and the public. Marjan examines theaccumulation of these moments, the threads,which altogether create our shared and individual archives of knowledges that we can look back at every second we decide to do so. What connects and separates the twin artists, just like the table in Pearson’s painting, is embodiment and the uncontrollable continuous movement of time. The experience is same same but different.

Paniz Musawi Natanzi is a PhD candidate at the Centre for Gender Studies in SOAS. She holds a BA in Political Science from the Free University of Berlin (2013) and an MSc in Comparative Political Thought from SOAS (2014). Paniz has published in the German daily newspaper taz. dietageszeitung, the French revue l’imparfaite, the international feminist art journal n.paradoxaand has a forthcoming book chapter which is going to be published by Hurst & Co and Columbia University Press in 2017.