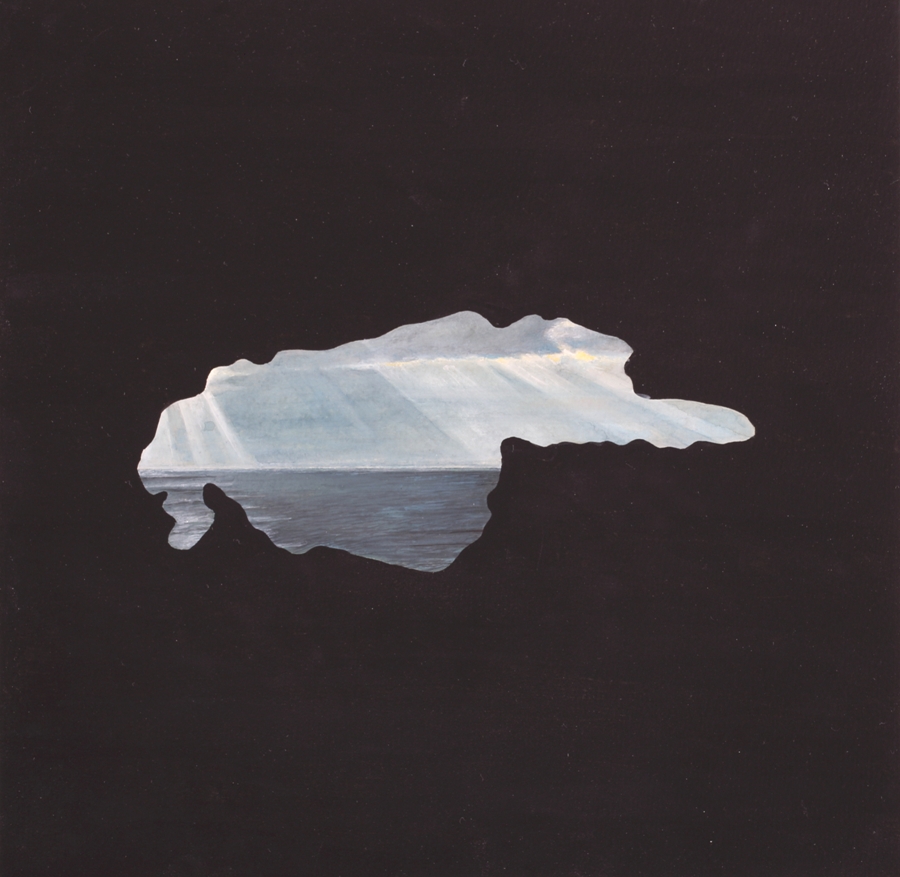 Is it a swallow in flight, or a slow dagger ascending, a map, a mask, the gruff mouth of a cave, or perhaps a nameless form? Sri Lankan artist Muhanne

Is it a swallow in flight, or a slow dagger ascending, a map, a mask, the gruff mouth of a cave, or perhaps a nameless form? Sri Lankan artist Muhanned Cader presents a series of seascapes at Koel Gallery, Karachi, this April. The exhibition is discretely entitled “A Different Lens”. Rendered in small format – gouache on paper and oil on board – the images themselves appear lyrical, almost meditative to view. As process, Cader meticulously marks out a frame for each work, painting the inner body or vista in quiet colors. Here, a muted blue, flecked with grays and pale whites, then finely wrought rays of streaming light from cloud-break overhead. Each miniature image of boundless sky and sea is contained, by contrast, in a black, morphing shape that almost resembles something known. Is it a lion, or a jester, a dove, or human bone, a crevice in sheet rock? As one of several productive paradoxes in his work, Cader’s frames proliferate visual possibility but in turn resist any fixed semantic reference. His seascapes are at once opaque and transparent. Their place of view, neither this nor wholly that thing. Collectively, the series creates an ambivalent native environment, a shape-shifting ecology that lies at the heart of the artist’s practice.

Cader’s initial training may be traced back to the School of the Art Institute of Chicago, from where he graduated in 1994. His signature style developed there under the aegis of artist and mentor, Ray Yoshida. In an interview with publisher and curator Sharmini Pereira, Cader clarifies the source of his stencil patterns: “The forms in my work are usually always abstracted from close observation of things around me.”[ii] That is, they are not whimsical fragments per se. Based currently in England, Cader reveals a number of references for this particular exhibition. He has closely studied the works of Turner and Constable, British masters of 19th century landscape art. His painterly sense draws impetus from mark-making in their early work. The seascapes themselves are based on observations during a trip to Croyde Bay, Devon. In turn, the conceptual intent for their framing comes from the war-marked landscape of Jaffna. Conceptually brooked together in the way of collage, his images convey a sense of vast imaginative flight, viewed from behind rent surfaces or places of hiding. The works are individually titled ‘cavescapes’.

“My main intent is to break the frame,”[iii] Cader indicates. And it is here that his art historical engagement turns incisive. “That is why I remove the rectangular frame that surrounds the landscape in my drawing. It is similar to asking what surrounds our understanding, or do we only ever know part of the truth?”[iv] In his reference to partial knowledge, the artist not only alludes to the subjectivity of particular lived experience and to processes of meaning-making. He also queries fundamental ideas of ownership that underlie landscape painting in western art.

Historically, the genre’s origins may be located in the late 15th and early 16th century, wherein ‘settings’ gradually gained significance beyond service as backdrops to historical or religious, mythological works. However, for a range of reasons landscape acquired fullness of stature during the 19th century. Idyllic, pastoral images came to function as counterculture to the gaining prowess of new metropolitan centers. This, whilst also marking national terrain amidst the turbulence of broad colonial enterprise. The genre, in its circulation, accrued a kind of totalizing meaning. Presentations of a nostalgic, nativized land – eternally settled, historically deep, and ontologically bound – served as the high ground for western landscape art, and for colonial curricula of the same.

During the latter half of the 20th century, postcolonial thought, as well as deconstructive method and eco-utopian projects, have each re-engaged representations of land in art and literature. One may place Cader’s critical project within this interrogative trajectory. The shape-shifting energy of his works, and their cultivated irony, may now be viewed in wider perspective.

“Whilst I try not to be obviously political, my work seeks to problematize the inherent politics of image-making.”[v] In so doing, his landscapes in particular destabilize the very category, such that new relations are made possible. These new relations refuse totalizing form and semantic fixity. That is, they refuse meta-narrative – the draw towards isolating, hierarchical ownership in the way of imagination and realpolitik. Instead, Cader’s art celebrates a kind of conceptual openness. This is based on values of opacity, mutation, and, synchronic space fabricated through a cross-cultural poetics. The current exhibition’s visual simplicity belies its richness of thought. And that perhaps is the critical and cavalier pleasure of “A Different Lens.” Land burdened with claim may, in his works, become land itself.

Although rooted in Sri Lanka, Cader has travelled extensively and has lived in many places, including two brief periods in Pakistan. In 2002 he was invited for a residency at NCA (National College of the Arts, Lahore), by Lala Rukh, fellow artist and then director of the Master’s Fine Art program. He returned for a second stay with partner Mariah Lookman, before moving to Oxford where she is currently completing a doctoral degree in Fine Art. Cader’s present sharing of work demonstrates his ongoing engagement with art production in Pakistan. And it opens up a dialogue, pioneered more recently by artist and curator Naazish Ata-ullah. In 2008, Ata-Ullah curated a survey show for PNCA (Pakistan National Council of the Arts, Islamabad), entitled ‘Re-forming Landscape’. It brought to the fore a community of contemporary practitioners and a genre otherwise considered passé here. Muhanned Cader’s exhibition may further catalyze this discourse. For narrativizing space, lived space, remains a vital concern. And interrogations of landscape have much, as yet, to yield within the region.

Maha Malik is a freelance writer based in Karachi.

[ii] From text by Sharmini Pereira, based on her conversation with Muhanned Cader. Published with exhibition “MumbaiMutai”, Saskia Fernando Gallery, 2010.