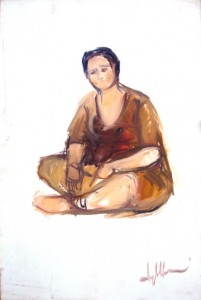 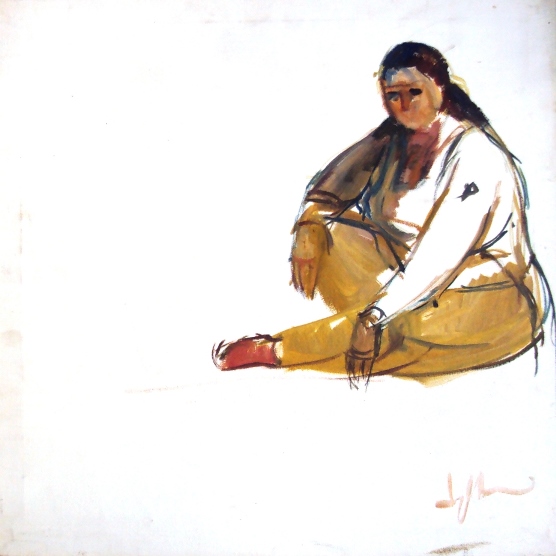 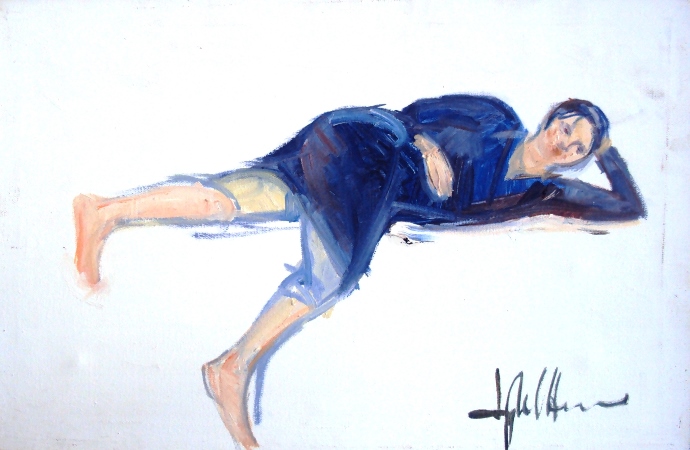 Iqbal Hussain was back in Islamabad for its third exhibition at Tanzara Gallery. Noshi Qadir, owner and director of the gallery, presented some of the latest works by the established Lahore-based artist, including both his most popular subjects, portraits of the women of Heera Mandi, the “Diamond Market”, the ill-famed district and bazaar located in the heart of the Old City, and landscapes from the Ravi River.

Iqbal Hussain has often been compared with the French Impressionist Henri de Toulouse-Lautrec. As was the practice of that late 19th century French artist, Mr. Hussain loves to paint en plein air by the Ravi, describing the every day life of the river. And, like Toulouse–Lautrec, his art depicts the fascinating and mysterious, but at the same time dark and squalid night world, made of dancing girls, forgotten children and cold and bare environments.

In the Mughal era, Heera Mandi was a cultural centre where women performed traditional and classical dances, but the once very popular ‘nautch girls’, loved by the emperors, have over the centuries been gradually downgraded and marginalized. Iqbal Hussain depicts the descendants of those Heera Mandi women and the neighbourhood where he grew up. In fact, the source of his inspiration and main theme of his works are intimately connected with personal experience: his mother, aunts and sister were in that business.

The so-called Pakistani Toulouse-Lautrec started painting randomly and almost by chance, entered the prestigious National College of Art in Lahore, where he also taught afterwards for some years. Painting acted as a cathartic instrument that paved his way to personal redemption, allowing him to channel his energies and sensitivities towards art.

He also transformed the old Haveli where he spent his childhood into a renowned gallery and chic restaurant with an outstanding view on the nearby Badshahi Mosque, making Cooco’s Den one of Lahore’s contemporary landmarks. His creative restoration inspired many other local landowners and prompted the saving of a number of other ancient structures in the Old City.

His female figures are sometimes young and attractive, other times seasoned and resigned. They are often portrayed in simple, everyday gestures: resting, combing their hair, sometimes alone, and sometimes chatting. In some cases they are tied one to the other like slaves to a chain. The models change but the subject is always the same. Every painting tells a different story in the controversial and often ignored world of Heera Mandi.

Iqbal Hussain is an ‘insider’. He knows how things go for the community. Once in a while, in rare self-portraits, he appears amongst his models, reflected in a mirror or even in an informal attitude with them. The result of his special connection with Lahore’s underworld is revealed through a very powerful brush stroke. Quick and incisive, his drawing is very expressionist. Iqbal Hussain has the ability to show on his canvases thin ambiances and complex inner feelings through sketches that seem almost unfinished. But sometimes his fast brush stops and lingers on minute details on the face or part of the body of his model, reaching a Renaissance-style clarity.

With time his brush has acquired a lighter and faster touch, moving from crowded and detailed scenes such as the Dowry series where the bridal patrimony is minutely portrayed or the Old City havelis depicted with ultimate precision, to recent minimalistic works.

His barely sketched characters emerge from whitewashed canvases almost as morning thoughts, or faded memories. This current approach makes his works look more up-to-date, even if – quite obviously – Iqbal Hussain’s goal is not to explore new territories in order to ’be trendy’, nor compromise with the expectations of the international art market. He is not even trying to please the local establishment, as the subjects of his works remain controversial and non-aligned.

Iqbal Hussain keeps telling stories to which no one seems to want to listen, but in which everybody ends up intrigued. He has the poetry of a traditional storyteller combined with the sharpness of a contemporary reporter. Iqbal Hussain’s paintings narrate a vanishing reality, a fascinating piece of that complex mosaic that is Lahore and Pakistan.

Lavinia Filippi is an art critic, curator and writer based in Pakistan and Italy. She has worked for international art galleries and museums and is a writer and anchor for Italian National Television (RAI)