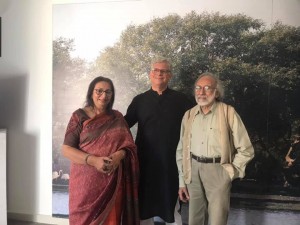 The concept of nature in self claims that after spending the majority of our lives around nature in the evolutionary history of mankind, humans have developed an innate need to be around natural surroundings and to affiliate with other life such as plants and animals. Exposure to nature has proven to improve our emotional well-being by promoting pro social behavior and ensuring a healthy society. Karachi, a place that has beautiful forests and landscapes, has blessed its people with the opportunity of being around nature. However, the sad truth is that in an industrial city like Karachi, nature tends to get overlooked.

Noise, a big crowd and pollution are some of the words frequently associated with Karachi, and in such a city, the chances of finding breathing space for wildlife are thin and almost nonexistent. Having built its economy around numerous factories and depending solely on commercial production, Karachi has succeeded in neglecting nature to an extent that expanding monetary development seems to be the only priority even if that means compromising natural resources. This increasing threat of environmental degradation is extensively studied by Pakistani artist, photographer and cinematographer, Tariq Alexander Qaiser, who began exploring the forests of Karachi in 2009. After looking at them closely for ten years, he put forward his work at Canvas Gallery in his exhibition, titled ‘The Edge of Delta’.

Qaiser has had a close connection with parts of Karachi that people normally fail to notice and appreciate. Due to this reason, he feels the need of capturing the true essence of these forests, specifically around Bundal Island and Korangi Creek, and showing these images to the public to make them aware of their surroundings. He says, “I want to share these amazing sights and experiences with others and record a part of our city that is concealed and not very accessible. I do this in the hope that they are retained for future generations. I want to leave behind a trace, a memory of what the mangroves once used to be.” It almost seems as if Qaiser documents wildlife to give back to the planet. Being unable to preserve the environment alone, preserving them in the form of a picture is the most an individual is able to do. “These images – both still and moving – are presented in the hopes that perhaps we would be moved to ask for a maintained nature reserve for and within Karachi,” he adds.

This exhibition consists of very aesthetically pleasing photographs that create a very satisfying feeling amongst the viewers. His works like ‘Flamingo’ and ‘Just Fledglings’ portray several attractive birds flying or resting together, bringing out a very warm feeling. He displays these works by stating, “here are stories of decay that need to be told.” It is ironic how he uses these colorful and appealing pictures to tell ‘stories of decay’, instead of using gruesome images to represent melancholy and regret. Perhaps, he is targeting our love for the beauty of nature to make us protect it instead of showing us the truth.

The rapid growth in population leading to massive deforestation is detrimental to our city, its people and the sea. The mangroves surrounding the Indus Delta used to cover an approximate area of 260,000 hectares till early 1980’s, and in 1990, the area dropped drastically to 160,000 hectares. Qaiser talks about this loss of trees in his series called ‘The Tree No More’, where he explores the importance of mangroves. Mangrove forests are not only home to a large variety of fish but they provide coastal protection without which a sea level rise would cause an increase in coastal erosion. They are considered to be the roots of the sea and losing them would mean losing sea life. People living near the delta would be affected just as severely since they depend on an estimated 18,000 tons of mangrove firewood each year.

It is quite paradoxical how an industrial city like Karachi focuses on expanding its economy but disregards the importance of the tourism industry in achieving the same goal. Places like Bundal Island hold a lot of scenic beauty and if they were preserved and maintained, tourism in Karachi would prosper to a great amount which would increase our foreign exchange earnings, rate of employment and could lead to infrastructure development. Tourism might even help Pakistan improve its relationship with other countries and better its public image internationally.

One may wonder if environmental degradation is purely a natural process leading to the inevitable end of the universe or if human beings are to blame. If it is, in fact, a natural process then is there hope for the planet? There possibly are no right answers to these questions but that does not alter the fact that spreading awareness is crucial and must not cease. Qaiser’s attempt at calling our attention to marine life and giving us a chance to experience these ecosystems through his eyes can surely be respected. His passion and love for the environment is visible through his photographs, short films and his words as he exposes the hidden forests of Karachi. His deep affection and longing to save the trees can be felt in this simple sentence when he says, “telling these wonderful stories is important because all is still not lost.”