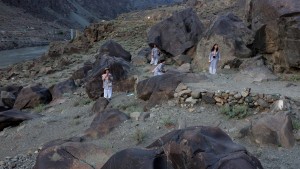 Biennials of the Periphery

Despite the turbulent history of the country and an image of terror and violence, various institutions in Pakistan attempt to portray a softer image of the country, be it through Literary festivals being hosted each year, international cricket being played in the country or by efforts to promote tourism. Nearly after three decades since the first biennale that was held in 1987, Pakistan also joins the bandwagon of hosting biennales, in not just one but in two cities. Lahore Biennale Foundation and Karachi Biennale Trust have organized three Biennials to date. This year, Lahore Biennale 2020 is all set to exhibit in Lahore in from January 26th till February 29th. “Between The Sun and The Moon”, Darmayan e Shams o Qamar is curated Sheikha Hoor Al-Qasimi, founder of Sharjah Art Foundation and an eminent curator from the UAE. Therefore, at this juncture, it is worth revisiting the past to investigate and explore how the biennales have exhibited in the past and expanded to the South and in postcolonial countries including Pakistan.

While Biennials may seem promising with the aim of promoting artists, contemporary debates and artworks, there still exists institutional problems within the structure of the Biennials. Thus, this essay is an investigation of how the Biennials have evolved and try to question and critique the hegemonic system of the organization, and how the artists as the most significant component of the Biennials, tried to resist and protest the societal problems. It is also pertinent to revisit the Biennials of periphery and of the third world countries, including the southern region and how these events have interrogated and commented on the social systems of the country. These events also served as emancipation of dominance of the social order, authoritarianism and stringent government policies. Therefore, in order to reflect on these grounds, it is imperative to first delve into the genealogy of biennials before approaching the nuanced debates related to their complex structures.

In 1893 the Venice City Council in Italy took a decision to create a biennial exhibition that highlights the significance of Italian Art to celebrate the silver anniversary of the Italian King Umberto I and Margherita of Savoy. Therefore, in 1895 the first ever Biennale was held in Venice, Italy as the International Exhibition of Art to promote the most noble activities of modern spirit without distinction of country. After being inaugurated by the Italian King and Queen, the exhibition had over 220,000 visitors. However, the biennials root their display and formation in the creation of World Fairs, which aimed to promote the elevated economic status of the British Empire in an age of technological advancements and Industrialization.

The Venice Biennale became an international art exhibition in order to its bolster its national identity and affirm its place as a sovereign and powerful nation around the world. In 1906 the concept of National Pavilions was introduced and by 1914 European counties like Hungary, Germany, and Great Britain, France and Russia had their own permanent national pavilions. The Biennale was to be held every other year, with the exception of the years in which the World Wars took place. Before World War I, the biennale served as an exhibition based on the World Fair structure, but it needed to evolve in both content and context, therefore at the end of World War II, after more than fifty years since its foundation, the Biennale had to find a cultural role in order to reintegrate itself into the international art scene.

The change in its aims and agenda meant Venice Biennale became a platform and a system that presented a history of the institution in connection with art in society. Rather than mere aesthetic value artworks were meant to communicate new concerns and ideas that defined the age and culture to which they belonged. Artists were were ready to adapt to these changes and acknowledge the frictions and fractures of their society in their works. For Hooks, “in a democratic society art should be the location where everyone can witness the joy, pleasure, and power that merges when there is freedom of expression, even when a work created evokes pain, outrage, sorrow or shame.’ (Hooks, 1996, p. 138). Conceived as “an entity in time”, the Biennale was able to adapt itself to political and social changes without ever losing the spirit of its institutional identity.

As the Venice Biennale was expanding by adding various pavilions and diverse medium of contemporary artworks, countries started hosting their own biennales. From 1984 fifteen international biennials have been established including Istanbul (1987), Lyon (1992), Santa Fe (1995), Kwan Ju (1995), Johannesburg (1995), Shanghai (1996), Berlin (1996), Montreal (1998) to name a few. The expansion of biennials into African, South Asia, Asian Pacific region mark a significant point in history, finally the center-periphery finally began to be questioned and the hegemony of colonial powers became a subject of critique. These tectonic shifts in power have been central for the globalized contemporary artworld. Biennales began curated on various significant themes and issues, that highlighted the importance of peripheries including the South. Hoskote comments on the establishment the non-western biennales and how they have evolved as biennales of resistance by writing:

“All of the manifestations of the biennials of resistance that I have enumerated here articulate what we may term the emergence of a global South, a network of sites of cultural production sharing common questions, themes, and, indeed, a common precariousness. Observe that these platforms take their stand on the ground of newly evolving regionalities – whether mobilized under the sign of Latin American and Caribbean solidarity, of Afro-Asian unity, of a post–Cold War position of Asia-Pacific solidarity, or of an emancipatory politics that has transcended long-standing antagonisms, as in post-apartheid South Africa. All these experiments, as well as the biennials of resistance that continue to extend themselves despite prevailing constraints, mark a cumulative counterpoint to the Venice Biennial as the universal template for the biennial as form and medium. Their existence demonstrates that there is a substantial non- and perhaps even counter Venetian history of the biennial form that has yet to be narrated.” (Hoskote 2010: 312)

Post World War II when many nations were emerging as postcolonial states, a number of biennials, which included the Alexandria Biennial (1955), Triennale-India (1968), Havana Biennial (1983), Cairo Biennial (1984) and Istanbul Biennial (1987), tried to locate themselves between the two models including a postcolonial version of the Venetian model and an anticolonial model that instrumentalized ‘nonwestern’ art traditions in the name of identity politics. In Africa, the Johannesburg Biennale (1995) was established in the wake of Apartheid.

Oliver’s Merchart rightly argues that biennials can be called ‘hegemonic machines’ because they link the local to the global within the field of symbolic struggles for legitimation and because they mediate the local, national and transnational. However, according to Terry Smith, the global spread of biennials has contested the hegemony of various Euro-American art producing centers, such as London, Paris and New York markets, not only as art markets but as sites that produce art. Biennials have played a vital role in that shift since the 1990s, they have been essential components for one of the major currents in contemporary art. Terry Smith characterize this current as “postcolonial” or “global” art, but he calls the art of transnational transitionality (Smith, 2011). Therefore, transnational transnationality now supersedes postcolonial narratives of the biennales and connects the biennials in a global, lucid and diverse network.

By analyzing the context of the Lahore Biennale 02, both the sites of display and the works of artist such as Wael Shawky, Anwer Saeed and Rasheed Araeen to name just a few, one can say that the normalization of major art events in countries and states such as Pakistan, where government issues and policies have become problematic for the local citizens. Furthermore, certain artworks could criticize social institutions and politics that is not only geographically restricted to a particular location like Pakistan but instead can be applied to other contexts and in different geographical locations. Therefore, at such events like Lahore Biennale, the artworks become transnational and challenge the suppositions of the viewer/spectator as they can be understood in multiple contexts while challenging the traditions.

Biennales have evolved both structurally and contextually over time. As a structure they offer alternative ways of seeing in terms of experimentation with space, display, selection of artists etc. This fresh perspective has meant that boundaries can be contested and existing systems of cultural production can also be challenged with time. As a result, other significant international art events such as triennials and Documenta etc. have come to the forefront and have begun questioning the structural hegemony of the West by incorporating and involving culturally diverse curators and artists who aim to present nuanced issues in a broader sense that present shared experiences as collective histories that inform the past and present of geographic regions rather than merely forwarding or representing national agendas.