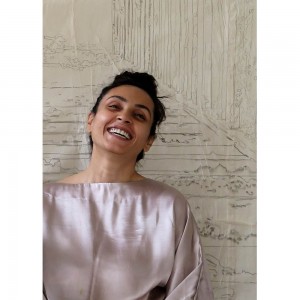 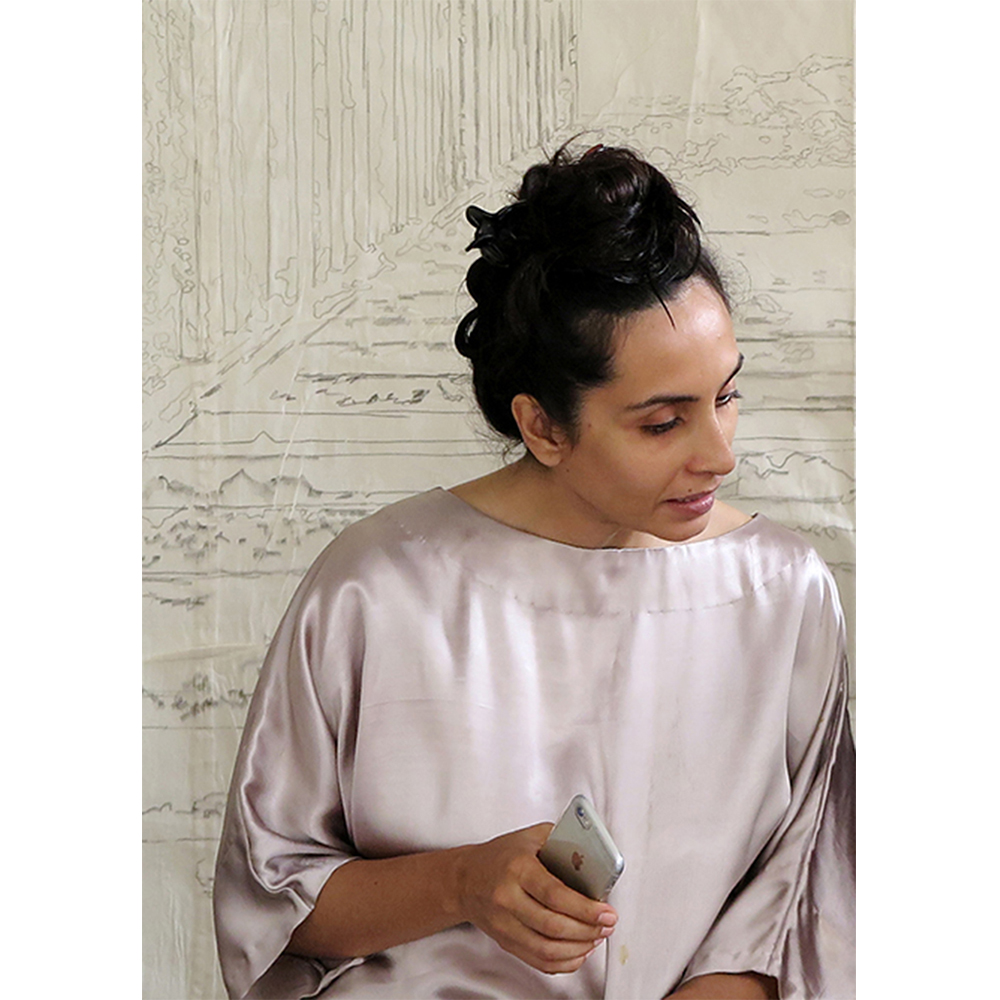 She was her own woman; radiant, intelligent and graceful.
We seldom look at it this way, but being prepared for ones’ own death is a blessing. Her closest friends shared that she knew about the exact time she had in this world and was extremely well-prepared to depart – a privilege and realization very few have. At 42, she took care of and settled all her personal and professional commitments beautifully. Although the art fraternity knew of her cancer diagnoses, her death news on August 13, 2017 left everyone in utmost grief and discomfort.

Sheikh was a founding member of the field of art education in Pakistan. She had tremendous qualities and strengths as an art educator and practitioner. Her death is a huge gap in the country’s limited asset of highly qualified professionals in art and design academia.

Very few people are as dynamic as her; she was a visual artist, writer, researcher, art academic, administrator and a mother. Sheikh did her B.A. in English Literature & Psychology from Kinnaird College, a BFA from the National College of Arts (NCA), Lahore, Pakistan and an EdM from Teachers College, Columbia University, New York, New York. She had been teaching and practicing in Karachi, Pakistan, since 2013 as an Associate Professor and was also the Head of Liberal Arts Programme at the Indus Valley School of Art and Architecture (IVS), Karachi till last year. Sheikh had been part of several group shows, nationally and internationally. She was selected for Koumaria New Media Art Residency, Medea Electronique, Sparta, and was also part of two art residency programs; Khoj Kolkota International Artists’ Workshop, Kolkata and Vasl International Artists’ Residency, Gadani.

Salima Hashmi says that Art Education at the School of Visual Arts and Design, Beaconhouse National University (SVAD-BNU) did not exist as a Program until Saira Sheikh returned to Lahore in 2010 and joined the University as an Assistant Professor after her Graduate Degree from Teachers College, Columbia University. She participated regularly in the summer art education workshops at SVAD-BNU in 2008-2009. These workshops were a run up to the MA in Art Education at Campus.

After her undergraduate degree, Sheikh worked with Hashmi at Rohtas 2 as the Curator and Gallery Manager. Hashmi recalls, “Saira’s contribution to my life was critical – she helped me classify my slides, lectures and papers, accumulated after 30 years of teaching. All the while we talked incessantly about women’s lives’ constraints, compulsions, compromises. It was a time of great personal upheaval, which she faced with determination and courage. She also had her first solo, Up Close and Personal, at Rohtas 2 at that time (2004). It was a sellout!”. She joined BNU as a Lecturer and Academic Coordinator in 2004 and continued in that role until she got the Fulbright Scholarship in 2007. “I still remember when her letter for the Fulbright award arrived at my address. She was in India at the Khoj residency; the joy of breaking the news was mine”, Hashmi shares.

Sheikh held her head high and maintained her grace despite her life’s peeks and valleys. We both shared four academic institutions – NCA, IVS, BNU and TC, Columbia University, at different times of our lives, but I never got the privilege to work with her. I missed her by a year or two, at a particular place, every time. We met, at length, only when I visited the Art Education Program at BNU and was charmed by her poise, wisdom and candor. I also met her son Sikandar then, a young, charming and confident boy. Together, they made a whole world.

In a recent conversation with Rashid Rana, he spoke volumes of Sheiks courage, ambition and intellect. She was one of the founding faculty members of the only Program of Art Education in the country, he stated. Rana had known her for many years, first in the capacity of a student at NCA and later, a colleague at BNU. Her first memory of Sheikh was through her writing – a reflection paper for his Contemporary Art Seminar course in 2000 that outshined the rest.

Throughout my conversation with Rana about her, he extensively referenced Sheikh’s project, Mirror Mirror On the Wall, at Rohtas 2 Lahore in 2012. It was performance-based work, which he considered as his most memorable and groundbreaking project of the time. He said that, typically, in the present era, the art world functions through the art market. “Visibility, publicity and virality being key factors to access ideas and art practices. In this rut, oftentimes, some unconventional and innovative practices, unfortunately, do not get the recognition and appreciation they genuinely deserve, because they are not being supplemented with numbers, trademarks, repetition, crass marketing or excessive branding. Rana believes that this project (that not many people are familiar with) was way significant than many series of works by other artists of that time. “I think people mostly don’t understand the politico-critical aspect of the Rohtas work”, Rana candidly shared Sheikh’s reply in a recent conversation they had about her work before she died.

Mirror Mirror On the Wall, according to Rana, is work that “questions the idea of a maker; where the artist is not making anything, and instead, the viewers become the makers. In fact, this particular work questions all notions of making; the subject, maker, spectator and the gaze. Everything turns upside down.”

Her recent body of work, in Karachi, was in collaboration with Omer Wasim, a prolific and interdisciplinary practitioner and her colleague at IVS. They had their first solo show, 24.8615 N 067.0099 E, at Canvas Gallery, Karachi in 2016 and, since then, have worked prolifically on many projects. They were also part of a group show, Artist Statement at CICA Museum, Gimpo, South Korea the same year. Their second solo, Optics of Labour, was held at Koel Gallery in April, 2017. They showed their work at the Cairo Video Festival and were lately working together for a solo at the IVS Gallery for Drawing Documents. The show, Wasim says, will take place this Fall.

They practiced together to investigate contemporary art practices in context to the recent interest of the west in the region. Their work primarily aimed to revisit and challenge the established, traditional ways of artistic engagement and art making. Instead of “depoliticising or aestheticising politics, their practice attempted to “politicise aesthetics”. In the artists’ own words, their work sought to “debunk and unpack (self-) colonising modes of knowledge construction and circulation by embracing contradictions as central to making and thinking. Our projects include fictional and factual readings of collected and constructed images and objects; in order to witness, challenge, and disrupt unitary or binary readings of human ecologies, consumption, value, and labour… We, as artists, are not mere participatory observers, or witnesses, but are also responsible for generating, circulating, and perpetuating these hegemonic systems of constructing knowledge and histories.” (Wasim & Sheikh 2016).

Recently, Sheikh and Waseem were part of Koel Gallery’s anniversary show, Taqseem for which they produced Studies for a Failed Monument to illuminate “the nation-state’s fallacious belief that it could continuously mine the land and the ocean, and impose its whim and will, even further, on all ecosystems, without any repercussions”.

An extra-ordinary woman – Sheikh touched many lives deeply. “Despite her struggles, she never gave up or looked back”, “a beautiful girl with a heart of gold”, “brave”, “a courageous single parent”, “resilient”, “extremely hard working”, “driven” “affectionate and gentle” – I heard almost all her friends say this repeatedly about her. Dr. John Baldaccino, her professor at Columbia University shared that he “will always remember her for her insight, love of life, her brilliance as a miniature artist, and her endeavor to succeed. [The] news of her premature passing is devastating to all of those who knew and cherished her.”

Sheikh leaves behind her beloved teenage son, Sikandar, her mother, her husband, Taimoor, many friends (personal and professional), and prized memories of a lifetime. She will be valued immensely for her profundity, her sincerity of ideas, her ability to see differently, her determination to contribute and her love for life.