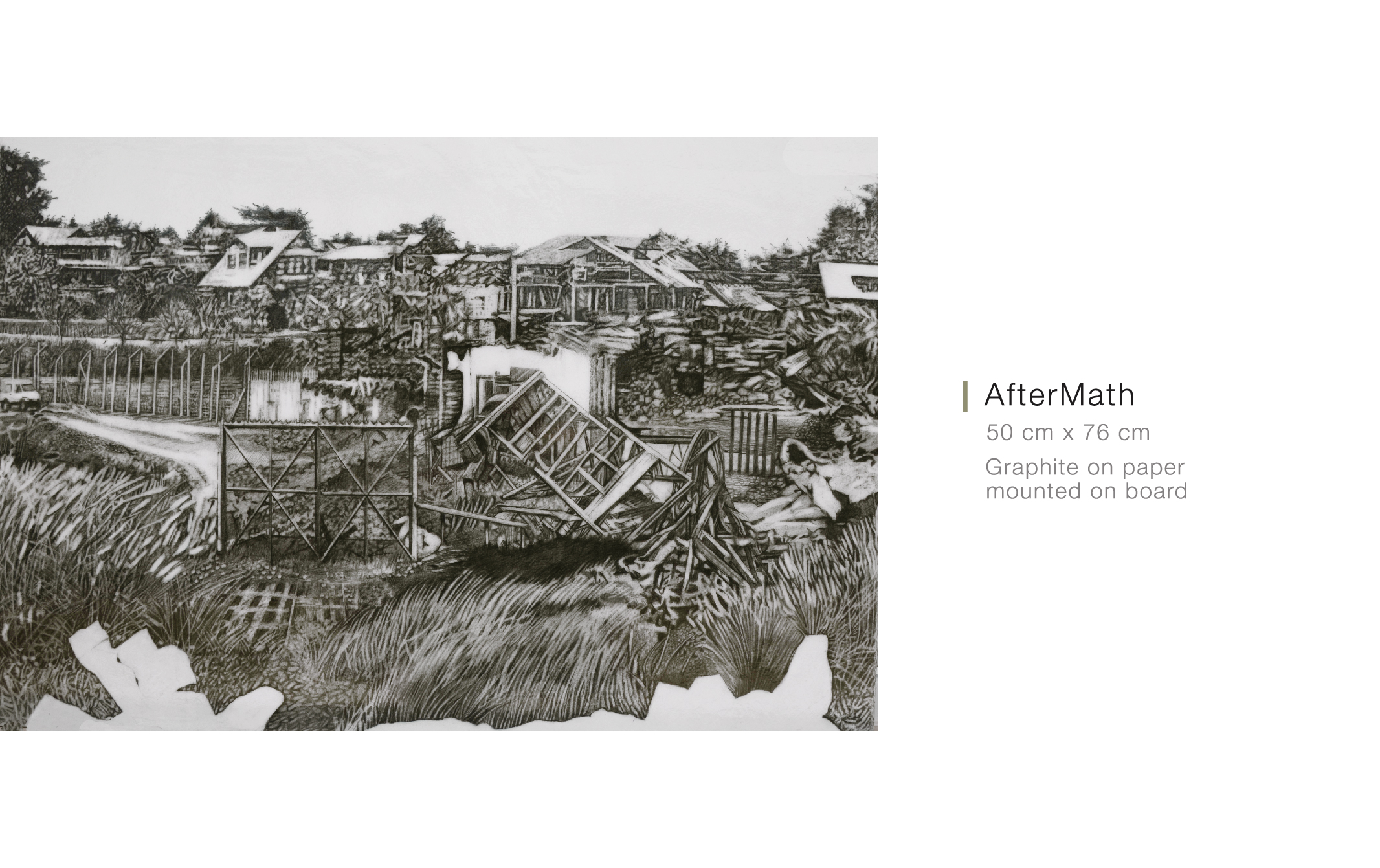 Retracing the Lines of Control. And beyond.

While our history textbooks rigorously inform us of the political and the economic consequences of the 1947 partition – something that is already handed the visibility and the gravitas – and instil a nationalistic sentiment that unyokes the human kind in an ‘us’ and ‘them’, they deviously avoid mentioning any repercussions of the separation on the most basic level; one that narrates the human emotions – the sentiments of the common beings – once they are stripped of their inherited identity. This facet is unfortunately more subdued, clasped down and not given the weight it rightfully demands. Moreover, a discourse on the expansive effects that the break-up has had on the land is purposely eluded – when in reality the living, the breathing, the suffering terrain was left bruised with a single stroke brutally incised along its vast body.

Renowned artist, Saba Qizilbash is cognizant of these visceral ramifications and opines how one should be intrinsically compassionate to the rather personal outcomes derived from our history. ‘By Land’ exhibits the artist’s recent body of work at the Koel Gallery and narrates the humanitarian effects of the partition on either sides of the border. The concomitant displacement in the sense of being, of identity, and of community unfortunately still lingers and has yet to be officially addressed.

Saba Qizilbash currently resides and works from Dubai, and is conjugated to Kashmir, India through her husband. This gives the artist several opportunities upon every visit to experience life as a settler from both sides that lead up to the border – she can become herself and see her reflection, and she can also reincarnate as her reflection and see herself. Moreover, being stationed in the Gulf lets her step out of her conscious identity, and exit the stage to objectively view the scenario. Her thoughts on this personal subject have grown holistic and sympathetic. Her work often sources its inspiration from either personal life-events set in a domestic premise, or from the socio-political grievances that affect her individually – as a woman, as a mother, and as a South Asian.

Having held a deep fascination with garments, Qizilbash has extensively worked with them in sculptures and drawings to dissect their performative nature. She views clothing as quintessential uniforms and questions the semiotics embedded within. For this series as well, she picks up on used apparel to not just focus on their narratives – the lived and witnessed history – but to creatively fictionalize a few on her own. The artist realizes the articles of clothing as human portraits; they flood the visuals in the gallery and fill the atmosphere with a sense of active human presence despite there being no visibility of their recognizable physique.

The ‘Submerged’ series presents the garb as defiant individual biographies. Creased, soaked, stained, and severely worn out, these clothes are exhausted and short of breath and yet attempt to orate their story. Drenched in mud, they have been convoluted and strangled to the point that they appear to have lost their own identity in their tangled folds – possibly waived in an exchange for survival.

In fact, in ‘Cultures’ Qizilbash equates the garments to a form of second skin. She makes minute drawings of various forms of clothing on mylar that she previously applied flesh toned washes on. The artist astutely displays the transparent drawings in tiny petri dishes as cultures, ready to be examined. For her the work itself is a microscopic investigation. These identities retell their individual as well as shared history, ridden with apparent hues of blood that Qizilbash incorporates to commemorate their tangible as well as intangible loss. After all, stomping on the human souls, and dissevering their emotional connection to the land as well as to others engenders a deviant kind of martyrdom that is not acknowledged. The artist pays homage to that loss by assembling a sort of memorial, which the viewers saunter by in silent contemplation. The limpid visuals leave the identities completely exposed. They have no shame, no fear, nothing further to lose in recounting it all.

Erasure and decay is thematically integral in Qizilbash’ works as most of the visuals are treated with soil-like washes which along with the desolate settings suggest a slow petrification of the unkempt constructions. Her drawings, in essence, are a nostalgic documentation of what is now abandoned and unspoken of. The emotive and relatively grim drawings capture the geography nearing the country’s borders which in some pieces is used as a backdrop for painfully taut garments that the artist places as if they were thrown aside. The stretched and wrung clothes seem uncomfortable, out of place, and alienated from their surroundings.

Having studied and lived abroad, Qizilbash recalls how she was scrutinized for being a person of colour – an experience that many people of South Asian descent can relate to in pertinent times of today. Interestingly where we have divided ourselves in two separate identities, the Occident melds us back and views us as one. This amusing phenomenon led the artist to explore the symbiotic between this biramous relationship. The idea of surveillance is evident in her drawings and manifests itself in the form of watch towers, barbed wires, and enclosed gates. Qizilbash draws the absorbing comparison on how we surveil each other and safeguard our borders to monitor any interaction and assimilation, and how the same is practiced by the west with us on their territorial parameters. The drawings inevitably thread this idea to time and history as such regulations are not a recent happening but have existed since decades; An established apogee, the division of the sub-continent in 1947 and the immediate years that followed serve a paragon from the South Asian history.

The ghost towns are immersed in a silent mess that look back to the halcyon days when life was a lot calmer. The context obscured, these natural landscapes dispute with the invasive manmade structures to create a dichotomic chaos, disrupting the view for an onlooker. The viewer is left puzzled as to whether the depicted is a dystopian past, present, or a near future. While in some pieces the bridges attempt to connect the disparate and the disjointed bodies, in others the restrictive fences, railroad gates and other traffic-barring devices allude to a deliberately forceful shepherding of human emotions, beliefs, and relationships. The recurrence of roads, railway tracks, and stations with no end in sight denote the perpetual journey the land and its inhabitants have to subsequently undergo. It is also a poetic reminder, a personal rumination of Qizilbash’ that her artistic praxis is a disoriented journey in itself – something that cannot be traced or mapped from before, but must be allowed to submerge you in entirely to even move forth.