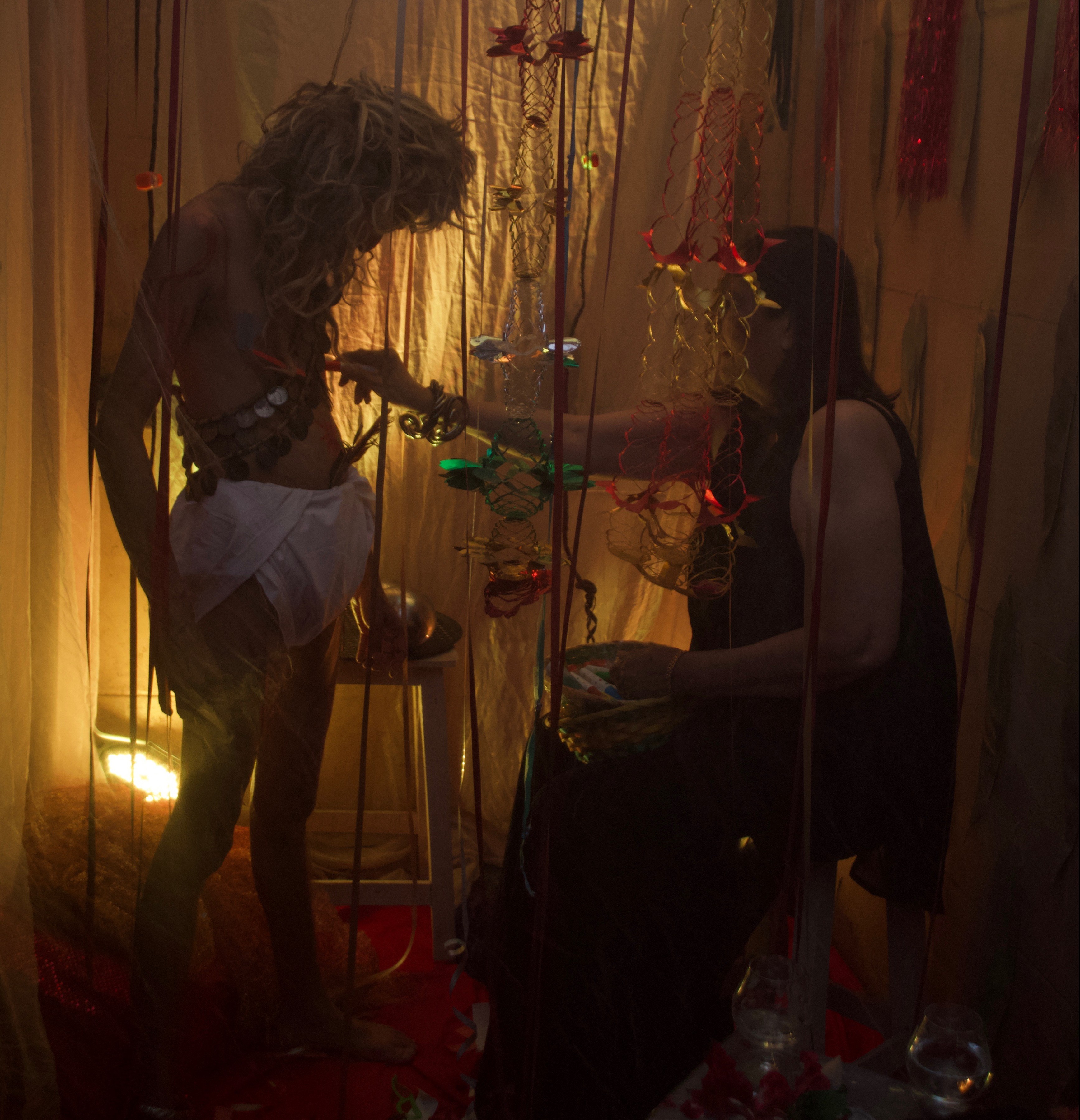 Red on the Spectrum

Does red magic exist in cultural settings where insidious black magic or “kala jadoo” is often talked about? Essentially, the idea of magic or voodoo in a respective cultural setting entails supernatural entities, dark rituals, and unholy rites. Metaphorically though, anything magical can enrapture us and punch life through our senses. For instance, a beautifully composed bit of music sends shivers down our ears. A masterpiece of art is visually stirring. Flavorful food brings delight to our taste buds. You would think of a performance art show titled Lal Jadoo (Red Magic), to pertain to non-existent trajectories and ideas. Lal Jadoo however, is all things read between the lines. Subtle yet fiery, chaotic yet civil, explosive yet prudent. So, is there anything such as the unfamiliar and novel red magic? In many performance pieces curated by the multi-faceted artists Amin Gulgee and Sara Pagganwala, yes, there is!

Lal Jadoo a.k.a. Red Magic was held at Karachi House on March 15th as a part of the annual IPAF 2020 that was hosted by the arts organization “I Am Karachi”. More than sixty artists participated in a show that was unique; the works were streamed live and online in lieu of in-person viewing due to measures taken against the spread of the COVID-19. The show composed of various performance pieces, some photographs, videos, sound, and animation clips where artists invited spectators to take visual pleasure in routines that depicted subtleties of our empirical experience. Disseminated throughout the corridors and the driveway of the building, the performances channeled a surreal spirit. Physically aiming to involve all five senses, the energies from the many acts brought the viewers’ attention to many realities (and taboos) that exist silent yet known among us. The show is inevitably about the human condition: cultural dogmas, social gender constructs, love, violence, language, beauty, conflict, and the body.

Performance art is still a relatively recent development in the Pakistani art scene. Globally, the genre developed in the sixties with cutting edge and radical performances by artists such as American artist Carolee Schneemann and Japanese multi-media artist Yoko Ono. Performance art was then radically furthered into popularity by Serbian-born artist Marina Abramovic whose following words have been an inspiration for the show’s curatorial concept.

We are always in the space in-between…all the spaces where you are not actually at home. You haven’t arrived yet…This is where our mind is the most open. We are alert, we are sensitive, and destiny can happen. We do not have any barriers and we are vulnerable. Vulnerability is important. It means we are completely alive, and this is an extremely important space.[1]

A piece of performance art can range anywhere from being scripted and rehearsed to entirely arbitrary. Performances can be short, long, mellow or provocative. Gulgee and Pagganwala are also performing artists whose performing works have been conducted in various biennials and exhibitions in Pakistan and abroad respectively.

Why red? Red is the color of vigor, wrath, lust, and dominance. In Lal Jadoo, the red is the grey area between the black and the white that curators and contributing artists rediscover and conceptually explore as the “space in between”. This space implies ideas and realities from our everyday lives where derived meaning, causes, and effects go beyond the apparent and visible. Consider male performer Jamal Ashiquain and female artist Shakira Masood’s performance, The Spell. Semi naked, Ashiquain acts as if under a spell as Masood’s fetish doll, as their performance reverses socially constructed gender affiliations. For her performance Blind Date, Artist Noor Ahmed spent a month interacting with strangers before acting her final piece. The artist associates deeper meanings with mundane objects as through her performance, they transform into memories themselves.

What may a show like Lal Jadoo that propels experimentation while revealing dreamlike sequences mean for Pakistan’s contemporary art scene? In the light of our artistic advancements in the past few years, performance art will see a surge as observers and critics can expect fresher voices homogenizing with experienced performers. A synergy such as this can achieve curious results where artists are unafraid to express taboos deeply entrenched in our cultural consciousness. This can also deliver further context to scholars who desire to critically involve with the arts.