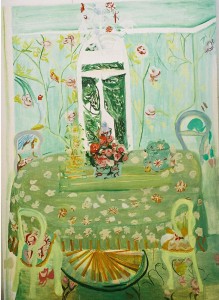 “I found I could say something with colors and shapes that I couldn’t say any other way – things I had no words for”, the recent body of works by Qadir Jhatial and Uzma Sultan displayed at the Koel Gallery, are dripping with the effort of becoming almost abstract. The paint is dramatic forming its own rough interpretation of the real.

The strokes bring out a sense of extreme unplanned behavior. They give the feel that they have been created from memory and explain how the brushstrokes do not always have to be conventional and traditional to bring out a feeling of colour and movement. The concerning interpretation of domestic space belong equally to the oils and to vigorously celebrated melodrama. The works bring out the inner vibrancy of mundane objects or situations. Indeed, the drive of the reds and blues, and the intense feel of colour in both the artists’ works signal us beyond the image’s worn routines of empathy and desire, and toward a better investigation of the peculiar rituals of looking and being looked at, or the manic disconnection between seeming and being. The works laced with vibrancies deals in the parallel between the idea of representations and the reality of the situation, as each art works are skillfully brief gems set against solid colors.

For a better understanding one must read these introductions written about the techniques and conceptual understanding of the artists and their works.

“Painting your own painting allows you to paint your doubt.” This saying casts a different light on Qadir Jhatial’s working process: on how he insistently retains some semblance of representation via drawing, but only while continually playing his painting over, around, and against that drawing –  erasing, occluding, and eclipsing, almost but never entirely, the things he depicts. For all their action and expressivity, in other words, the paintings are not Abstract Expressionist, or even precisely expressionist; neither are they about capturing any emanations of the unconscious. Speaking plainly of recent endeavors to make his painting more concrete, the artist explained that he is interested in painting “nouns” right now: “people, places, and things.” Since Jhatial started the series, the works have unfolded as both “direct” drawing and “memory’ drawings”, although in either case there is an empirical directness: They are observed from life.” – Aasim Akhter

“From the receding interior spaces of the boudoir, shrine or sitting room in Uzma Sultan’s earlier paintings, the flattened and patterned surface has come surging forward in her recent works, painted both in Karachi and as part of a residency at Glogauair in Berlin. Including stacks of Tibet powder and cooking oil tins, a crowd of painted vehicles, and a multiplied bed of charpoys viewed from an impossibly high angle, these paintings are rendered with Sultan’s characteristically crooked figuration. In the last case, Sultan appropriates the stacked perspective of the early miniature tradition, flattening and tipping the horizontal plane upwards and towards us.

Alternately exaggerating and muting particular colours, the patterned surfaces that Sultan’s paintings represent are vibrant, and yet also rather barren. Most particularly, these paintings reflect the joy of the mark, of pushing colours against each other like unhappy lovers. They reflect the dance of paint on matter, in this case on impervious surfaces such as aluminum, vinyl or perspex. These works flirt with ugliness, with the shaky gesture of the brushstroke, and with the imprecision of an unplanned composition. They demonstrate that painting, in the end, is not only about painting pictures, but about making paintings. About the painful pleasure of paint, colour, surface and form.” – Gemma Sharpe

The artists paint in thick oil and acrylic; their technique follows a simple method in essence and applies undulated colors that add photographic hint and element. The pop content and feel of the painting thereby feels custom-made. By creating sharp contrasts in light and dark that feel like flashes, the artist only heighten the dramatic effect of the painting adding to their stories.

Works by Uzma Sultan and Qadir Jhatial were exhibited at Koel Gallery, Karachi, from 30 April to 11 May 2015. Images courtesy Koel Gallery.

Marium Kamal is an Indus Valley Graduate currently working as a designer for Sheep. She is a contributor to the online magazine, The Karachi Voice.