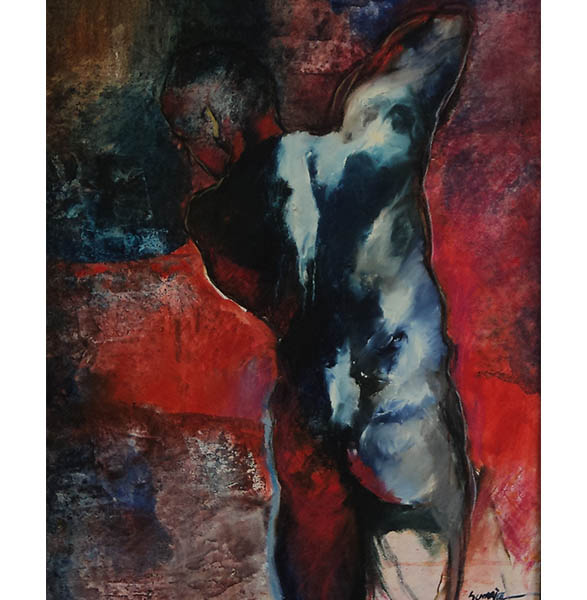 In recent decades artists have progressively expanded the boundaries of art in efforts to engage with an increasingly pluralistic environment. The mak

In recent decades artists have progressively expanded the boundaries of art in efforts to engage with an increasingly pluralistic environment. The making, viewing and the understanding of art and visual culture are no longer anchored in traditional aesthetics but have now become reliant on significant ideas, topics and themes spreading across the mundane to the unordinary, from the self-examining psychoanalysis to the socio-political critiques. Novel executions and experimental techniques which focus more on the materiality and the object stroll alongside the more conventional practice of art – be it in terms of its aesthetics or in its application of ideas. However, all form of art within the current spectrum invite viewers to physically interact or visually engage with them since the metamorphosis of the intangible and abstract to something concrete will always be patented in every work of art.

Artchowk gallery’s recent exhibition “Potpourri XXVI” lays a defying example to this dictum. The show unlike its formally curated expositions is a frequent display of selected artworks from the gallery’s collection. A rendezvous of both fresh and experienced pieces by the emerging talent contemporaneous with those who are well established, it essentially brings together the experimental, the extant traditional and all that is in between. By providing one the privilege to view this continuous evolution of local art sphere from up close and to holistically inspect the freshly born dynamics within, the show in essence presents itself as a microcosm of the coeval art scene.

Societal dichotomies serve a recurrent prism for many of the artworks. It is evident from the collection that artists are truly sensitive towards the depravity they see around as many brave a protest on their unease and inquisitive nature on issues that create hurdles for a society to collectively progress. Tolerance, moral corruption, religio-political hegemony and gender imbalances are few of such genres.

For instance, Deena Maher makes adept use of prayer beads by constructing a curtain to portray a congregation of men in prostration. The assembled columns of rosary beads echo the rows of the praying men. The continuous threading of the beads further generates a sense of repetitive motions. The body cyclically performs these chant-like recitals accepted as obligatory; however, the soul is veiled and inactive during these rituals- increasingly void of any human investment and emotional dedication.

The ostensibly distraught and disturbed portraits in Arsalan Naqvi’s paintings raise an alarming sense of anxiety. Superimposed on newspaper clippings and various headlines, the translucent faces permit the text underneath to surface. Naqvi epitomizes the present climate where one feels bogged down and perturbed by the ongoing conditions and happenings which the media incessantly broadcasts.

Another prevalent denominator in several works is the profound bond between man and nature. The artists critique the dynamics of this poetic relationship and capture the longstanding romance between the two. They further investigate any changes the environment or humankind endures with time. Reporting on man’s taming of the feral at nature’s expense, Munawar Ali Syed’s sculpture “Overloaded” is a wooden book laid open. The city structure spreads across one page on which coats of azure produce a shift in the image as if it is seen from a moving vehicle. On the mirroring page is a copse – the trees however are carved from pencils. The self-explanatory paradox is unlikely to drift unnoticed. Saba Qayoom presents vast landscapes bathed in thick, tactile strokes which spotlight the nature’s ability to seduce through its beauty. However, a grazed land in the background, a railway track, and a series of pylons confront the violent human interventions in a natural environment. Baring no to minimal active human presence, the various land and seascapes reveal nuances of human activity. Several artists seem to have processed the consequential results of bringing ordered disorder into an otherwise autonomous pattern of nature.

Abdul Hameed depicts dominant edifices leaning on passersby through their narrow alleys. He explores the rapid urbanization within cities and its wavering interaction with its inhabitants. The series “Old Lahore” and “Old Peshawar” contrast the old and new architecture and illustrate the memories of what once was against the present-day reality of a built environment found constantly in flux. Following the same tangent is G N Qazi. The hints of colour in a predominantly monochromatic scheme highlight the structures as a lived space which otherwise come across as ghostly and desolate. Creating hierarchy between the buildings and its residents, the artists place particular emphasis to the differing attitudes to our heritage. They aim to overcome the alienation brought about by modern urban experience and by imagining the forgotten, open a conversation between their own reminiscences and representations of the city with those of the viewer.

The nostalgic sentiments seep into Faheem Baloch’s small scale paintings as well. Presumably of his hometown, the nomadic landscapes lure one in for an intimate viewing of the wanderers who move in pursuit of belonging. The muted contrast and patchwork of colours identify with recollections of his vague memory – he looks back to approach a distant homeland. The earthy complexions of the barren topography exaggerate the sense of abandonment and bleak emptiness. For Adnan Mairaj, his work charts his personal as well as shared past as he stamps locations significant to him on local maps. The vintage maps and the aged surface excavate feelings of nostalgic retrospection. He frames a cropped and zoomed in map to present an incomplete picture – an unfinished journey withstanding time; a journey which perhaps shall be everlasting.

Similar to Mairaj, Asif Ahmed navigates through history of our land and its people. Crossing borders and civilisations, he examines the Mughal era and threads the violent commonalities pervasive even to this modern age. He lays focus on the turbulence during the grandiose empire by overlaying contours of grenades and rifle cartilages on royal portraits. In doing so Ahmed produces a discourse on politics, time and history and inevitably conjugates it to the present. He sews a Mughal profile to a human cranium to render the eventual downfall of an iconic period and its splendour. After all, life is transient and all pinnacles will eventually be flattened.

Death finds common ground in many pieces. The artists symbolize the inevitability of eternal rest and the ephemerality behind earthly achievements and pleasures. They exhort viewers to consider mortality. Human skulls reappear in Muhammad Ismail’s sculptures. Constructed out of welded keys, he plays a visual and literary pun as he shows the ‘key’ to success and strength lies in one’s willpower. Ismail opines one is only handicapped by their own imagination. Perseverance, hope and relentless passion in one’s faith – religious or otherwise – are what according to him supplement the drive to chase ambitions and to pursue life despite all its wound-inflicting hurdles.

Mugheez Riaz too incorporates ominous elements and paints a dupatta clad woman with her eyes and lips sealed. Hastened to her face, an uprooted rose precariously balances while above her a crow in flight absconds with a stolen petal. The duality grants the viewer to extract both the emancipation as well as the contrived mortality in life. Sausan Saulat displays a perceivably lifeless figure wrapped in white cloth with only the colourless feet visible. Staying true to her language, Saulat further blankets the shrouded subject in elaborate motifs borrowed from the fabric she has painted on. Perhaps a critique of herself or a general observation, the image seemingly denotes the consumption of an individual by the power and passion invested in their own opus; allowing themselves to get drowned in its intricacies. The piece is aptly titled “Death of an artist.”

Opting for a deviant trajectory, both Scharjeel Sarfaraz and Naseer Burghri illustrate the male form. The artists – each in his unique way – have shown the nude in a solitary solace. The contemplating figures appear to shy away from the spectator – inhibited and possibly ashamed, the men avoid eye contact. Their vulnerability however is sheltered in the richness of pigments around them. The overpowering opulence from the flamboyant colours juxtaposing the meagerly clothed figures raise concerns regarding not just gender and sexuality but also tethers those to issues of social class.

Colour also performs a vital role for Kiran Shah. Her playful work bears humour and child-like resonance however, the gamut of hues ironically sugar coat the sad state of affairs she reflects on. The colours melt and bleed while the neon text scribbled on glass creates a disconcerting chaos. The wrapped candies against a menacingly dark backdrop remind one of the persuasive temptations of the forbidden fruit. By lightly taking matters of an otherwise morose scenario Shah heightens the gravity of the convulsive situation of our society.

This eclectic culmination of seventy nine artworks by thirty nine artists gathers fresh, accessible and dynamic voices in a harmonious melody – bringing life to the thrilling diversity of both classical and contemporary art. Undeniably uplifting, the euphony from the multitude of voices accompanying the visuals – each comprising of sundry ocular languages – may also leave one temporarily dazed if not overwhelmed. The cornucopia of sculptures, drawings, miniature and large scale paintings in an array of mediums provide access to a plurality of voices and perspectives defining a distinct theme or proclivity. The oeuvres burst a variegation of colour not just physically in the gallery space but also in the impalpable time ahead; splashing the air vibrant with a promising future for our local contemporary art scene.