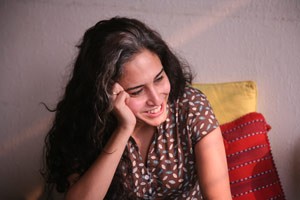 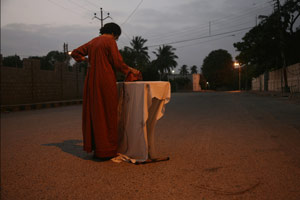 Narratives of the Absurd

Bani Abidi is trained in painting and printmaking at National College of Arts, Lahore, but her interest moved to video while she was pursuing her MFA at the Art Institute of Chicago. The photographic element in her work ensued as a natural consequence of video-making. Bani’s oeuvre is simultaneously witty and sad, giving her works the poignancy that amazes and startles while it narrates. What follows is an interview between Asma Mundrawala and Bani Abidi.

Asma Mundrawala: I’m going to ask you about the narrative content of your work and its performative aspect. I’m interested in discovering why you choose this form of narrative expression and what influences feed into your work.

Bani Abidi: During my undergrad years at the NCA, for the most part, I was painting and it was a very medium-driven interest. Gradually I became more interested in ideas which stood apart from formal issues, and I invested all those into painting. So there was a struggle between following a particular kind of painterly language I was interested in, which was in conflict with the ideas I was interested in. I experimented with that a lot and eventually I felt that I was trying to the push the medium of painting in a direction I could not take it in. During my Master’s degree and my time in Chicago, I had been watching a lot of film, and understood the potential of the moving image and other time-based forms. I started working with video after graduating. I think the reason was that with video as with performance, you can incorporate sound, language, action and time, and you find two or three levels functioning simultaneously on the timeline. And so I felt that the fact that something unravels over time was the way I liked looking at art rather than standing in front of a still image and investing that with a narrative.
AM: Also the tradition of storytelling is so important to our culture. How did you find that to come into your work in an oblique kind of way?
BA: I think it was because I’ve grown up in a home where I found that if we ever tried discussing an image, any image, even if it was a photograph or an early modernist painting like Sadequain’s, it was just shunned under the label of being too ‘modern’ or abstract. There was no desire or ability to understand images intellectually; there was just an expectation of visual beauty. Real enjoyment lay in literature. The contrast was so extreme in the way references were made to poetry and prose in daily conversation but images were only ever spoken about formally. And generally in Pakistan, it is poetry, the ghazals, music or Sufi music, literature and writing that plays a role in the public imagination much more than images of any kind.
AM: This is also evident amongst other things in the text that is written on public transport here.
BA: Yes exactly, that’s much more of an active place full of word play and puns.
Initially when I started in Chicago, it was about being true to language. My concerns were about Urdu and English. Mangoes, my first video mixed Urdu and English as an everyday language. And those things were really important because it was about trying to construct little stories which meant something. So yes definitely, it was as a result of belonging to a literary household. It’s also interesting that after having been through this journey of the narrative, I can now start appreciating the abstraction of an image. Because I have confronted, dealt with, enjoyed and tried to produce full-on stories or moments, there is now a desire within me to be able to pull away and get more abstract.
Mangoes, 2000, Video Still
AM: Yes, your work may have this very strong narrative aspect but yet it is so open to meaning and interpretation that it lends itself to both approaches. For instance your Karachi Series about all these fictitious characters doing various everyday chores outdoors in the evening during Ramadan unravels the duality that you are talking about; the abstractness and the narrative. I think the Karachi Series is a very good example of that.
BA: After having done a lot of video-based work, for the Karachi Series, I invested the same kind of planning and compositional qualities and sense of atmosphere into a photograph. The series differs from the form of photography more prevalent here, which is documentary photography, in the mere fact that they are orchestrated, fictional photos. Therefore a relationship is established to the narrative. I don’t know if one would invest a documented photo of reality with the same level of character and role-playing as is seen in the Karachi Series because there is a very clear artifice in it.
AM: For that matter this is the same for the Muhammad bin Qasim series of works. When I saw you making those works, you were planning the narrative for an excerpt from a television play along with several texts which were to support other works and were written with such aplomb and conviction that it threw the viewer off for a moment. This threshold that your work stands on, between reality and created fiction, is a very exciting place to be in; a place where you orchestrate and direct an entire narrative. This is very different from my experience as a theatre practitioner where I work with somebody else’s text. Here you are making your own text and you are orchestrating the way people will view it.
BA: It’s also about the skill or the inclination one has something which you have done recently, to find texts that you have an intellectual relationship with. I’m able to do this now because I’ve read things that have inspired me. The relationship between theatre and the original text is the very essential relationship between theatre and written text. The role of the visual artist as someone who creates everything him/herself is increasingly being challenged because artists now collaborate, and form collectives and rely on other knowledge bases. But I did feel that the Muhammad bin Qasim works emerged from this entire idea of history and the fact that it is so concocted. You know when you look at the Pakistan Studies books that they are so wrong. So, for me, to write the text that I did wasn’t a big leap, because we’ve grown up on untruthful texts and have believed them. It was just an exaggeration of a very real thing.

AM: Interestingly enough, you recreated the fictional texts that you were studying as a child, and put them next to your works so that somebody else from another generation could start believing them.
BA: Yes, except that in my work there was a very clear level of absurdity that could be seen in the way the figure was photo-shopped so it was floating in the air, or in The Boy who got Tired of Posing, a narrative was created where the boy leaves. Little moments of magic or absurdity actually lightened the seriousness of it.
I’ve always felt that in our lives here, in Karachi or Pakistan everything borders on the absurd. I think it may be true also for a lot of other places. But for instance if I compare my life in Chicago, life there is very highly circumscribed and regulated, and performance and actions are very pre-dictated. The rules of a civic society and a modern city are very clearly played out and there are very few transgressions. But in our lives here, everything is happening everywhere and it’s an absurd culture so deeply full of contradictions. Here, there is modernity, there are parallel demands of tradition and religion, neighbourhoods and areas are deeply divided, people’s circulation across the city and across class is fraught, there are so many ways in which life is inherently absurd. I’ve always felt that our inspiration comes from life, but I don’t need to go out and search for the right characters and make a documentary. Instead I’ll make my own stories and invest my characters with a certain level of truth. So the characters are not actually there, but they could also be there. In the Karachi Series, the character who is sitting on the zebra crossing reading a newspaper could be real, because life does not always follow logic.
AM: I want to ask you about the designing of the entire work itself. For instance I find that in the construction of your last body of work ‘Section Yellow’, the folders, the space created by the tarmac pictures, or the people queuing and waiting, were all various characters and props of a production. In fact the objects and people were all characters within the narrative. In a sense you were allowing us to confront the event with such proximity and lending a history to everything; the folder that somebody held or the man who wrote this letter for thirty years. This kind of intricate detail that takes you into the narrative is something very unique to your work and a privilege for us as viewers who can access your narrative with such proximity.
BA: I think this happened with this body of work in particular. The film within this work ‘The Distance from Here’ itself is very tough because it is extremely quiet. It’s not like Reserved which is very familiar and anecdotal. This is almost austere in its structure and in the way it plays out.
AM: How…
BA: Well, There are two places in which the film is shot. One is the outdoor waiting area, which is inspired by the experience of waiting outdoors in the Consulate parking lot in Islamabad before the space was ultimately constructed. The second was an air-conditioned visa room. So there is the difference of sounds of these two different spaces where there are people waiting and nothing happening.